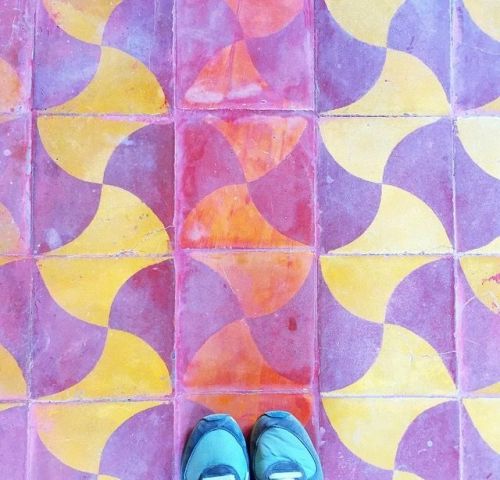 So it all started with this photo, from the Instagrammer JillinItaly, a small sweet shot of tiles on a Moroccan floor.  It actually started with my #the100daysof4square project (an offshoot of #the100DayProject) and since I have to come up with four squares of something every day for 100 days, this was what I chose.  Maybe it was the color, the interesting half-clamshell that formed a whole clamshell and an apple-core block, I don’t know.  It was just one of those serendipitous moments that made me want to struggle my way through learning how to draw it in EQ7 (I still depend on my trusty QuiltPro, but wanted to become fluent in two quilt languages).

I’m also suffering badly from Spring Fever, even worse than my students (which now you know must be nearly a four-alarm alert of Teacher Fatique and Mindlessness), so much suffering that I let them out early today.  Again.  That’s two days in a row and the kid who went his freshman year at Cornell (but is now back here) looks at me as if something was whack-o, and the kids in the back row just grin from ear-to-ear, even though I had to tell one of them she was on track for a stupendous grade of D, if she didn’t get her Stuff Together and pull it up to a sunny C.  Are you surprised when I tell you that she was completely surprised?  Didn’t think so.

So I just had to do something different tonight rather than think about all of that, and here it is: a free pattern for a six-inch block of the above.  Moroccan Tile Block six-inch  Have fun.  I have not yet made it, but Leanne of SheCanQuilt has a wonderful tutorial, complete with video, on sewing curves, so I’d check over there if I were you.  That first picture from JillinItaly’s feed just lit up my wee IG universe (click on the icon on the right to see more), so maybe it’s not the only the fabulousness of the pattern, but also those colors that say Spring Is On Its Way, or if you are in the Southern Hemisphere, it may be saying, You’ve Had a Good Summer, Now It’s Time For Fall, but I’m not really seeing more than those saturated — while also being faded — yummy peaches and golds and magentas. 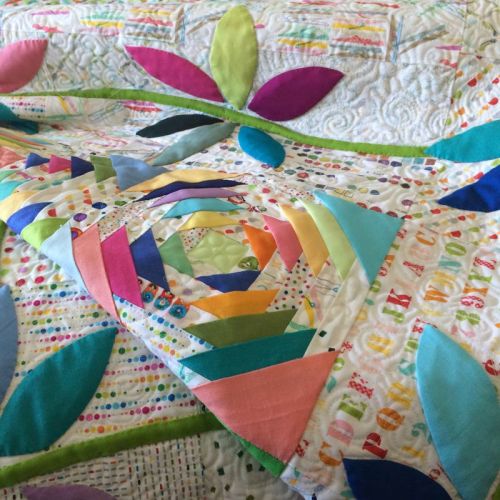 As far as the other project goes, I have not yet keeled over, but am still working steadily on getting it quilted.  I’ve already ripped out several parts, but I think I know now what I’m doing, so that’s a relief, as any FMQ quilter can tell you.  I might just yet make that deadline of Tuesday.  Stay tuned.