The mad summer of sewing quilts has come to an end.  I found the list of quilts I’d made at the beginning of my time away from the classroom, and “French Quilt” was on the top.  I’d remade this–or as I like to say–I made this twice, just trying to find the right way to show off these fabrics from France. 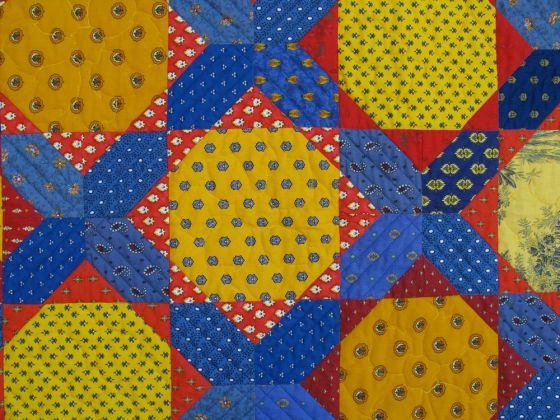 I just couldn’t decide what to quilt in the center of the yellow squares, but went with a floral motif from the border.  I had to rip out one block when it turned out I hated that particular thread.  I have picked out a lot on this quilt.  I’d originally stitched the green borders with a swirling design from that same outer border.  Wrong.  So I unpicked that, and channel/echo stitched it to mimic the blue X’s in the center of the quilt.

I chose to quilt one of the flowers in the center of the yellow blocks.

Does anyone else hate marking?  I don’t want pencil, although that is the easiest.  And since I don’t plan to wash this quilt (it’s for display), I don’t want something I have to wash to get out.  I don’t trust the disappearing markers, so that only leaves me with chalk and my ragged eye to get the job done.

And the back, with its four colors of toile.  Make that five if you count the hanging sleeve at the very top.

How did I come by all this fabric?  Like Miss Carrie of Schnibbles fame, we had traveled to France.  The first few days were touring around the south of France before we were headed to Toulouse for his scientific meeting.  We’d traveled far that one day, arriving at our B & B late (8:45 p.m.) just outside the town of Aix-en-Provence, after getting lost.  They did serve us our dinner, and the part I remember was having a chilled melon soup in the dark in their courtyard.  It was lovely, and served in a hollowed-out cantelope half that had been frozen.  The French do food right, I must say. 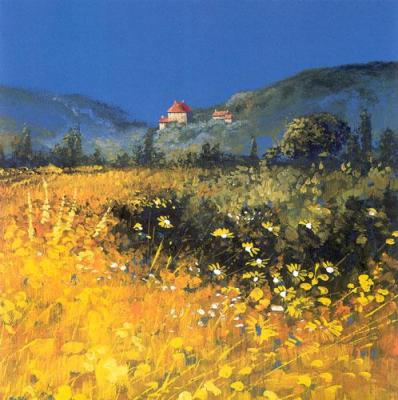 The next morning, we ate breakfast with the white mountain in view, an oft-painted mountain, then glancing at the darkening sky, checked out and drove to into Aix-en-Provence.  We were hoping to catch a market day.  As soon as we parked the car (in the carpark on the outskirts of town), the skies opened up and a huge torrential downpour kept up trapped in a deep doorway for ten minutes.  Of course we had only one umbrella between us (!), so we ran from doorway to doorway to the center of the town.  The market was closing up, even though the rain was ending–it was still quite drippy.  We caught a few photos of the newly washed melons, berries, tomatoes, when the downpour started up again.  We dodged into a shop that ringed the market square, peering out at the rain.  We were pretty discouraged.

Then my husband leaned over and whispered in my ear, “Turn around.  I think you’ll be happy.”  I turned and looked.  We had ducked into a fabric shop and although tiny, it was filled, floor-to-ceiling with glorious fabrics printed in the traditional manner of old France.  Those were the days when an extra suitcase was no problem and weight limits had not been heard of yet.  I had brought along a soft-sided suitcase and between my purchases here–and the ones the next week in Toulouse (for they had a lovely fabric shop as well)–I filled that suitcase full.

I have purchased these fabrics in other places, but this shop, found while dodging the pouring rain, was the genesis of my collection.

If you want to start your collection, I can recommend French Connections, here in North Carolina in the US of A.  They have a wide range of choices (that’s where I bought that fabulous yellow border) and I think given the cost of importing, the high price of cotton and the weak dollar against the euro, they have reasonable prices.