I’ve been thinking about what it takes to keep me interested in what I’m doing, and better yet, to find that creative task, that, when I check the time, I realize I’ve been absorbed in this task for hours, not minutes. When I used to manage the black-and-white photo lab at my local university, students could stay in there for hours, developing their prints, discussing them, claiming they were in the “zone” and didn’t want to leave it.

I’ve been on a pretty intense creative output flow, and I can feel myself wanting to wind down, and take a breath.  So I thought I’d look into this idea–of being in the “zone” or “flow” and see how it would apply to us quilters.

Mihaly Csikszentmihalyi’s book,  Flow: The Psychology of Optimal Experience has much to say about the idea of “flow” or “being in the zone.”  He stipulates certain conditions present during flow:

(1) engagement in an activity that is both challenging and attainable 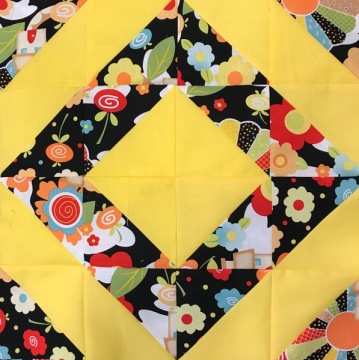 If you ask me to make simple HST quilts forever, I’ll be incredibly bored, as my skill levels have gone beyond that.  It was fun for a day, though, in Jenny Doan’s class at Road to California this past January. 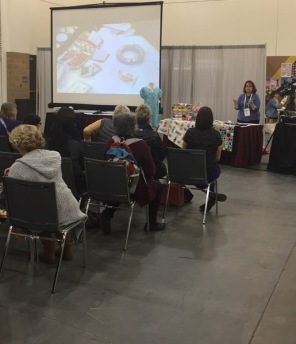 On the other hand, if you ask me to talk at QuiltCon 2018 in front of a crowd of eighty quilters with a big screen behind me, I’ll be incredibly anxious. I made it through, thanks to kind quilters.

The left to upper left shows what happens if your skill level is low, but the challenges are too high.  The bottom to lower right is when the abilities are high,  and the challenges are too easy.  Of course, we should all try to shoot on a diagonal path from low to high, to get to the flow, but often we are stuck with patterns that don’t work, or run out of fabric, or can’t figure something out, or feel frozen in our progress.

(2) the ability to keep concentration focused on the activity, and
(3) sense of control over your own actions

I lumped these two together, although they really are separate ideas.  For me, these can sometimes be hard to attain, especially if you have young children, or fighting health issues, or don’t have the right physical set-up that allows easy access to your tools/fabric/machine.  I also love seeing blank calendar days, without the distraction of appointments or errands.  I can stay in the zone for hours on those days.

(4) clearly defined goals that are within the individual’s control

Writing down a goal that says something like winning “Best of Show at Paducah” is not something within our control, because we can’t award that ribbon.  Perhaps that why we see a proliferation of techniques Finish-A-Longs, or goal-setting posts, to help us identify our goals.  I’ve found this helpful, but more often than not, it leads to a list of tasks — which we call UFOs — rather than list of goals.

According to the book, our psychic energy tends to atrophy without some verification we’re on the right track.  I think that’s also why Guilds and Quilt Groups are so valuable, but often we resort to snapping a photo and texting it to a friend.  However, I might argue that too much immediate feedback, such as our faces glued to our tiny screens checking our Instagram likes, being fixated on the number of likes can pull us out of the flow.

(6) deep, effortless involvement in the activity which removes from our awareness the worries/frustrations of everyday life.

I love it when I can forget what’s going on out in the world, listen to a book, and just sew and sew.  Or it’s like when we have to glue fabric on 500 one-inch hexies for our quilting booth at an upcoming Heritage Day Festival, and I took this task to my quilt group and we had a great time eating fresh strawberries, chocolate treats, and solving all the world’s problems. (We did get a little goofy, I must say.)

Maybe it’s not best to continually evaluate ourselves as we work, given the rhythm of this chart:

Finally, (8) some alteration of time (either “hours feel like minutes” or vice versa)

Being IN the flow, is definitely not the same ask GOING WITH the flow.  But to be truthful, I mostly feel like Sarah Cannell, when she said: “I’m either hurtling down the track not noticing the passing countryside, or standing on the platform having missed the train… The two extremes seem to smoothly flow into each other.” 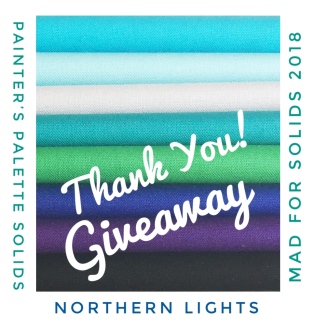 Thank you for all your comments on the Giveaway for the Northern Star curated stack of fabrics.

I used two different Random Number Generators (actually, three, if you count when I asked my husband to pick two numbers randomly, and interestingly, one of his was nearly the same as one of these) to pick our two winners:

Jamie was #7: “I have not seen the Northern Lights. However if I win, I could make your quilt (you’re writing a pattern for us to buy right?) and then have my husband hold it above me so I can see it in the night sky. Pretty clever eh? hahahaha”

(I laughed out loud)

and Joan was #71: “Oh, yes, I have seen them and should do so more often, but I’m usually asleep in the middle of the winter nights when they are most visible, and I just can’t drag myself out of my nice warm bed to stand in the frigid nighttime air to watch! Summertime viewing would be perfect, but it’s just too light outside to see the aurora even at 2:00am!” 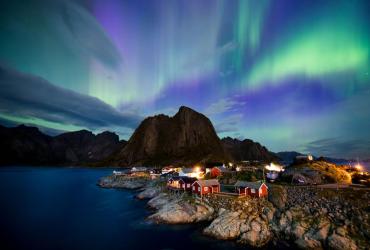 I did love these reminiscences:

The first one is from Barb: “I grew up in Winnipeg Manitoba Canada and my parents home backed onto a field so there was no obstruction of view. We could watch the Northern Lights dance across the sky many nights from our kitchen window. I didn’t realize what a special experience that was until we moved to a large city where the only thing I can see in the sky is the Moon and a few bright stars and planets!”

Another one from Edith: “I used to be able to see the Northern Lights in my hometown of Medicine Hat, Alberta when I was a young girl. I used to sit on the park swing and be able to see them over the hill in front of me, but since the city grew and more lights were added, I must say I have’t seen them in a long time.”

And last one, from Holley: “I have seen the Northern Lights many times starting as a child growing up in Iowa. We didn’t see them often but we did see them from time to time. I lived in northern Minnesota after college. This was at the time of missel silos and ICBMs so when the northern lights looked like rockets shooting across the sky it was unnerving. When I lived in Wisconsin near Chippewa reservations I was told the lights were the old people dancing and that was the way they looked. I’ve seen lights in Alaska was I was babysitting grandchildren and in the Scottish Highlands when we lived near Glasgow. I have a quilt started that I call Northern lights that I hope to finish one day soon. The colors and patterns vary depending on location and weather but they are all wonderful. Thanks for sharing yours.”

Ladies, you are living our dream.  Thank you all, again.  Guess what?  Another giveaway is coming on Wednesday, when I show you some secret sewing I’ve been doing for Simone.  See you then!