The brains of the meeting.  I’d done some prepwork (looking at the website) so I knew what I wanted to see.  The very first thing: see the vendors.  I told my husband it would be like going to Disneyland for quilters.  Everything was new and different to me, but since I only have a small suitcase, I had to choose fun and interesting things. 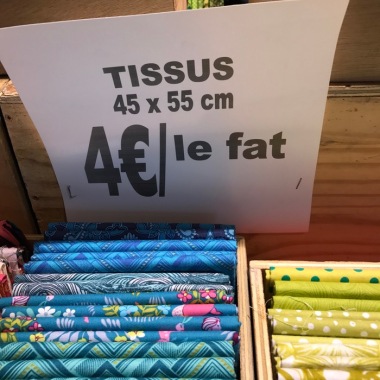 Since fat quarters were running about $5 a piece (with the conversion rates) and fabric was 22 Euro (about $25 dollars) per meter, I knew right off the bat I wouldn’t be buying any “American” fabric, and gained instant sympathy for European quilters at these prices! 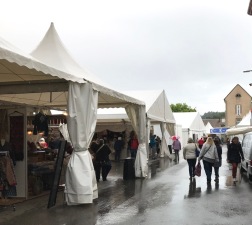 The vendors were in a combination of inside “Espace Commercial” and outside tents, with one side of the tent opening to the passersby (and the weather).  I saw many of the drapes drawn to close in the booths when it was raining. 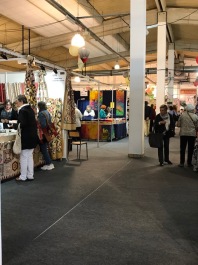 The Commercial Space was weather-proof, but hot and stuffy.  I took these photographs early in the morning.  When we doubled back before leaving, it was very crowded.

Who wouldn’t want to shop at this booth, with its array of Kaffe fabrics and a vendor with bright pinky-red hair? 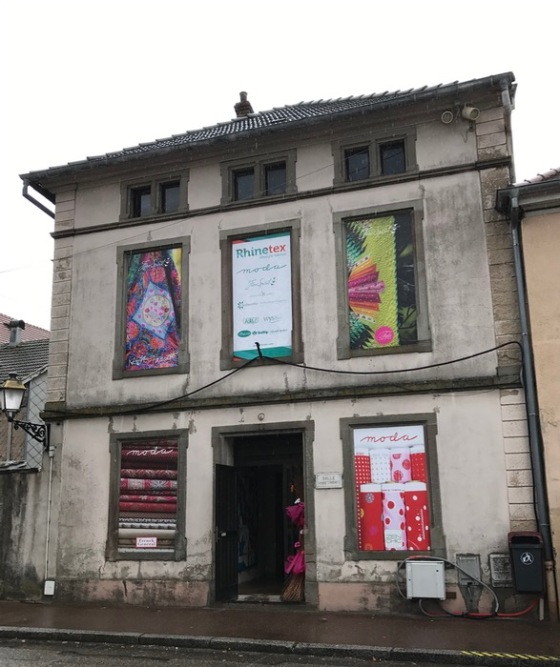 This isn’t exactly a vendor, but the distributor (Rhinetex) who’d rented out the ground floor of this old house, displaying some Moda fabrics (don’t they always do it spectacularly?). 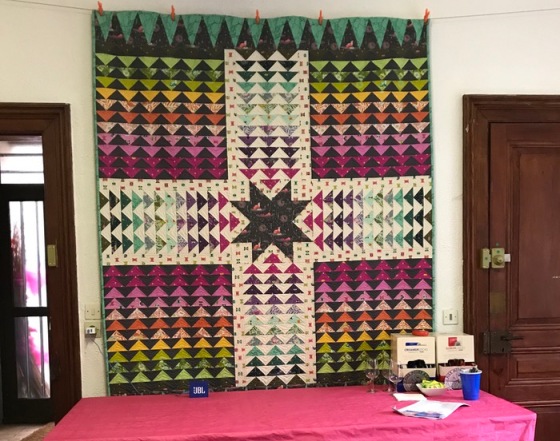 And inside, the famous Tula quilt for her new line, and a sweet scene at the fireplace, with their logo on the felt backdrop.  Lots of quilts in here, and it was fairly mobbed. 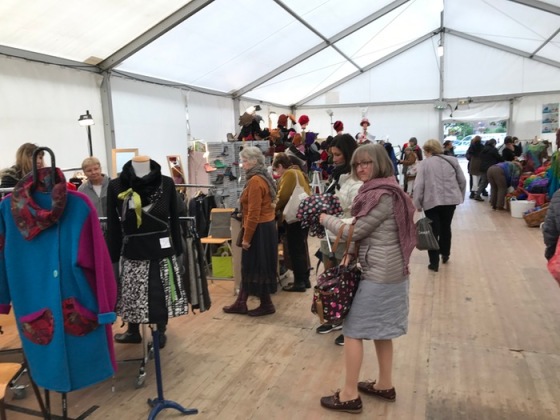 The last venue I want to mention was titled “Les Createurs” and was filled with beautiful handiwork from “designers and craftsmen.”  I definitely coveted a few pieces of jewelry, as well as that blue coat in front. Now to show you what I bought and what their booths looked like.  I asked permission for all photos, but was told more than once they’d only like me to take a “general” photograph (imagine this word with a French accent); I totally understood their request and why they made it.

These folks are from the west side of France; she has a book out (I saw it at the book booth, but since it’s all in French, well…)  I’m always thinking small, so I picked up these two fat quarters. 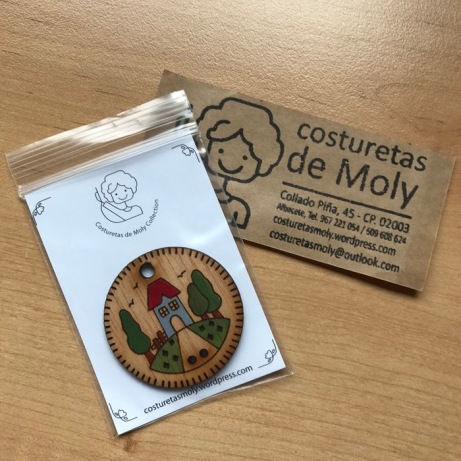 Across from them was the Costuretas de Moly booth, with the most charming kits and small handmades.  I saw a lot of sweet little bags and pouches with detailed scenes appliquéd and embroidered on the fronts and backs.  They are from Catalan, Spain.

A small bracelet, a quick blurry shot of the bins of bracelets (they didn’t want their booth photographed) and random German Christmas Tree, the only thing I regret buying.  The vendor had tacked green rosettes of fabric around all the outside edges, and I thought maybe I could tie on some green primitive rags instead.  Oh well, we’ll see. 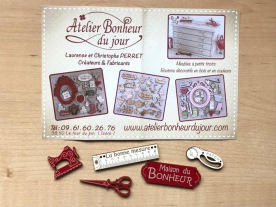 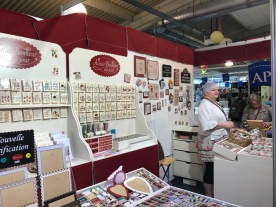 The handmade, laser-cut embellishments were purchased next, from a booth that made it hard to decide, given their categories of sewing, animals, children, family, house, etc.

Even though I said to myself “no fabric” the Filarte booth drew me in with their linens.

My husband and I both liked the scarf on the outer upper edge of the houses, but when I tried on the leafy print next to it, well, that one came home.  It is wool and cotton so I will be very warm in sunny old Riverside. (I’m wearing it now, as I type this next to the chilly window in our hotel in Geneva.)

I had a total fangirl moment when I realized whose booth I was standing in front of: Un Chat dans l’aiguille.  The lady on the right is the artist who makes up all these beautiful pieces (and whose name I think is Christel–hard to figure it out when you don’t speak the language).  I fell in love with her Matryoshka needle case, that I saw in a shop when I was here in Geneva last year, but they didn’t have any more (it’s out of print).  So when I got home, I looked up who made it and read all about her and her designs.

But what to chose?  None of them are cheap, so I had to choose carefully. 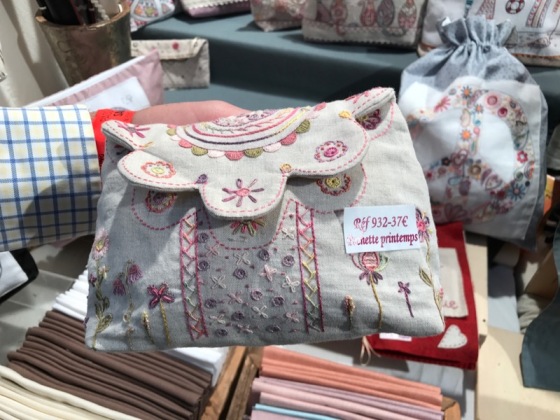 I went with this little pouch with all its flowers and scalloped edge detail.

When I looked inside, I can see why her kits are so popular: everything is well-labeled, ordered and she even included a needle. 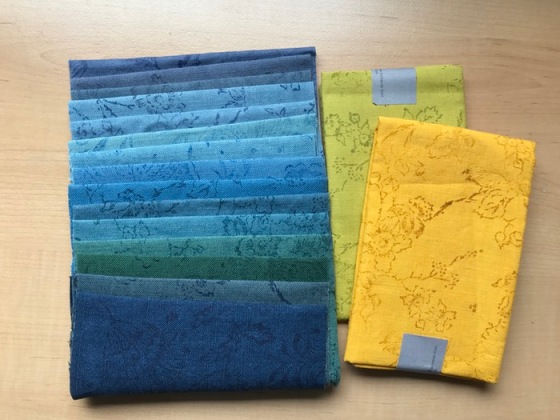 Sometimes what draws you in to fabric is that it is the exact opposite of what you’d normally buy.  Like the dusky shades of printed and dyed linen on the left.  Then you spend the next two hours mentioning to your husband that it won’t be enough fabric to do anything with, so you circle back around (my husband is a saint) and then pick up two more fat quarters to round it out.  I’m assuming it was the wife of the man (below) sort of strongly suggested that it was not good to put the heavier weight linen next to the quilt-fabric-weight linen on the right.  But I loved the look of the thicker threads in the first pack and couldn’t be persuaded to change.  If only they’d had the colors on the right in the heavier.  The vendors are from Germany. 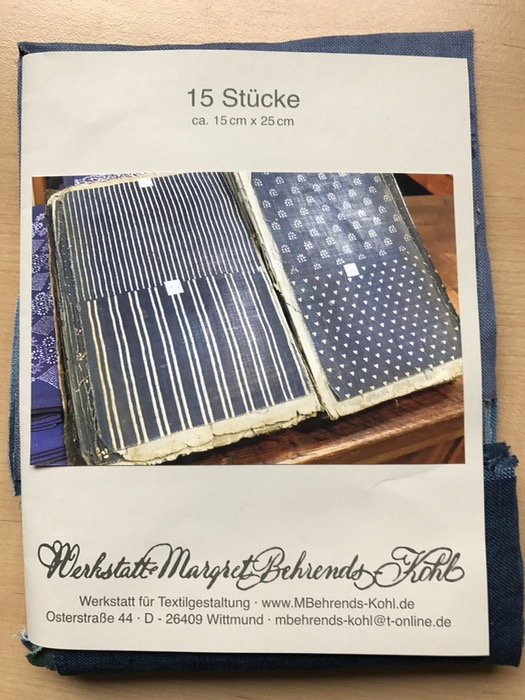 Here’s the back of the package, in case you ever run into them.  Like I said, nearly everything I saw was unique, unusual, and not seen in the American markets. 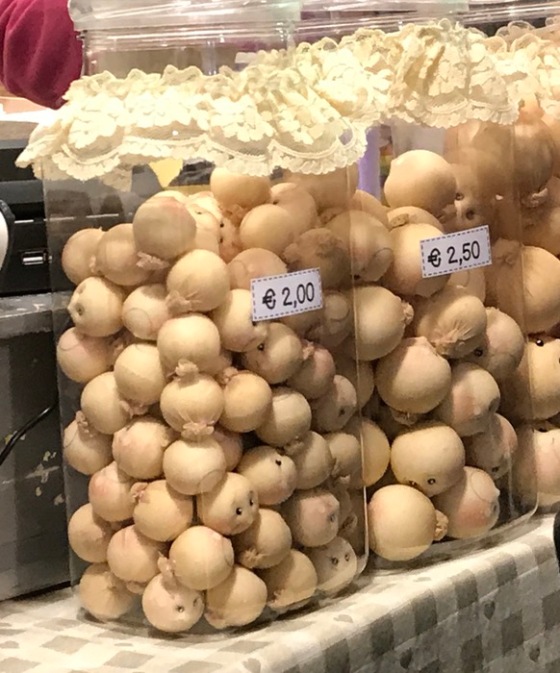 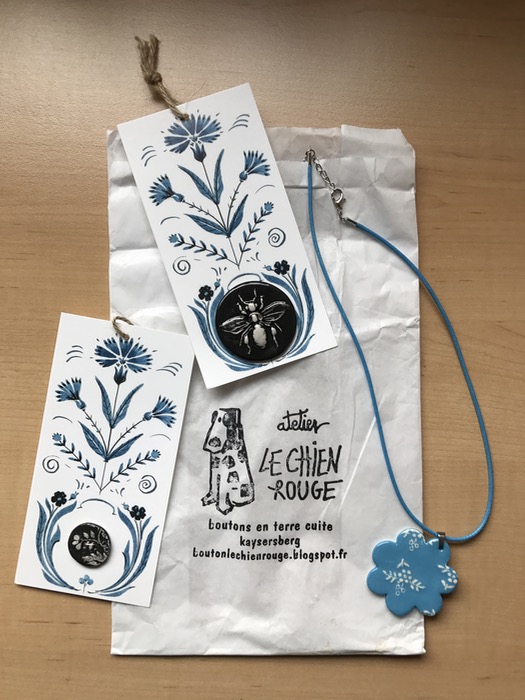 We saw this sign while walking between exhibit locations, and entered into the little lane where several booths were set up with bolts of fabric.  At the back was a burned out house (?) with buttons for sale in what looks like the garage.  Or maybe the whole house was under renovation? 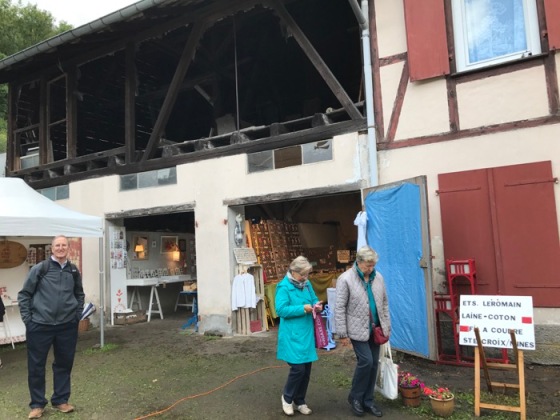 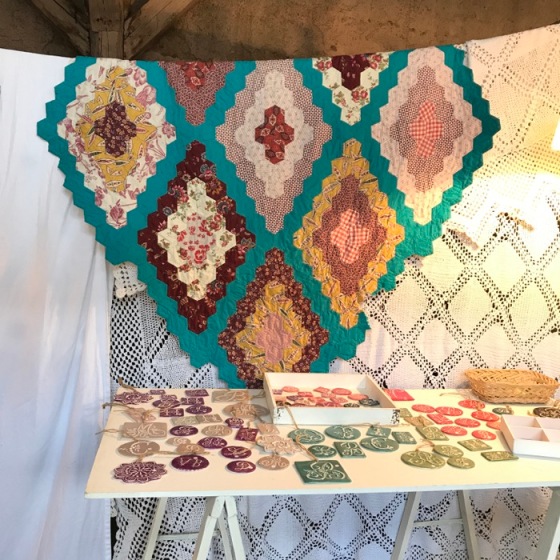 The quilts are pretty backdrops for what I purchased: the two buttons, above, and a necklace.

The penultimate purchase was this dishtowel from the Beauville exhibit in Sainte Croix-aux-Mines, one town away from where we started.  I have one more purchase, but I’ll mention it when I get to the various exhibits. 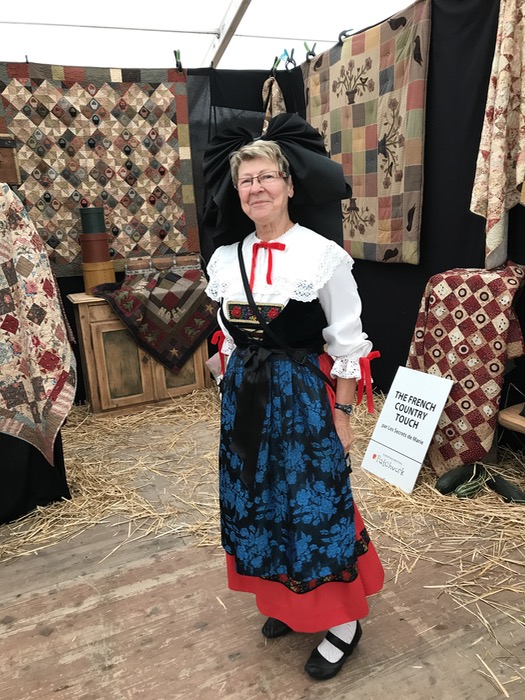 Here’s the woman in the Alsatian dress again.  It is so beautiful, and of course, I wondered where I could get that apron fabric.  We saw her again later in the Old Theater venue, so stay tuned.

18 thoughts on “Shopping at the European Quilt Meeting”