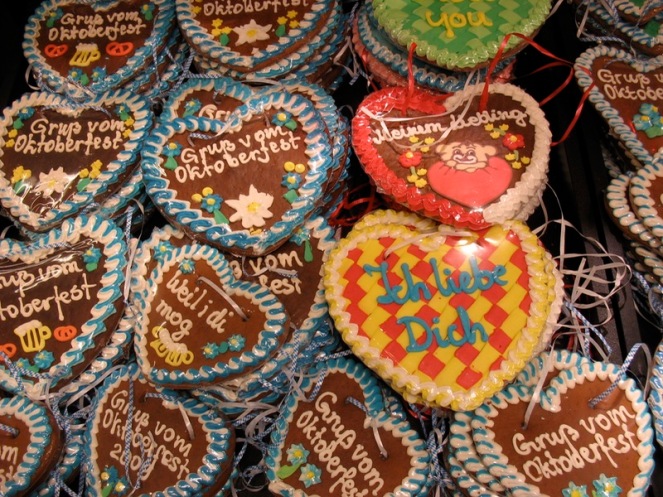 While I really love the festive cookies sold during Germany’s Oktoberfest, it’s the giant pretzels I really miss. 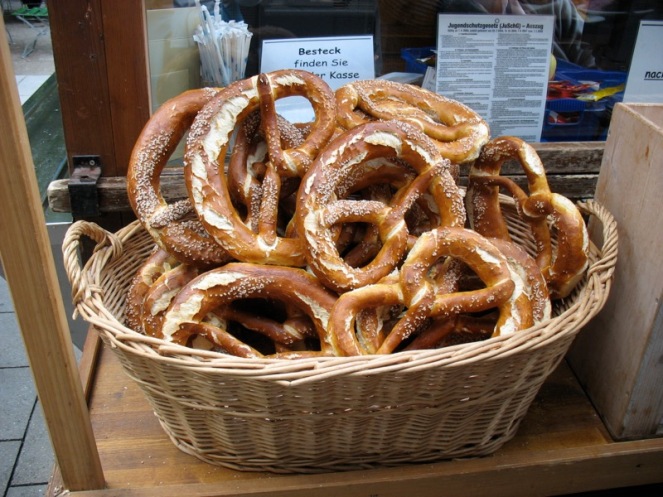 And who can forget the cute dirndls, wore by the most traditional Bavarian women? (I have three, all made by hand with fabric lugged home from Munich.)  But in honor of those weeks of partying they do in the Bavarian Alps, I’ve been partying here in my sewing room, finally gaining enough stamina to put in nearly a full day’s/several days’ worth of work.  In other words, it’s catch-up time.

A package of blocks from our Traveling Threads Bee finally caught up to me (we’ve had some delays) and I placed Amber’s blocks (she blogs at One Shabby Chick) all over my design wall to admire the handiwork of my beemates.  So often when I get a batch of blocks, I recognize that there is a different goal for those of us at the end of the bee.  Those at the beginning work on creating blocks and filling up the holes.  But if you are towards the end of the trading circle, a good look at the quilt is necessary, asking: what does this quilt need?  In this case, it needs some negative space, the hint given by that lone six-pointed appliqué star there on the turquoise background.

The theme of this quilt is “I love you more than all the stars,” with the request to make pink stars on a range of blue backgrounds.  Amber also included this really cool lame cotton, which of course I couldn’t wait to use.  I kept singing the lyrics to Good Morning, Starshine in my head, and realized that’s where I needed to go.  So above, are three starshine blocks.

I tucked them in around the edges of the quilt, pronounced it done, packed it up and mailed it off to the next partner in our bee. 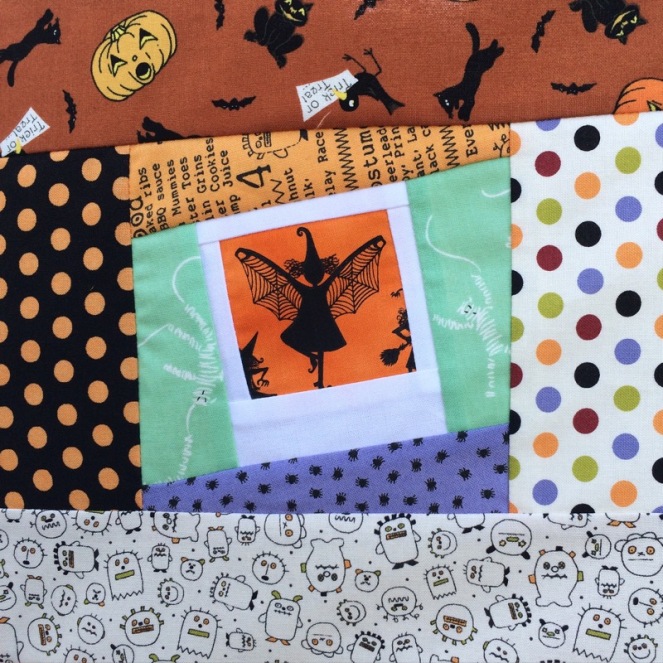 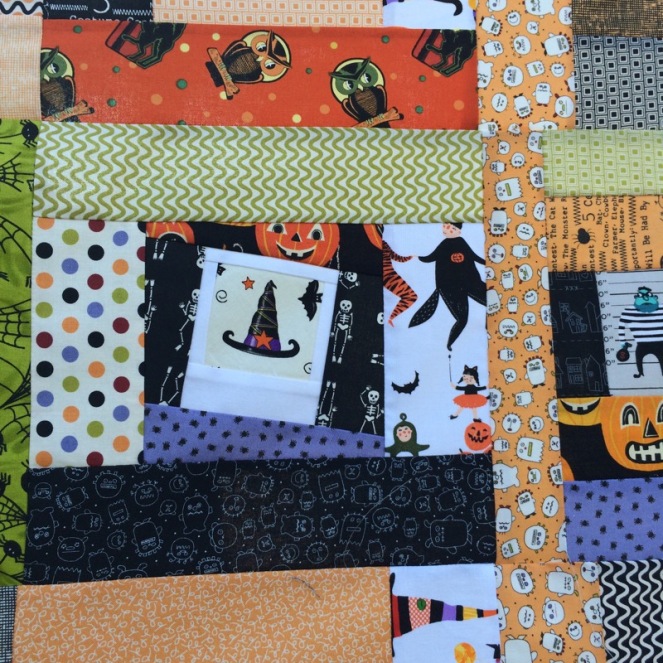 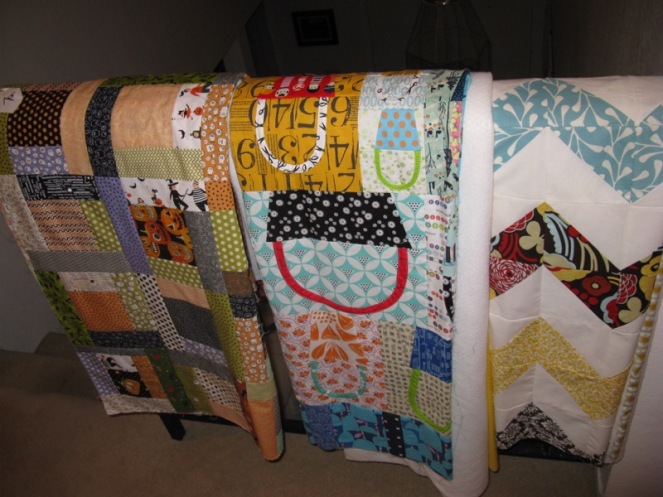 This, along with my basket quilt and another quilt Lisa and I finished for a friend, are now at the quilter’s.  Yes, I’ll enjoy my Halloween quilt NEXT Halloween.

Except that there may be another quilt joining that one: this is our stack of fabrics from Primitive Gatherings quilt shop (and there are a few more from Temecula Quilt Company) that Leisa and I put together, so we can make this:

However I promised her we wouldn’t start on it until after the holidays, so the fabrics are stashed away until January. 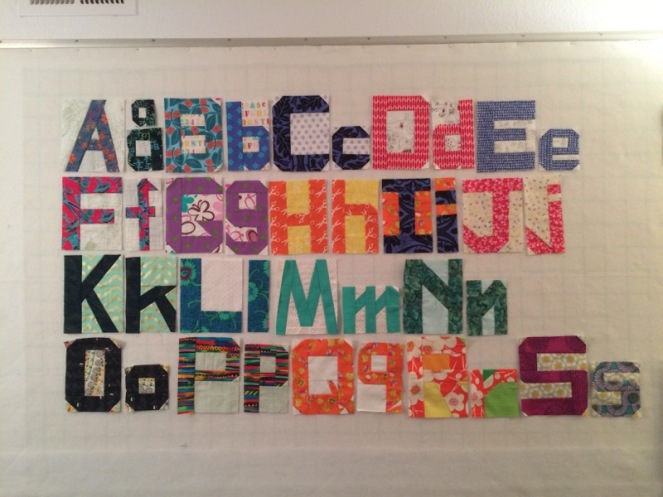 And I’ve made it up to T/t on my Quilt Abecedary project (T/t were too shy to pose for a photo).  Only a few more, then I’ll need to start really honing in on the theme of my quilt and what I want my Spelling Bee-mates to make for my quilt.  I’m first up in January, so I’d better get cooking.

It’s nice to be looking far forward once again, rather than just hoping I can make it through a day at a time.  I used to do quarterly goals for several online finishing collaborations, but have fallen out of the habit of looking ahead, bogged down as I was in this summer’s detritus of the here and now.  I still don’t fill up my schedule book too far ahead, not knowing if my stamina will hold out.

And does it really help to focus on your goals?  We’ll never quell that controversy, but according the article, How Goals and Good Intentions Can Hold Us Back on the 99u blog, focusing exclusively on your goals may “spoil your experience of the activities you’ll need to pursue.”  Even the first article linked above notes that “relentless fantasizing may actually reduce one’s odds of achieving goals.”  But, rather, “adopting the mind-set that your strengths and abilities are not fixed, but can improve over time and with effort, can have self-fulfilling results” (99u — always a good site for reading about this sort of thing).

For this reason, I’ve found often that reviewing my achievements often provides motivation to go forward, a sort of “I finished that one, now I can finish this” one sort of process.  Or I can say to myself, “I like the feeling of having completed this,” and enjoy the feeling like when I walked out of the post office yesterday, having mailed off a bee-mate’s package of blocks. 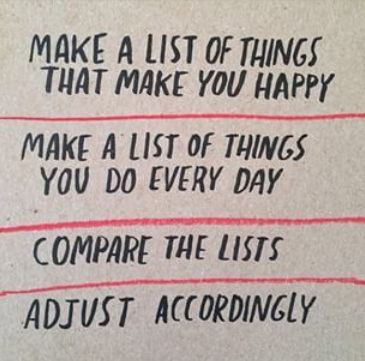 I plan to quilt.

10 thoughts on “Oktoberfest’s Blocks and Quilts and Plans”