Here we go again, with the second block in our slow sewing, English Paper Piecing, series of circles.  While I call it Sunshine, because of the fabric I used, the official name is called Kansas Sunflower (I like it best when we quilters acknowledge the history of our blocks).  Barbara Brackman’s book shows its origin around 1928.

(Note from the 2020 Elizabeth: A new, revised pattern is coming soon, so I’ve removed the old ones from the following posts.  Many thanks.)

This one has a large center circle, which measures a bit under 5 1/2,”  but I would cut the fabric circle for the center at 6″ diameter, because I think having the extra bit of cloth is better.  To get a smooth template to gather it up over, iron two pieces of freezer paper together, then trace the circle.  It should give you enough stability.  Or do as I did: head to your iron, and using the tip, iron it in small bites around your paper circle, then sew it to the paper. 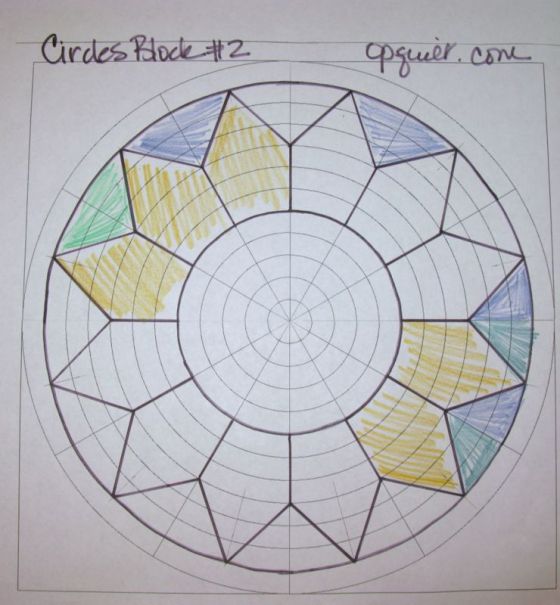 Here’s the sketch of the block.  On the lower right you’ll notice that I colored in one half-arc green and one half-arc blue.  If you want to split yours up like that, I included just one tracing of that as an option, but you could also just cut the other arcs in half and go at it that way.  I prefer the larger outer arc. As before, in Circles Block #1, there is an assumption that you know a bit about English Paper Piecing, where you take the pattern, lay it out, then fold the seam allowances back over the paper pattern, then baste.  Others have used freezer paper, or glue.  Do a Google search if you are curious about these other ways of securing the paper.

I wanted to use a chevron for the “petal” piece, so I fussy cut them so the chevron stripes would meet along the sides.  I pin down my pieces (since these are symmetrical pieces, it doesn’t matter whether the printed words are up or down), then just freehand rotary cut around them.

After basting the seam allowances down to every pattern piece, I stitched the petals together in two groups of six.  Then I sewed the arcs in between those, as shown below:

I stitched those two flower halves together, then the last two arcs, then laid on the center.  I don’t know why I chose this orangey-red; it just spoke to me.  I had already basted the seam allowances down so I just arranged it on the petals and pinned it down.  I appliquéd it onto the petals, and that’s when I discovered that maybe a 6″ diameter circle might make you happier as it’s a scant 1/4″ overlap in some places.  Then the fun part: taking out some of the papers.  I released the center circle basting threads and the petal basting threads and took out those papers, but left the papers in the deep blue outer arcs.

I’m putting the photo in again, because now you have a decision to make: do you want those four seams in the outer pieces to line up with a point?  Or to be offset (like mine)?  I went back and forth and decided I didn’t want it so busy–I liked the slightly off-kilter look of not having points dead center at Noon, Three, Six and Nine O’Clock.

I don’t think there is any easy way to get those four outside pieces on.  This is how I do it: I stitch the seams between parts #1 and #2 to get two pieces hooked together, then pin it about four places around that the #1 arc of the outside circle.  I begin at the lower center  (XX) and stitch around that 1/4-arc, stopping one inch short of the next seam allowance.  Part #2 is just flapping in the breeze.

UPDATE: After doing a couple of circle blocks I found I liked it better using a 14 /12″ square and appliquéing on the circle.  Your choice.

Then I go back to where I started stitching (XX), and stitch the other side (#2), using a few pins where needed (not too many, or it’s ouch-ouch-ouch).  I then seam together pieces #3 and #4, and repeat the process.  As I draw near to the #2 piece, I thread a different thread, do the seam between #2 and #3, then tie it off.  I go back to the thread I was stitching with before and then finish it off.  Repeat for 1/4-arc #4.

I just reread this, and if you are confused, I don’t blame you.  It’s just hard to navigate those pieces when they are backed with paper, and I get tired of fighting with them.  I suppose you could just seam all four outside corners together, then pin and appliqué it down like you did the center circle.  I don’t think there is a wrong way or a right way to do this.  Have fun and let me know what works for you. 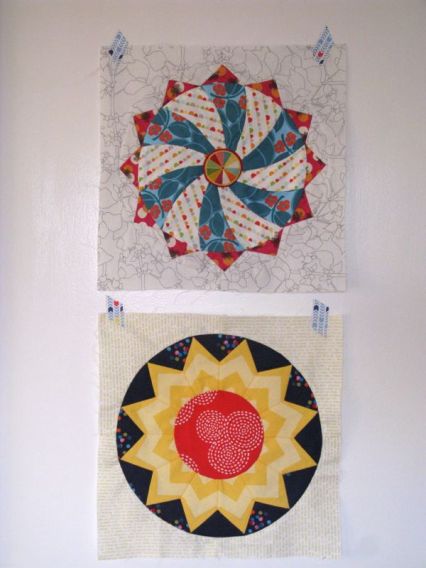 Are you worried about the fact that my circles aren’t matchy-matchy?  Sometimes I was worried about that too, but then in the previous post I noticed that there was such a variety of circles and colors in a couple of those quilts, and calmed right down.  Keep going.  Keep stitching.  Have fun.  Next circle block comes up around the first of August, right after our Four-in-Art Reveal of Contrasts.

I’ve started a tab, above, with all the blocks and their posts, for easier reference.  By the way, there is no big deadline for any of this; I think I’d have a heart attack if I had one more deadline.  I just wanted a project to put in a little box and carry with me on car travels, on vacations, and while I collapse in the heat at night on the sofa to watch a good movie. (And given that it will take me several months, I may be curling up under a quilt in the cold, still hand-sewing.) Just know that it’s here if you want to make some circles, or a pillow, or need a hand project that is an alternative to 5,000 hexagon papers.  If you do decide to make one, or several, send me a photo and I’ll put it up here on the blog.  Have fun sloooow sewing!