Red, White, and Blue giveaway info is at the end of this post.  Many thanks to all who entered!

If my grandchildren come to visit me long enough, we can crank out a quilt.  Last time it was Keagan’s.  This time, it was Riley’s.  I discovered last time that simpler quilts are best, so I started leafing through my BLOCK Magazines from Missouri Star, until I happened on her pattern titled Slice of Life, found in Volume 1, Issue 4.  You can get a download here.

Riley picked out blue and green prints from my stash (using your stash is also a good thing to do) and he ironed while I cut.  He arranged the squares on the wall into groups of nine.

Originally the book called for “layer cake” squares, which if you have a layer cake (or have the pre-cut sizes memorized), you are set, but I don’t.  I get grumpy when patterns call only for precuts, and don’t tell you what the actual dimensions are, so I’m telling you that I cut squares that were 10-1/2″ square. [Yes, I know they are bigger than a layer cake.] I narrowed the sashing, cutting it at 2″ (sewn in it will measure 1-1/2″ wide).  You make three of these giant nine-patches, then cut them apart like this.

I cheated a bit, and folded the giant 9-patch into fourths, and took a bare sliver of fabric off the fold when I cut–kind of like when the local quilt shop cuts fat quarters.  Then we arranged these new designs up on the wall.

Sometimes Riley took a break with his little sister. 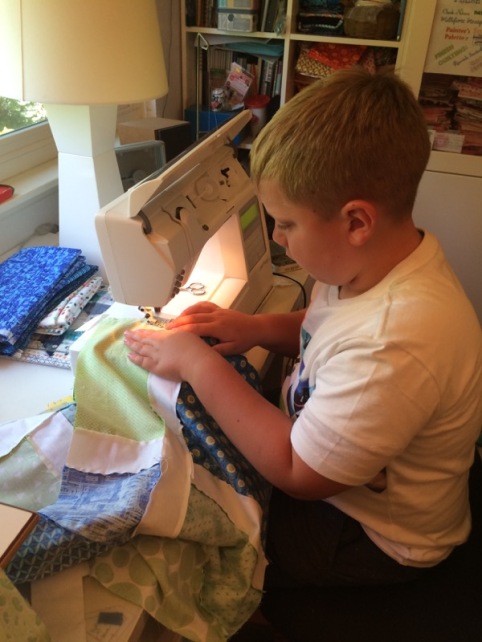 I sewed the giant pieces together, but sometimes Riley did.  I pinned it a LOT when it was his turn at the sewing machine, also teaching him not to sew over pins.

Everyone helped pin baste the quilt on the kitchen counter.  We would pin a large section, then shift the quilt.

Everyone helped quilt, even the littlest sister, as well as my daughter, mother to these three charmers.

Binding was next, again from the stash.  Late that afternoon, they went to the beach and my husband and I headed up the mountains to our church’s camp for the young women.  I sewed on the binding all the way up, and while we waited for the program to start. I finished it. 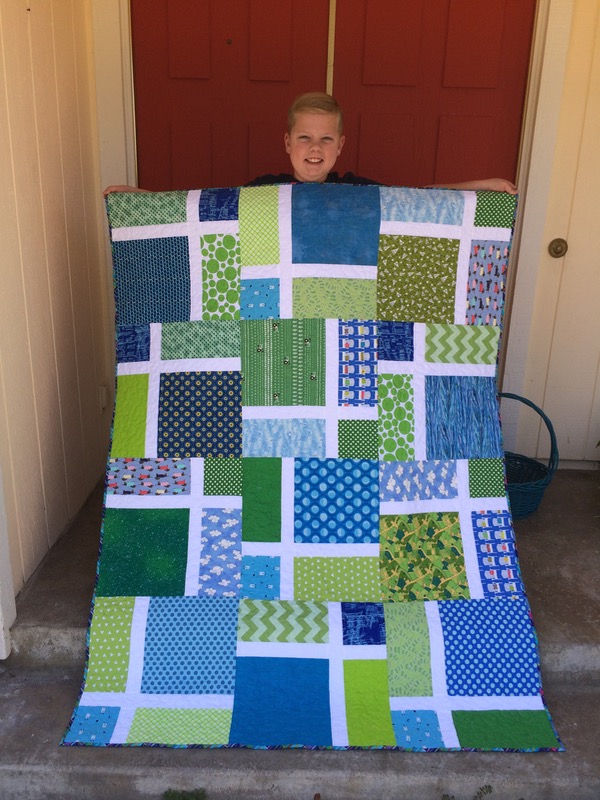 He couldn’t think of a title, so I wrote a couple of details on the back.  I think this is the section that Riley quilted–I think it’s great that he helped in all phases.  This is Quilt #184 on my 200 Quilts List.

The youngest of these grandchildren is eight years old, so I imagine her turn will be next!  Baby Blues comic strip ran these this week, and I thought it fitting (although the sisters do quite well, too!)

Congratulations to Nancy S. who won the bundle of Painter’s Palette Solids!  I’ve been in touch with her via email and will get the bundle sent out to her.  I had the best time reading over all the comments about fireworks, from those who had a first date watching them (that happened to me, too, early in our courtship) to those who watched barges-full launch them into the air.  Thank you all for your wonderful responses!! 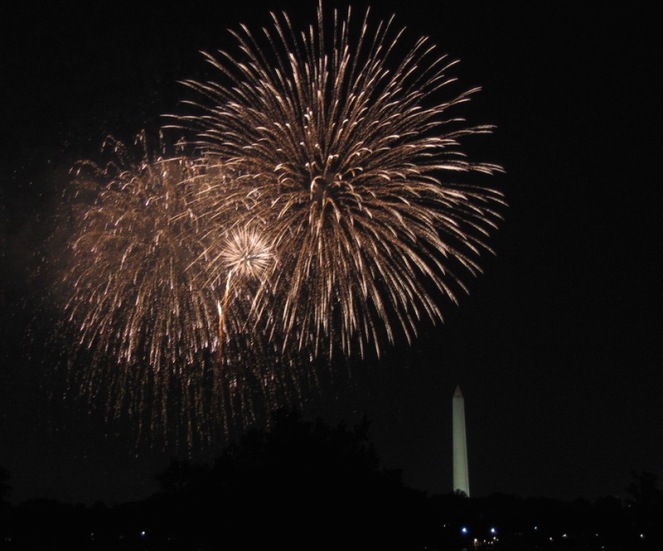 (This is for those who mentioned that they watched them over the Washington Monument.
I did too.)