In deep summer, everything moves a little slower because of the heat.  The sewing slows down because we’re at the beach, or watching Endeavor on the television, or just lazily talking after dinner on the patio.  The dusk deepens, and we realize we’ve talked the evening away as we flip on the overhead twinkle lights and talk some more, maybe eating an ice cream bar.  Or something else cold and slippery and refreshing like a tall lemonade.

So I sip some lemonade while fighting the urge to take the scissors and whack off this veritable mountain of seams on the backside of Circles Block #2, which I’m currently working on.  I’ve made this section twice, and have now realized we need a Design Change.  It will work fine, but in Deep Summer, it’s best not to be thinking too hard.

I finished the block this morning (this is the backside–full reveal the first week of August), went to add the background corners and realized I’d drawn the whole shebang one inch too large all the way around.  I slumped into my chair–it’s really too hot to do anything else, right?  Then after slumping for a while, I got up and redrew parts of it to make it conform to what we have going on so far in Circles Block #1 and #2.  I’m NOT remaking that center section, though, having already sewn it twice.  It will all be correct when I finally post it, and tested.

We had our annual Good Heart Quilters Retreat at Lisa’s house, and were joined by her two sisters-in-law, who traveled down from the Mountain West to join us.  This is just the first batch of quilters in the moring–more came and by evening, when the fudgy brownies came out of the oven, there were many more.

Jean was a phenom, getting several quilt tops to the finished stage so she can quilt them on her machine.  Others quilters were just as industrious, but I was head-down-fingers-stitching on the Circles Block and forgot to take photos. 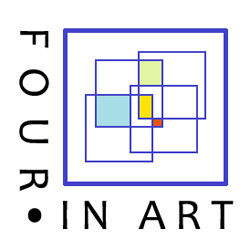 I also finished my Four-in-Art quilt, but that reveal is not until August 1st, so check back then.  I really like this one and tried a new technique of printing on fabric.  I’ll share the quilt and all the “deconstruction” details next week.

And in Deep Summer maybe something we ought to do is read a poem or two, while sitting outside under the twinkle lights on the patio downing the last of the frozen peanut butter cookies — a poem like this one, by Susan Hutton, found *here.*

My neighbor, perched high on a ladder
one weekend afternoon,
trimmed the wrong branch and sent himself
slowly wheeling through the sky.
He curved through the air as smoothly
as if he’d been drawn with a compass,
a graceful inflection discordantly accompanied
by crepitating branches and breathy leaves,
and landed in a lush, bent sapling.
To call it beautiful misses the point.
To say he stood and walked away unharmed
is true. For fifteen years I’ve remembered that shape,
its pace, but it’s the moment when he understood
it would happen that I return to: that fear,
and whether he resisted it or surrendered.
How often it happens that we step, half-consideringly
into the impersonal forces at work,
unable to pull ourselves back.
The tread of the stair beneath our feet
the appalling speed of our own blood.
The fifty years of our working lives limit our thoughts
as the pyramids’ size was ultimately determined
by what they could build within the pharaoh’s life.
The arctic whale moves through the water
with a century-old, ivory spearhead buried in its flesh.
My son was born early, before his body had developed
the reflex to suck. He spent his first two weeks alive
covered in wires and tubes amid loud, beeping machines.
I did not know him yet, in the lasting way,
but I saw he had my grandfather’s face.
And oh I was afraid. And we moved through it.
SUSAN HUTTON
Michigan Quarterly Review
Spring 2014