To prove to my Mid-Century Modern Bee, that I am on task, getting ready for their blocks, I decided to start on the center Santa.  And instead of raw-edge fusible applique, I went with needle-turn hand applique.  The directions are sketchy, at best, on this center square, just the big piece of art (shown in disguise, above) and a note to cut the finished center piece to 24 1/2″ square.  I didn’t catch that one at first, and started appliqueing.

I traced the pattern, in reverse (taped up onto a window) onto freezer paper, which I then ironed onto the top of the fabrics, and cut 1/4″ around. This pile was where I started on Saturday morning, while I listened to our church’s General Conference, a respite in the wild and crazy world. 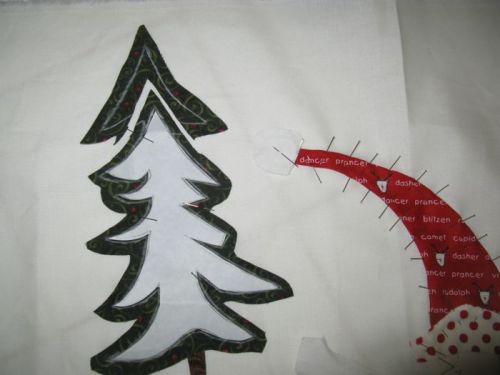 I was pretty far along when I realized that the picture was too big for the alloted measurement, by 1/4″, and that was with no seam allowances.  So I cut the top of the tree off.

This is where I am tonight.  I must have really gotten excited about shrinking this as it now measures 22″ top-to-bottom approximately, but now I have enough room for a smaller inner border of red.  That’s the quibble.  Now to the Muse(s).

My grandchildren came for the weekend.  This is the first set (4 girls) –well, three of the first set.  We made cookies that we later decorated when the second set (4 boys) arrived.  I’ve made each grandchild a quilt, so you could say their very arrival on this earth served as inspiration.

The father of the four sons, Chad, is on the left and the father of the four daughters, Matthew, is on the right, flanking my saintly husband.  While they look fully grown to you, in my mind, their are young boys, scrappily fighting in the upstairs bedroom over who gets the Transformer toy, like Chad’s boys in our front room shortly after they arrived.  Boys will be boys, and that always involves a bit of wrestling around.

I was the muse for my sister Susan, when she made me this beautiful shawl/scarf, which I’ve already used a couple of times to keep me warm while grading.  A noted historian, she writes comments on my blog like:

“I find the names of these blocks quite interesting in their historic nature. Fifty-four Forty or Fight refers to the battle over the Oregon boundary between US and Great Britain. It was a campaign slogan in 1844. Clay’s Choice no doubt refers to the great Whig politician Henry Clay, who helped broker the Missouri Compromise that would set back the sectional conflict until the eruption of the Civil War in 1861.”

I love her and was glad to learn about my quilt blocks!

My quilt group is also inspiring–we’ve been going strong for about fifteen years, and Caitlin (above) is a new member with her first quilt top, just finished last Friday night.

I saw this when we went to Greek Days at the local church, just a couple of miles from us.  It reminded me of the Marcelle Medallion, which has been so popular around the web, and I can’t tell you how many pictures of stone floors I have from around Europe, quilt patterns in all of them.

I was quite impressed by the stories told by the priest, as he led us through his sanctuary, telling us of connections both modern and ancient, and it was an interesting point and counterpoint to the thoughtful talks I listened to in my church’s conference, as all these things remind me that we are more alike than different in our hearts and our minds, whether or not we worship the same.

This morning, we tiptoed out of the house, the grandchildren still asleep before their big day at Disneyland, to see this glorious sunrise.  We stopped to take it all in, then moved on, pausing at each street, savoring the changing colors.  This, too, is a muse of grand proportions.

It seems that every time I hit a rough patch, it stills me enough so that I can move in a new direction.  Who would have thought that after finishing Kaleidoscope, with all its fussy English Paper Piecing, I would be appliquing a Santa down to a new square of cloth?  But this is the direction the Muses have beckoned me to follow.

I am always frustrated by the rough patches and I can hear my parents chuckling in the background, as they know I like things to always be still and placid and never, ever, in turmoil.  I’m a harmony junkie, if you will, not only in relationships, but everywhere in my life.  “This too will pass,” my father used to say to me when I’d come to them in tears, upset by something or another, yet I always found it hard to believe their soothing counsel.

But I feel quite enriched this weekend, in spite of the chaos of an afternoon of eight children.  I savored their noise and games, hoping it would never end, but of course realizing (that for sanity’s sake) it needed to.  The trip to the Greek Days Festival on a hot October’s day.  A visit to my sister last week.  A new sewing project.  Thoughtful and touching messages to the heart.  And last, but not least, the best inspiration of all: the anniversary of our first kiss, twenty-five years ago.

May your muses find you this week.  Happy Quilting!

13 thoughts on “A Quibble and A Muse or Two”