While visiting relatives in Utah, just before I tucked into the new semester of teaching (which would explain why I have been AWOL for a couple of weeks), my husband and I headed to Salt Lake City’s newest museum: The Natural History Museum, high up above the University of Utah.  It is a gorgeous museum, complete with artifacts, history and dinosaur bones.

But I was more interested in the woven baskets in the Native People’s exhibit.  I guess I’m fascinated by color and pattern, in all forms.

Which is why I found this piece of art, in the Millcreek Library so fascinating.  That library, where my sister-in-law Annie works, has a Senior Citizen’s center, a gym, a cafeteria and of course, art. 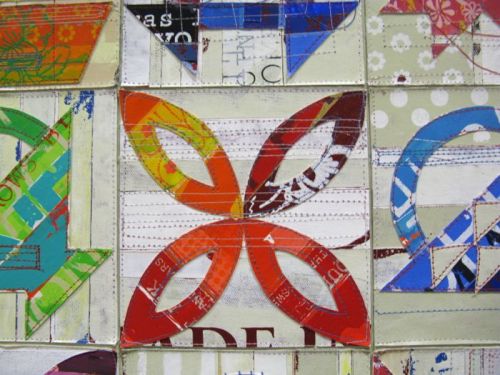 This appears to make of some sort of plasticized material–almost like a thin linoleum, cut and sewn in quilt patterns.  I loved it. 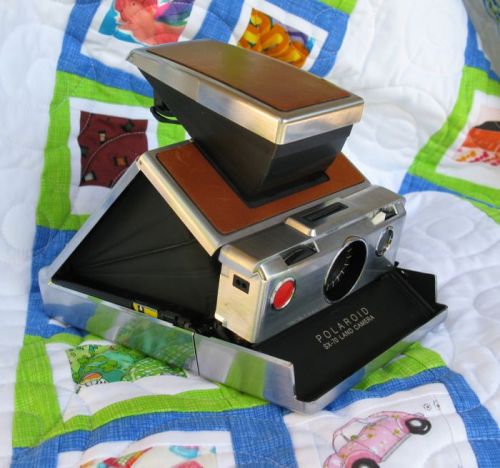 I had brought up my Polaroid Quilt to show my mother, and my dad held up his finger as if to signal a pause and came back carrying this: a genuine, bonafide Polaroid camera.  Of course, there’s not any film to be found for it anymore, but I thought it deserved a picture with the quilt.

On the way home, we headed to the Springville Art Museum, which hosts a quilt show every August.  I snapped a lot of photos, but here are just some of them.  This one is titled Juxtaposition and is by Marilyn Landry Toone, and was inspired by her daughter’s choice of fabrics from her “fabric stash of 40-plus years.”

I’ve Had the Blues is made by Jacque Thompson and quilted by Kim Peterson, and was made “entirely out of scraps using one-inch strips.”

Detail of the beautiful quilting.

Kristen Roylance’s quilt Posy Patch was made using a modified disappearing 4-patch block, and was quilted by Molly Kohler.  The dimensional flowers were charming. 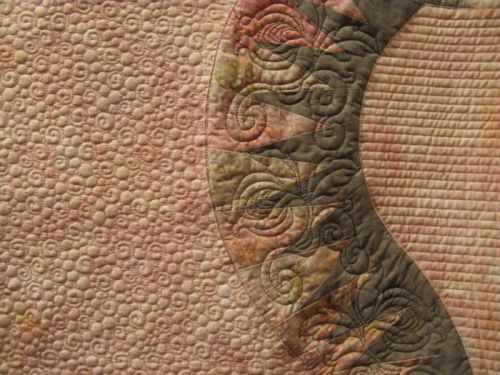 I snapped this one without noting who made or quilted it–it’s really beautiful and detailed. 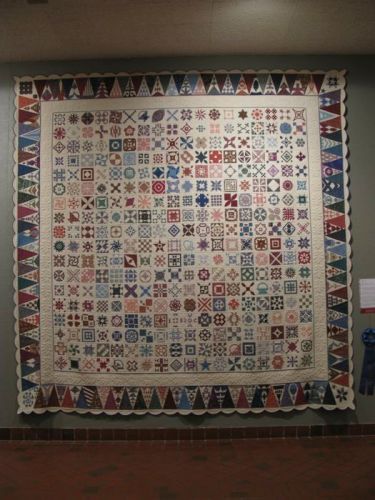 “Look, honey,” I said to my husband.  “A Dear Jane quilt!”  “Dear what?” he said.  The title of this one is Dear Jane Invites Hannah for a Dutch Treat, and is made and quilted by Shirley Olsen.  It was a masterpiece and earned an Award of Excellance from the judges.

Marion McClellan’s Bottle Cap Bangles is a fun use of hexagrams and fussy-cut fabric.  She also quilted her piece.

This quilt, Zinnia Basket, was made and quilted by Patti Jacobs, from a Kim Diehl pattern.  Apparently she used to think that quilters were nuts to “spend time doing hand appliqué when you could sew the pieces on with the sewing machine,” but now is a dedicated lover of appliqué.

I really liked the border. 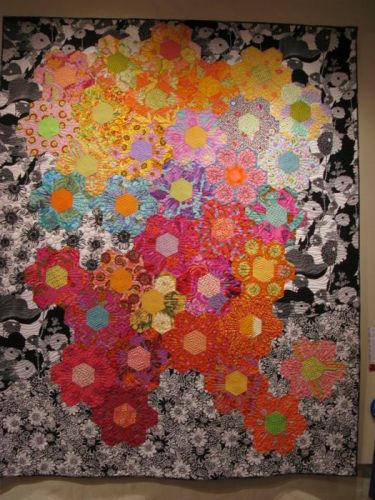 Kaye Evans quilt, Just One Weed, is named for the dandelion hexagon in the middle of the quilt.  It was quilted by Sue McCarty.

The quilt display was merged with a display of giant critters made out of auto body parts, springs, doodads and whatevers. 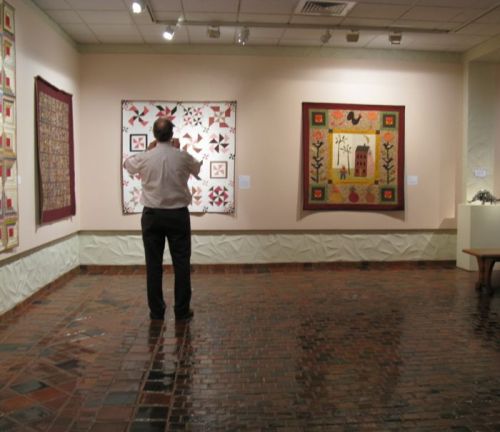 My husband knows just what to do at a quilt show: become like a camera bug and start taking photos.  Many of these photos are his–he’s a delight, but was probably relieved that there was no vendor mall here.

Ladies of the Sea was made by Karin Lee Crawford and quilted by Judy Madsen.  It was a pattern from Sue Garmen depicting famous rigged sailing vessels from around the world.

Detail.  I have to assume that the quilter is really Judi Madsen, of Green Fairy fame, but I could be wrong.  It was gorgeous in both the making and the quilting.

And to finish up this little quilt show, a Log Cabin quilt.  Megan Christensen made the quilt, but didn’t identify the quilter.  The title is A Good Use of Scraps, inspiring us all to get going on our scrap baskets!