Let’s see if I can roll these out for you.  I’m watching the Closing Ceremonies of the Olympics and all this music has me typing quickly.

Karen Eckmeier’s quilt, Aegean Memories, was a masterpiece of tiny pieces, yet it really evoked the Greek Isles, fresh in her memory from a recent visit.  She used collage, paint, machine quilting and couching to make this. 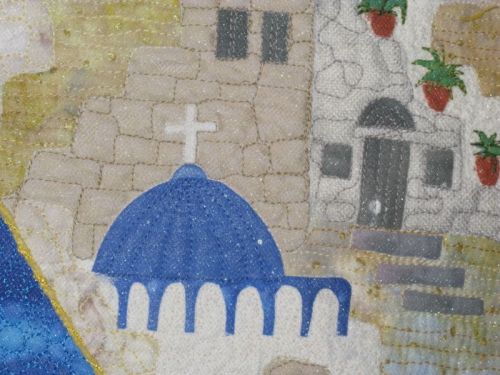 She used the applique-under-tulle netting approach that she did in her other quilt (Black, White, READ).  I think this would be a really good way to control all all those tiny pieces. 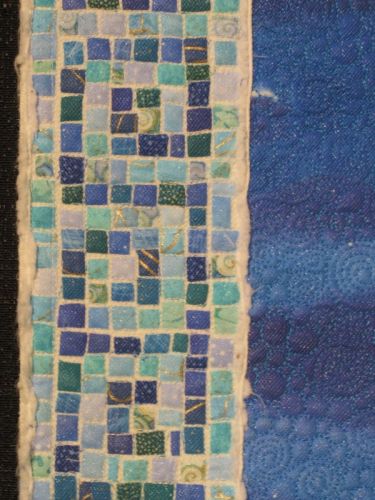 Detail.  Maybe this is where she used the paint?  But no, all those little squares look like scraps of cloth. 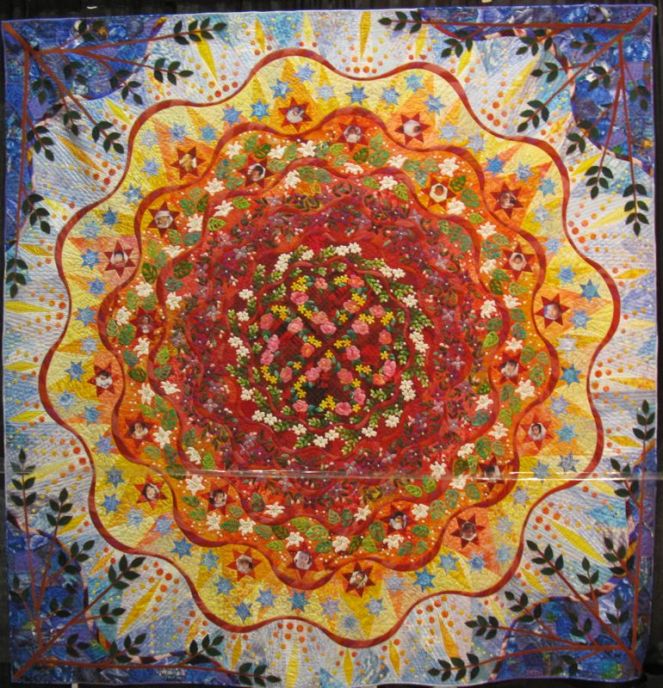 Harumi Asada had her first granddaughter (her son’s daughter) and she made Happy Birthday to commemorate that first year.  There are growth records, pictures of the baby throughout this first year and flowers flowers flowers!  I was happy to get a nine-patch quilt made when my grandchildren were born.  This was really a stunner. 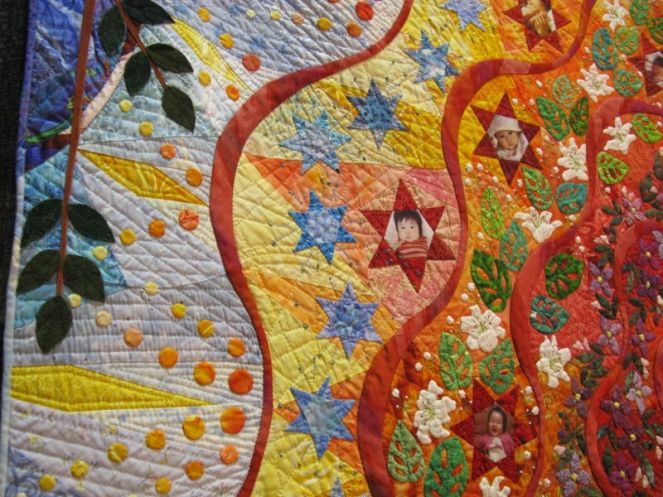 Here you can see a couple of the baby’s photos at different stages of that first year.

All those circles!  My Karen Buckley circle templates would have gotten a workout. I turned off the flash to show the hand quilting, but it does produce a slightly soft focus.

Here’s some of aforementioned flowers.  All hand appliqued. 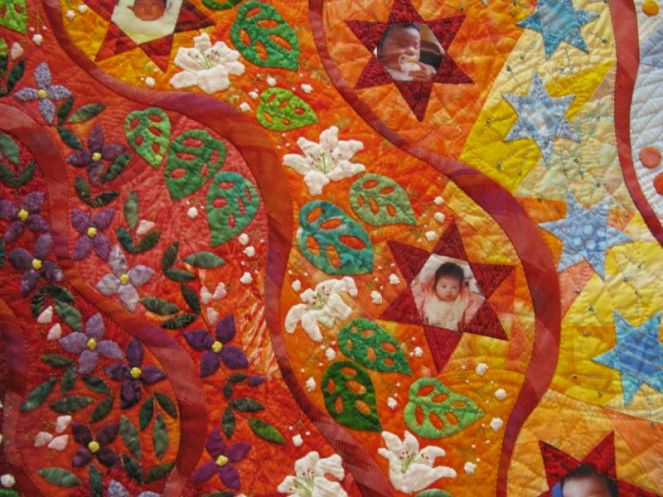 But this wasn’t the only Asada quilt.

In this quilt, Harmony in Nature, she wanted to express that all living things are linked.  She made it for a conference on biodiversity in Nagoya, Japan.

I could have taken billions of photos, but mostly I just stood with my jaw dropped and sighing at her exquisite details.  This is the central medallion of a large quilt — close to a queen size.

Since I spent a year in Washington, DC, I fell in love with this depiction of when cherry trees bloom. The title is Spring Blossoms by Terry Aske.  If you look in the background, you can see a row of trees, as well as the soft carpet of pink blossoms under the tree–so very typical of what the blossoming trees are like.  Aske, however, is from the West Coast of Canada.  I guess cherry blossoms are a universal.

An excellent use of floral fabrics to suggest the individual blossoms.

Here’s another quilt from Terry Aske, titled Spring Beauties.  It’s those stripes that pull me in, as well as the plaid leaves.  Such inventive use of fabric to depict a “local patch of tulips.”

And look at this “border”– outlined, subtly, with the use of the striped fabric again, and the background flowing over into that border area.

Cricket on the Radio, by Elizabeth Bren.

Another Whimsical Garden, by Tina Curran 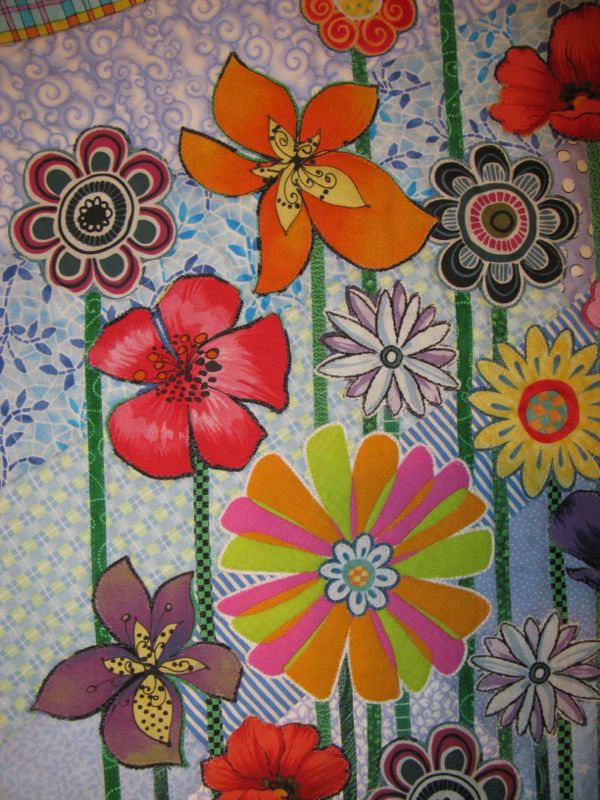 Fused flowers, but they are all different and wonderful. 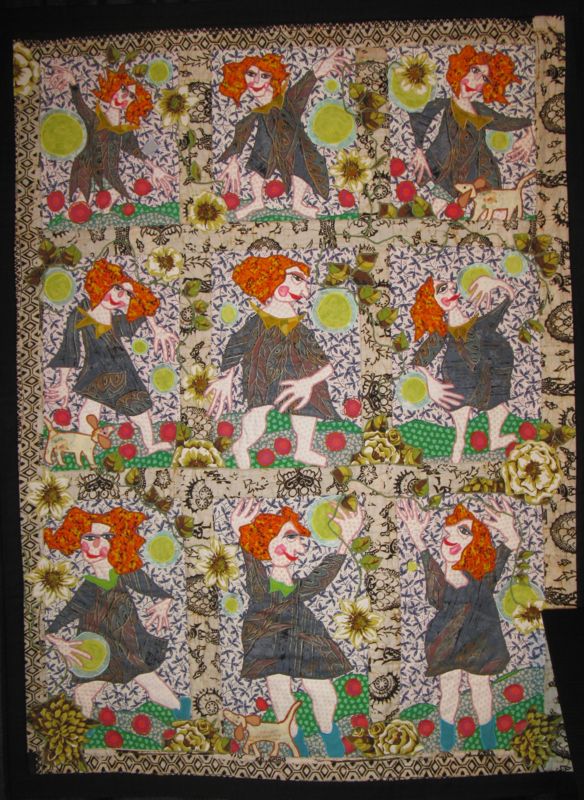 Bodil Gardner must be a favorite of those who put on the show, because I’ve seen her quilts multiple times.  Always interesting, though, with her free-form shapes and almost troll-like faces and bodies. This one’s titled Nine girls a dancing. 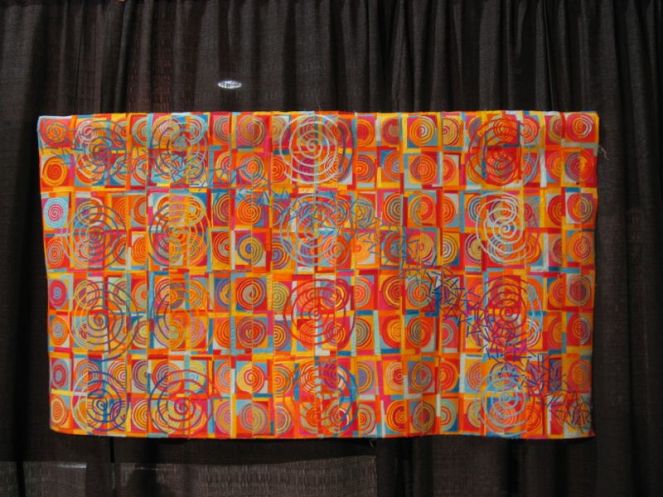 Spiral Fever, detail.  She says she likes to work in a series, and the ideas for the next quilt come to her while working on her current project. 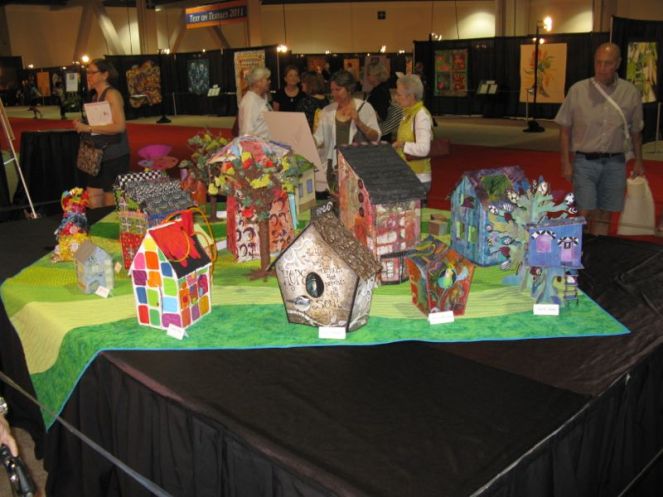 In the center of one of the areas, they had this display of a little village of houses, organized by Kathy York. 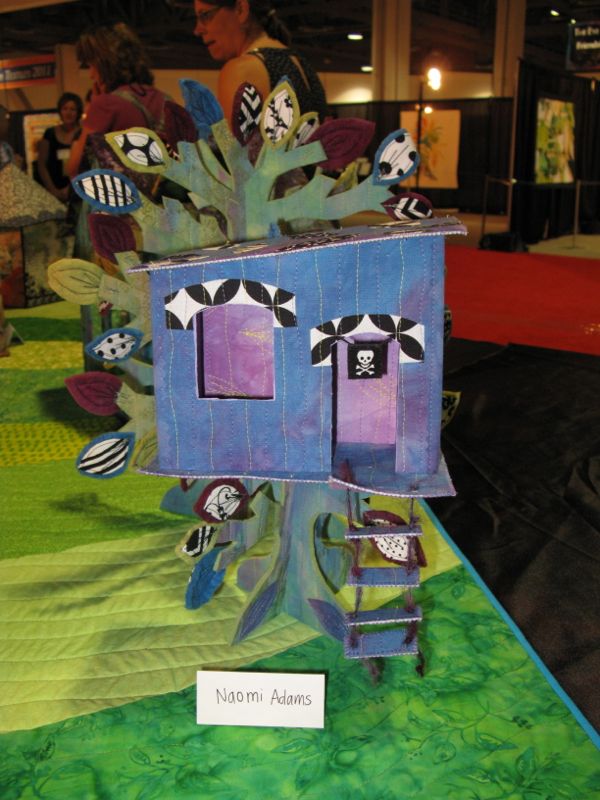 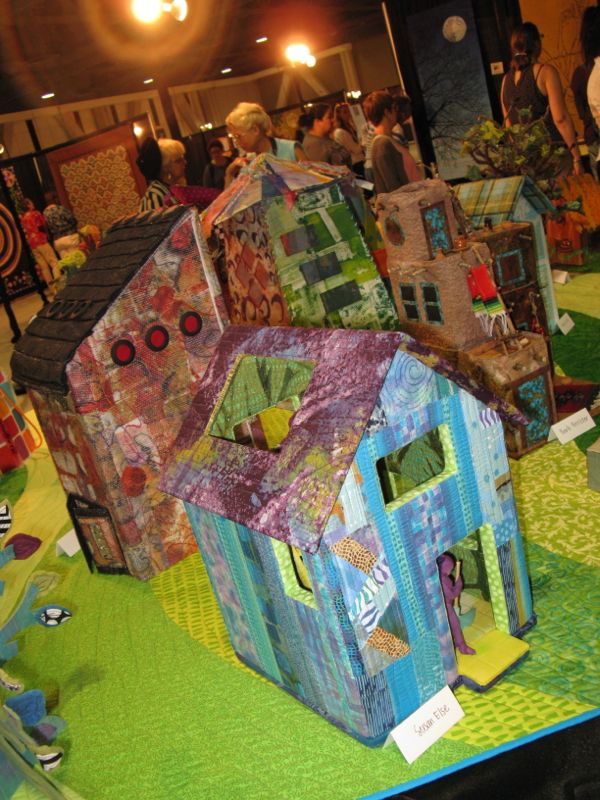 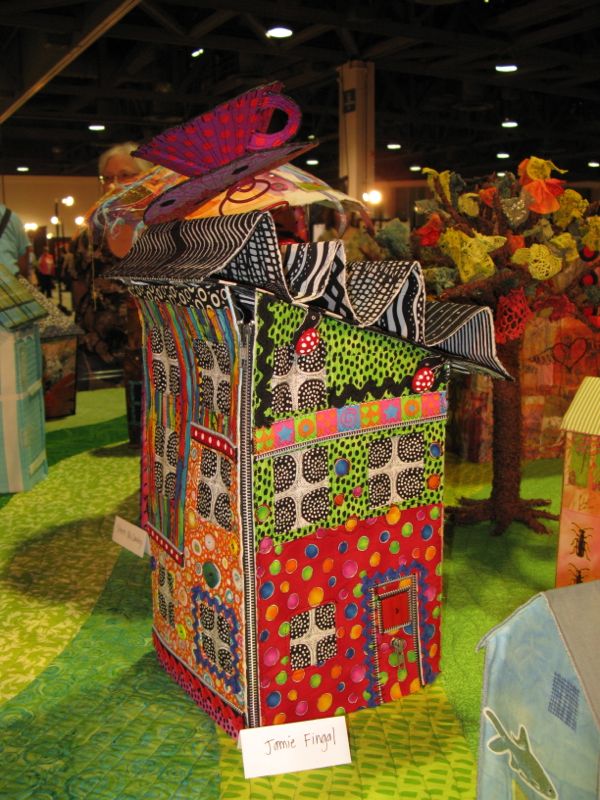 I’m convinced some of these quilt artists never sleep. 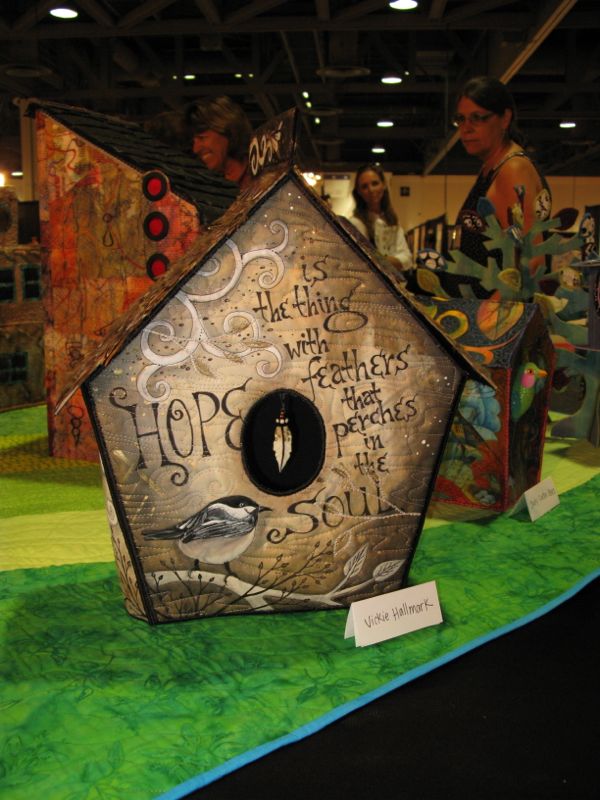 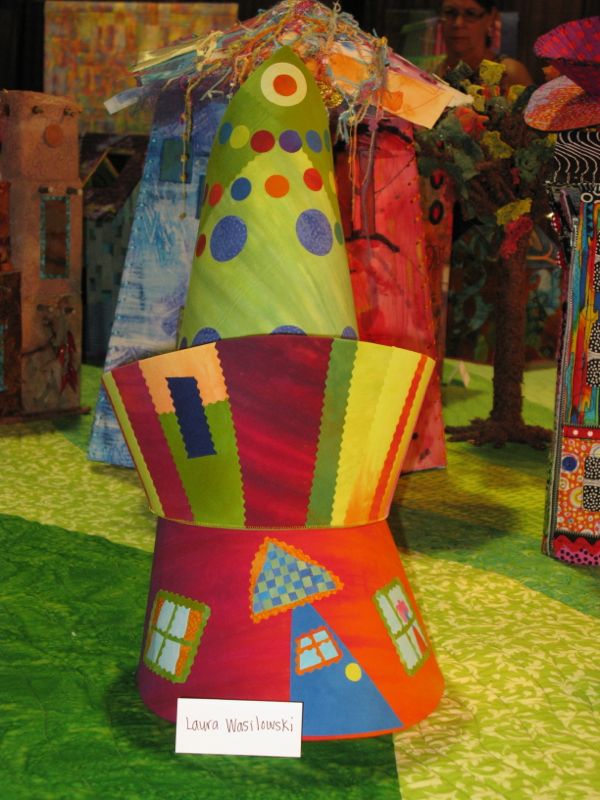 And now it’s time for the Ugly Quilt Award.  Again, this is only my very subjective opinion (and certainly some of mine could qualify.)  To protect the innocent, no names are revealed.

It’s not necessarily the head-on shot that reveals its place as the winner this time.

It’s the side view (and I realize it’s a pretty ugly photo, but again–the lights here are challenging), that shows the 3-D effect of purple pipe cleaners.  I know nothing about the quilt artist and I do have to applaud her inventiveness, but maybe some things just shouldn’t be tried. 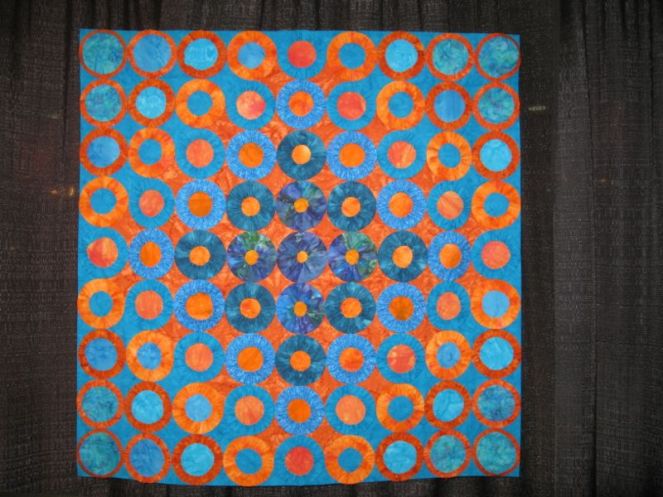 YoYo2: Trip Around the World, by Helen Remick 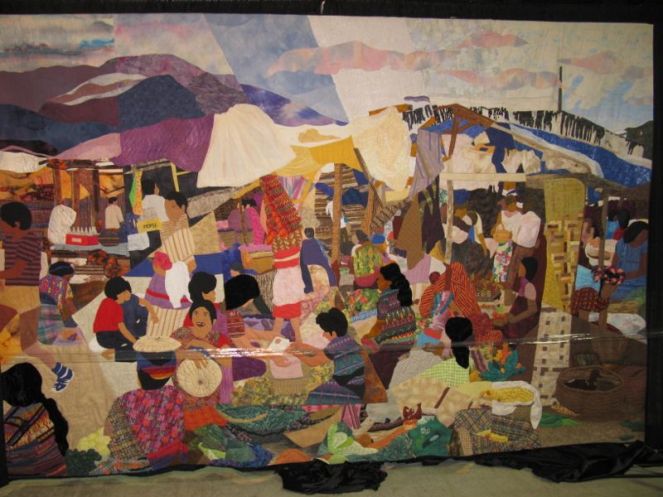 Native Market, by Phyllis Cullen and Annie’s Star Art quilt group members. This is one of those quilts where they take a photograph and cut it into pieces (in this case, twelve) and each member interprets the section s/he has.  I like how they sliced this one into irregular pieces, rather than the usual strips. 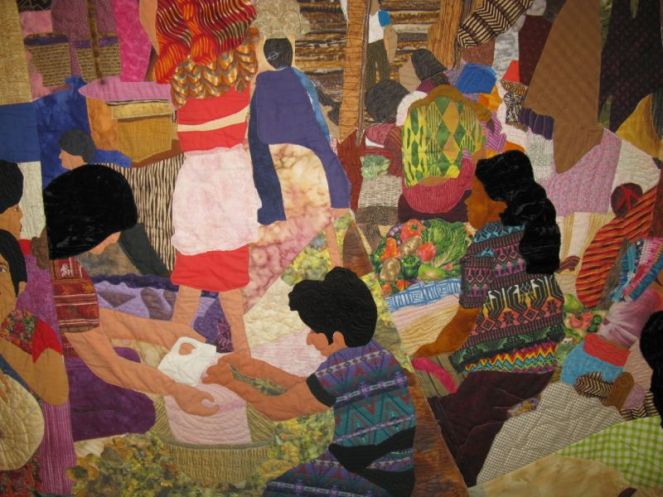 Watt & Shand # 6 is by Sue Reno, who was documenting the conversion of an old department store into a convention center and hotel in Lancaster, Pennsylvania.  These images  are from her own photographs of the reconstruction. 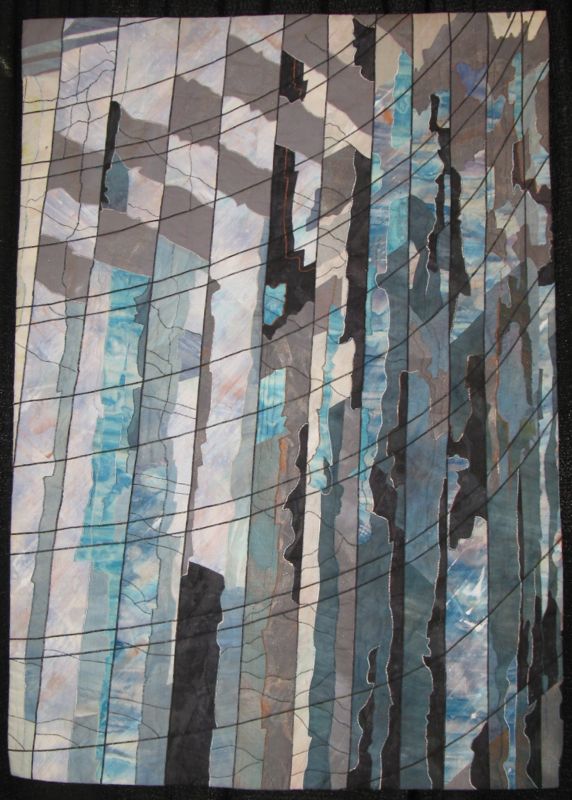 This quilt was in the quilt show booklet, as it is such an interesting quilt.  It is dyed, overdyed, painted, collaged, fused and machine stitched in order to show “the contrast between the patterns in the glass and the structural gridwork” (artist’s statement).  The quilt below is another variation in her series, but I couldn’t find the title in my notes.

This one’s for all the hexie fans out there.  This is the popular rose block that is being constructed by many quilters, using hexagons (or parts of hexagons) in the English Paper Piecing method of construction.  The title of this is Rose Garden and it is made by Ardie Skjod and quilted by Dorothy Burnett.  She used a pattern from an Australian magazine, designed by Dale Ritson. 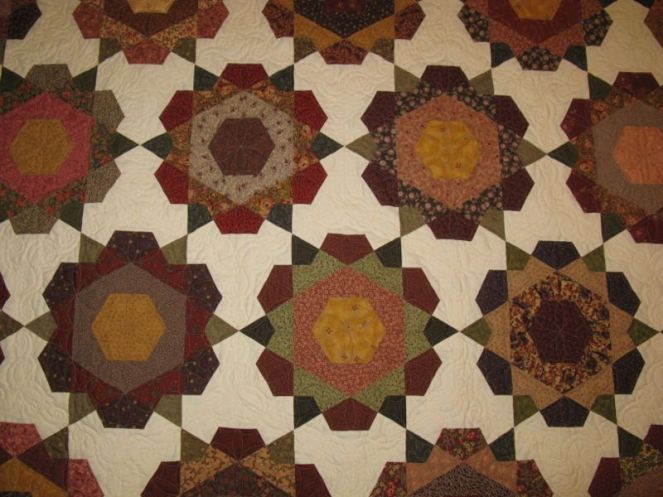 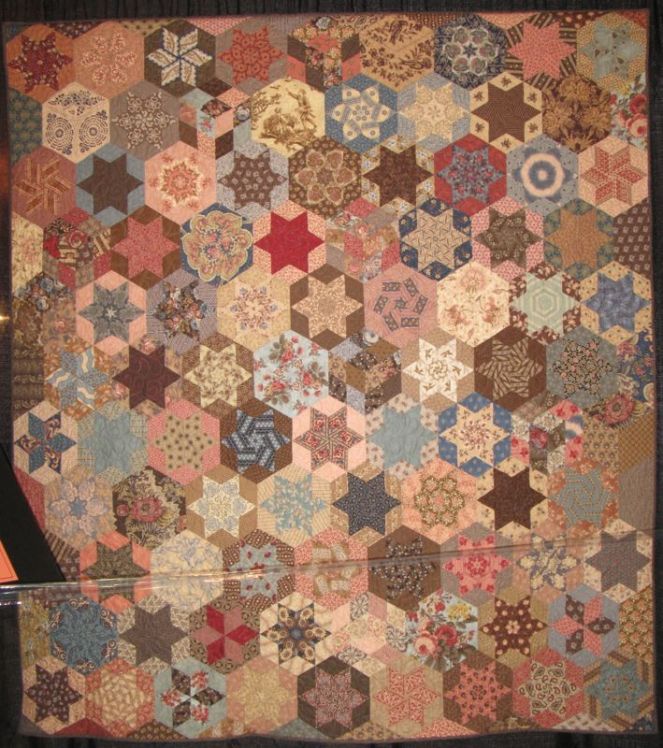 Here’s another one by the same quilter, Ardie Skjod, but this one is quilted by Debbie Blair.  Star Garden is inspired by a photograph she saw in an old magazine, but designed it herself. 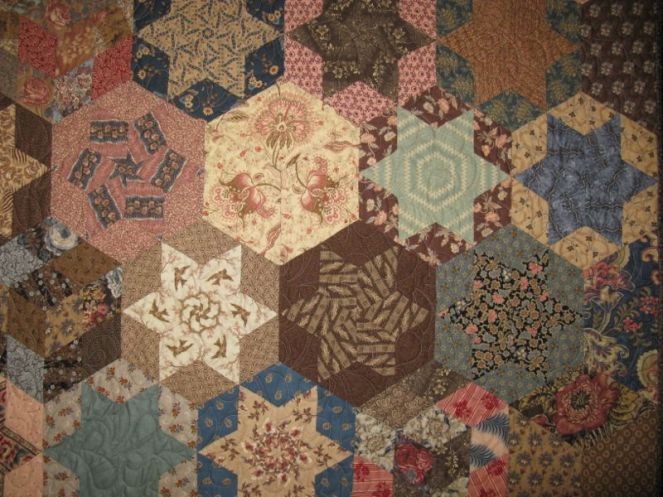 I had to zoom in on that one block, as the use of the stripe really skewed it visually for me, but I think it makes the quilt more interesting.  Some blocks look like Tumbling Blocks and some have those diamond stars, but all of them are a large hexagon.  It didn’t say if this was hand-pieced. 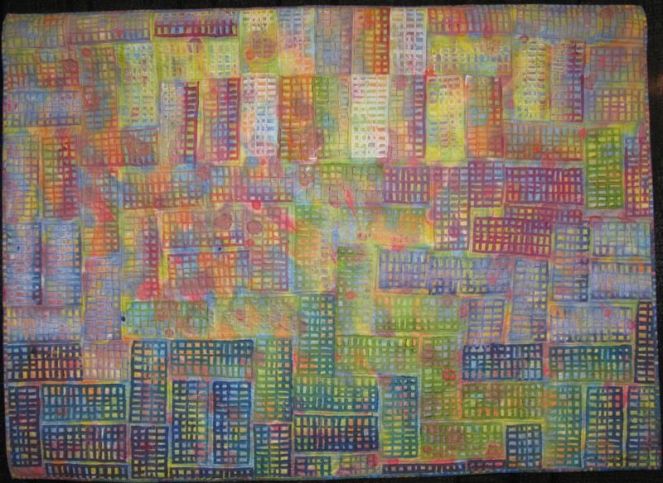 Springtime in the City, by Cynthia St. Charles.  Her city of inspiration? New York City.  This quilt is hand-painted, block printed and machine quilted.  It’s really quite full of beautiful springtime colors.

Portraits of Flora, by Timna Tarr originally started out to be done in taupes and neutrals, but then her “love of color took over.”  The circles are hand appliqued onto a square, and these squares were pieced together to make the quilt. 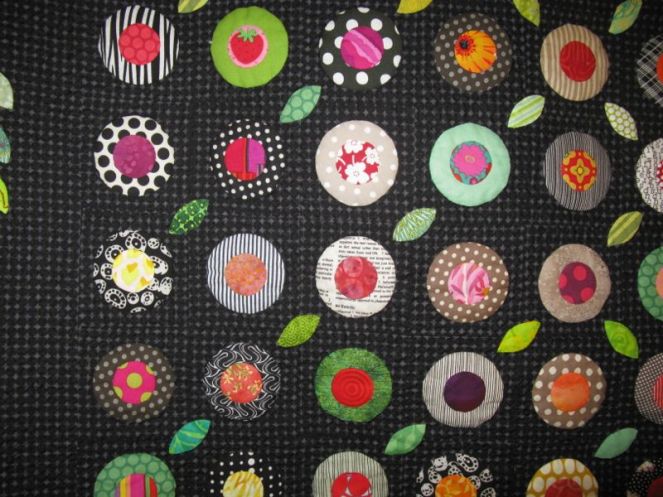 I hope you don’t find these detail shots tedious.  Used to be in the OLD days of blogging, you could click on a photo and it would enlarge, but now I find that lots of blogs limit the size, so a detail shot is needed in order to see what’s going on in the quilt.

Her tight quilting made the circles pop into a bas relief.

Baskets Made With Love, by Connie J. Watkins.

I haven’t figured out yet how these quilts come to be displayed — is there some entry form I don’t know about?  Are these quilts from another show merely transported into the Long Beach festival?  It might be interesting to know as we Southern Californians don’t see a lot of coloration like the browns palette in the quilt above, which speaks to the idea of “importation.”

One more post and then I’m done.  School begins today so I really need to get going on that, but to close, here’s what I finished during the Olympics: