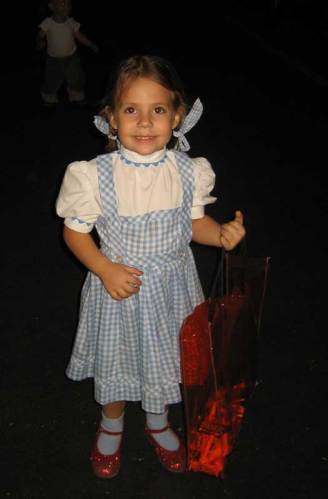 A few years ago, my granddaughter wore this Dorothy blue-gingham dress for trick-or-treating, a gift from her grandmother on the other side of the family (and a hand-me-down from her older sister).  A classic. 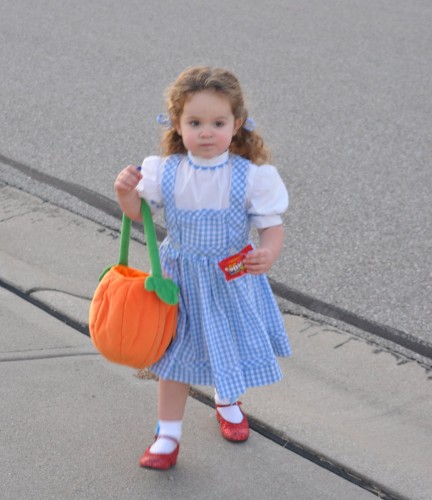 A couple of years later, her younger sister wore it on her trick-or-treating forays, and the youngest granddaughter from that family will probably wear it also in a couple of years.

What is it about this blue gingham dress?  What is it about gingham?  Since I’ve been on an gingham jag, several have left comments that indicate there’s a certain nostalgia for this fabric.  It seems to be associated with childhood, easier times, a dress that had lots of gathers, a dress with a big bow in the back.  Gingham always looks crisp, clean and fresh.  Gingham just has that certain something that reminds of us when we were children, of when staying out until after dark was a delicious treat as we played Hide and Seek, or Red Rover-Red Rover.

Gingham was for dress-up occasions, like Easter Sunday.  There’s an old home movie of three of us sisters all decked out in gingham dresses, with white rickrack along the neckline and armholes.  Mine was pink, Susan’s was blue, Cynthia had a large gingham on in a blue color and Christine, my eldest sister, was apparently too old for gingham as she wore a simple shift.  The quality of the movie was spotty, as home movie cameras were a new thing, the focus flitting as from person to person.  (My parents were just trying to learn this new technology, only they didn’t call it that–it was a great new invention!)  But gingham is ageless, and like Simone, in the earlier posts, when we throw on some gingham it carries with it not only its history (back to England) but also our particular group of memories and associations.

For me, it will always be that pink gingham dress, flounced and tied with a big fat bow at the back, worn on hot summer days.  Or the backing for my second son’s baby quilt–the large blue check a counterpoint to the colorful sashed nine-patches.  Or the flip side of my daughter’s baby quilt, those pink gingham checks making her soft skin glow in those few baby pictures I have of her.

Or perhaps, after this, it will be this summer, with its events and hot days, as I cut and sew new memories with new friends.  Come and sew some gingham with us!