Happy Almost May with Frivol #5!

I’m beginning this post by talking about my ongoing goal to make up all the Mode Frivols tins. As I mentioned before, it’s been a good experience to try something new, to work with fabrics that weren’t generally found on my shelves, and Frivol Tin #5 is just that sort, as its filled with French General.  I’ve used French General before, but it was lighter and airier, when I made a quilt for my sister: 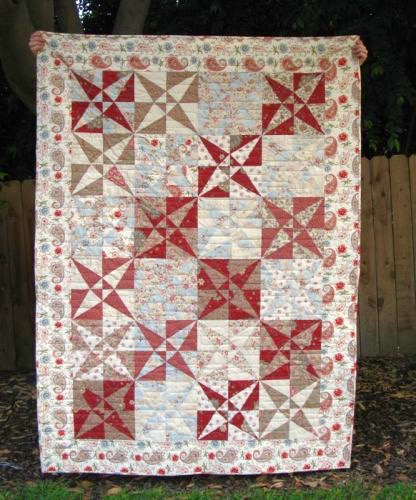 After receiving the quilt, she repainted her room to match.  Now if that’s not undying love from a sister, I don’t know what is.

But this tin is a bit darker, filled with lusciously colored deep reds, for the tin was originally placed in the shops in December, a month when we typically sew with those kinds of colors.

First up, this note from Moda:

You can find more about this tin on their blog (including how they turned it into a tin for hand sewing supplies), but for me, I’m dying to open it:

It will be a table topper, or even a doll quilt as it’s even tinier that what is printed on the tin (see note, above).  However, that means it will sew up quickly.

As I mentioned in last month’s overview, there is always a treat in a tin, and this time it is a beautiful woven ribbon in red and white.

Continuing on, I also received news in my Yahoo mailbox about new ownership of that enterprise, including Flickr.  So went over to Flickr to see what I would lose if I just ignored that whole thing forever.  The newest activity in any Flickr group was over a year ago.  Most activity was much older than that, which told me that a lot of other quilty peeps have abandoned that site.

My masthead, but I think that “Joined 2009” thing is when I opened a yahoo email account. 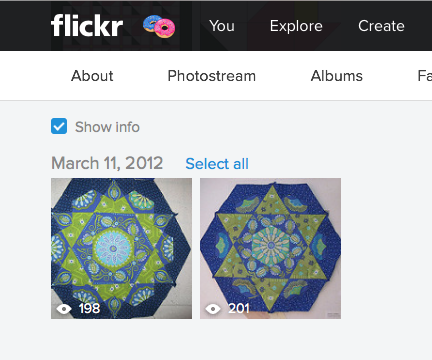 Here’s my first set of photos on the site: March 2012, with my EPP quilt Kaleidoscope.

And my last set, in uploading photos for the Mid-Century Modern Bee, which ended that year.

I used to belong to seven groups on Flickr, most of them Bees, and I also had several Galleries.  I got rid of the Galleries, and unjoined all groups that weren’t a bee I had participated in.  However, I wanted to write about this most popular bee block.

This is called Starry Sky and was originated by Kylie Kelsheimer.  It was originally found online as a download, but I lost track of it.

UPDATE: The links to the original pattern are all gone now–but Kylie now has it up on PayHip.  In figuring out the story through email, apparently she thought it was up on Craftsy, but was unaware of Craftsy’s purge of young designers (I think she had a baby at that time).

Here’s a link to her PayHip version: Starry Sky by Kylie Kelsheimer.  It’s always good to support young quilters; since her pattern is so reasonable and has three sizes, I encourage people to head over there to purchase it.  Kylie has since written me, thanking me for keeping her pattern out there and available.

This one was mine.

So I guess I’m saying that it feels weird to have the history of the quilt world on the internet go missing after such a short time, and it feels equally weird to be erasing some of my own history as well.

It reminds me of some of the things I read in The Gentle Art of Swedish Death Cleaning: How to Free Yourself and Your Family from a Lifetime of Clutter (really, it’s a great little book by Margareta Magnusson): “If someone has lived in a home for many years where children, grown-ups, relatives, and guests have stayed and felt welcome, that same someone is often so busy that they never think of reducing the number of things in the household. And so the number of possessions grows and collects quickly over the years. Suddenly the situation is out of control and the weight of all those things can begin to seem tiring.”

My home and my digital media sites and my blog and Flickr are all like guests that have stayed and felt welcome, I guess.  Unlike the woman in the Swedish Death Cleaning book, not only will we have garages and drawers and closets full that we’ll need to deal with, we’ll also have digital universes that need clearing out, too.  That thought ought to cheer you up, right?

Which leads me, finally, to this a wonderful video about Ken Burns, the historian and documentarian, who sent a lot of his quilts to be exhibited in Nebraska at the International Quilt Study Center and Museum.  If you want to see them, they will only be on exhibit for a couple of more weeks, but the museum does have a good gallery of the quilts online, from which I excerpt these:

My favorite is the American Flag, with all the crosses surrounding it.  So many terrific quilts, and thankfully, someone, some where, did not clean them out and throw them away.  Someone did not think they were household junk to part with.  Thank you, Mr. Burns, for sharing your wonderful collection and thoughts: 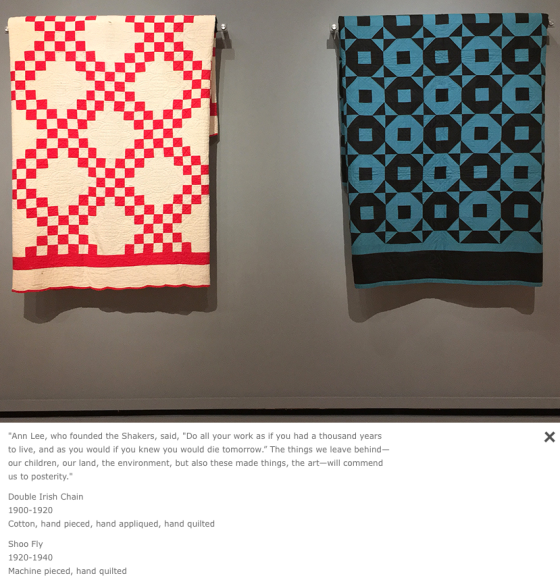 “Ann Lee, who founded the Shakers, said ‘Do all your work as if you had a thousand years to live, and as you would if you knew you would die tomorrow.’  The things we leave behind — our children, our land, the environment, but also these made things, the art — will commend us to posterity.”  ~Ken Burns

18 thoughts on “Quilting as Part of Our Life Story”