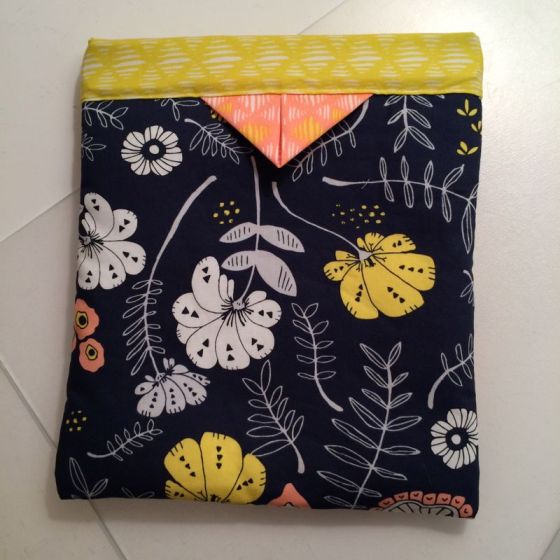 One of the Christmas gifts I gave was a Snap Bag, which uses lengths of metal measuring tape to keep it closed.  I had wanted to try these snap bags forever, so I bought a cheap-o metal tape measure in 3/4″ size (and also one in 1/2″ size) and went to town.  It was really fun.  One tutorial that I looked at was from Wilma’s World.  But I tended to follow was Paulett’s at Sweet P Quilting and Creations, as she had placed batting in hers.

The one that that I found confusing was how to place the measuring tape.  So here it the answer: like this: ) (  with the curvy sides towards each other.  [NOT like this: ( )]

UPDATE: I was referred to the Gourmet Quilter’s video where she places the tape exactly opposite.  Before trying to decide I’d read probably 20 tutorials on the web and watched a couple of videos and had tried to decipher it from that.  Rose Smith has a video where she places it exactly opposite (like I’d done).  However, I like how the one I made fits together, so I give up!  Maybe it doesn’t matter which way you place it.

I put the little tabs there to help pull it open, but really, that measuring tape made it pretty hard to get open, so I just used my fingers.  I wouldn’t use the 3/4″ tape on anything smaller than a finished size of 6″ by 9″ or thereabouts.  Use the narrower 1/2″ tape.  I expected it to be hard to cut with my old scissors from the kitchen drawer, but really it cuts easily, so I don’t think you need tin snips or anything heavy duty.  DO use the tape on the ends (I used duct tape) to protect it from poking through. 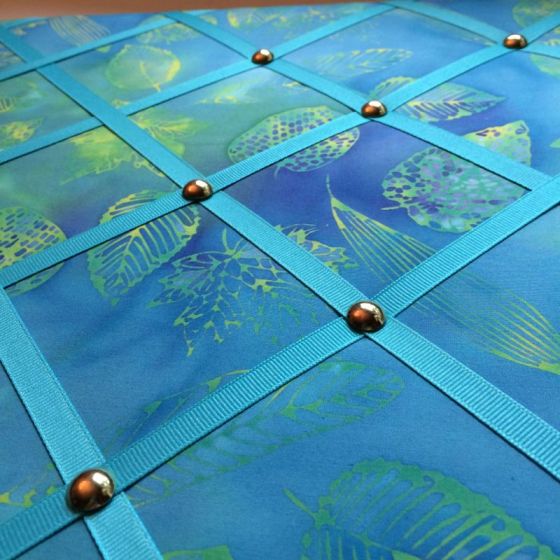 This past summer my husband and I did some traveling to Croatia and we picked up a ton of postcards from the Naive Art Museum in Zagreb, Slovenia.  He kept talking about trying to find a way to display them, so for Christmas I made him this bulletin board.

I went to my local hardware store and asked for “acoustic ceiling tiles,” when come as a unit of two.  I cut it in half so I’d have two squares.  How did I cut them?  The man who helped me recommended a steak knife with serrated edges, but I found a linoleum blade on our work bench (it’s kind of like a Pirate’s Chest out there–you’ll never know what treasures you’ll find) and made that work.  After cutting I sanded the edges to smooth out any bumps from the cutting, then hid one behind the laundry room shelves in case I needed to make him another (in case he didn’t like the fabric I chose). 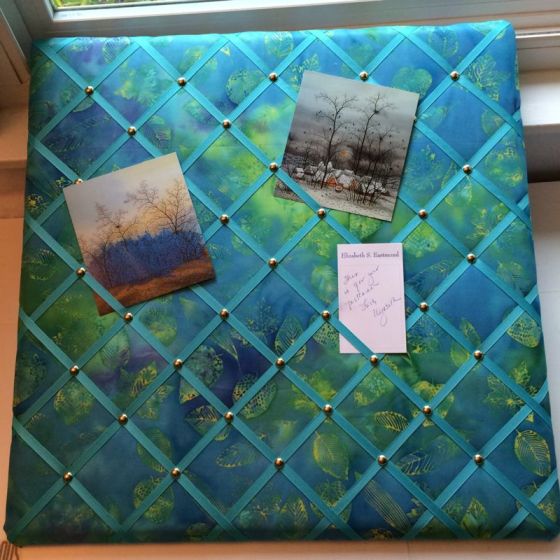 I placed the ceiling tile face down on some batting, then tacked that in four places to keep it on.  My husband’s favorite color is blue, and all the postcards had a bluey color in them (wonder why?) so I chose this muted leaf print.  Really, the limiting factor was the colors of ribbon at JoAnn’s.  You think it wouldn’t be that hard to go and get a couple of spools of ribbon, but those of you who have to shop there know it’s an Eye-Rolling Experience at best.

I had ironed the heck out of my fabric so it was flat flat flat, and then I began the process of stapling it down.  I cut the batting out of the corners, then carefully folded and stapled the fabric down, trying to create the flattest corners I could.

I criss-crossed the ribbons at even intervals, stapling them down as I went.  At the hardware store I had purchased some furniture tacks (or brads) and hammered them in where the ribbons crossed.  On Christmas morning, I don’t think he was all that crazy about the color/fabric choices I’d made, so I showed him the extra and said when he decided what he really wanted, I’d make him another one.  Within a week, he’d propped this up against the wall in his study, the postcards artfully arranged (better than I’d done, above).  Within another week, it was propped up on his chest of drawers in our bathroom, where I thought it might go.  He and I talk about it often, so I’m guessing it’s a keeper! 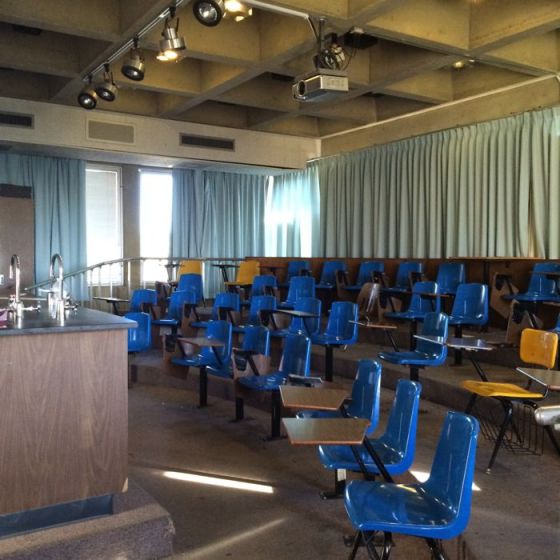 For those of you who are following the saga of my classroom, here is the new one.  It’s dimmer than this photo shows, and is complete with a “stage” where I stand and blather on about Critical Thinking.  It’s a step up from the old one, but still not as great as a regular classroom.  And I had NINE students add on Wednesday.  Nine.  Where were all these students when everyone was registering before the semester started? 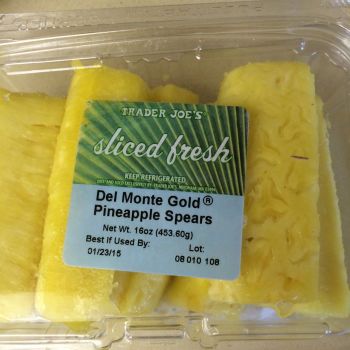 After Brenda commented on eating pineapple spears (last post about my pineapple quilt–I’ve got to get a name for that one), I found myself wandering the aisles of Trader Joe’s, looking for pineapple spears.  Now if it would only help me finish that quilt.

I’m going to QuiltCon in a month (a MONTH!!) and I’d read about people and their buttons.  So I worked up this incredibly ornate design with my magnificent Photoshop skills (*cough*) and sent it off to WackyButtons.com to make me some cute little one-inch buttons to trade.  When I get them, I’ll figure out some giveaway so you can win one.  In the meantime, I’m finishing up my next Circles Block post (which will be early) and hoping to finish up my still-to-be-started Four-in-Art quilt, although I do have a sketch.  That’s progress!