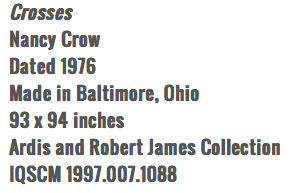 In the book I just finished reading, Steal Like An Artist by Austin Kleon, he writes that “Nothing is original.”  He quotes Jonathan Lethem who notes that “when people call something ‘original,’ nine out of ten times they just don’t know the references or the original sources involved.”  And in our quilt world, I see this all the time manifest in the copyright squabbles, the this-is-my-original-pattern-syndrome and it’s only a variation of a log cabin, the insistence by some in the modern quilt movement that they dreamed it all up — this modernist stuff, without any regard for where the idea first surfaced. . . and then resurfaced.  When I see this stunning quilt by Nancy Crow, made when many young quilters’ parents had not even started dating, I think, as did Kleon when he quoted the Bible, “There is nothing new under the sun.”

But Kleon goes on to say that this idea fills him with hope, rather than despair:  “As the French writer Andre Gide put it, ‘Everything that needs to be said has already been said.  But since no one was listening, everything must be said again.”  Kleon encourages us to note where our influences come from.  I say, if you don’t know about some of the earlier quilters, try heading to the International Quilt Study Center and Museum and browse for a while.  Take a look at these early masters and be inspired. 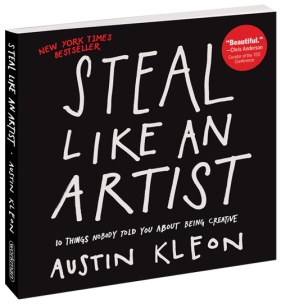 To inspire you, I’m giving away a copy of Austin Kleon’s book, a small little treasure, perfect for some end-of-summer reading.  To win a copy, leave me a comment below and include a source of inspiration, whether it be another quilter, a photograph, an image, nature or something else–something or someone that provokes or triggers your spark of creativity.  Rather than just saying “nature,”  or “Michael James,” try to be specific, such as “the moment the sun drops to the horizon” or “Michael James’ ‘Aurora’ in his early work”  so that we can learn from each other.

I’ll announce the winner on my next post, and send you a gift card from Amazon so you can order it yourself; for this reason, it will work for international as well as domestic. Have fun, everyone!  This post will close on Saturday morning.

My blogging software runs ads on this blog so I can blog for free.  I do not control the content, nor do I endorse these ads.