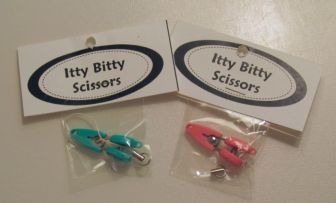 {NOTE: If you are looking for the teensy scissor giveaway, you can find it *here.*}

If you’ve never traveled to New York City, the question of whether that city is worth all the hype may cross your mind.  I can’t answer that one, but  from a quilting perspective, the stimulus provided by this “town,” as the cabbie called it one time, gives me a chance to look at things in a different way.  I’ve had the unique opportunity to travel there three times in the past year and half and have come at the city as a tourist, not as a resident, so can’t answer whether it would be lovely to be there 24/7. Is my experience so different from any travel, anywhere? Don’t know that, but here are three things that punched my creative buttons this past week (along with some quotes on creativity).

“Creativity now is as important in education as literacy, and we should treat it with the same status.” –Ken Robinson

Five Pointz, Queens, New York–scheduled to be demolished in September of this year (2013), so hurry if you want to see it

Take the 7 train from Grand Central towards Queens, and as you round the curve, the elevated track passes an old factory, completed decorated with street art.  Yep, like you, I don’t really want this on MY house, but here in its urban setting, it was amazing.

On Memorial Day when we were there, the area was deserted and quiet, with only a few tourists like ourselves strolling around, cameras clicking away.  I put quite a few of these up on my Instagram feed and within hours, the street artists were identifying each other’s work, noting for me who created these and in some cases, which country they were from.  The taggers (but most of these weren’t really tags, but full-fledged art) have to get permission to put their art up here, and I felt like I was interacting with a community as tightly-knit as our quilting community. 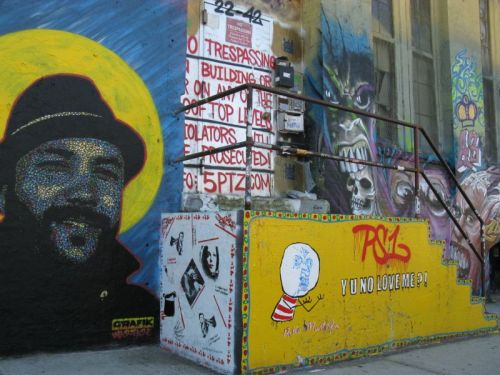 I liked also how people interacted with the art.  This family was from France.

This young woman was there with three of her friends (can you see her in the middle?), and they did yoga poses in front of several pieces.  We talked to one set of spray paint artists (the best paint is apparently purchased from art stores–no Home Depot for them) as they worked, and they said this building could look completely different next week, as it continually being painted over.  There is one man who kind of runs the place, and to be able to paint here, new artists have to work their way up from scraping and cleaning the site, in order to adorn a wall with their creation.

As quilters, we have quilt shows, blogs, and places to show our art.  And while the street art at 5Pointz may not be your thing, I thought it was interesting how this community had evolved in this particular place and time.  I hate the blight of graffiti on my town, the tags scrawled across buildings, defacing them.  But I loved coming here. My takeaways: passion for your art, dedication to completion, ability to put it out there and let it go, colors, shapes, novelty.

“You were probably steered benignly away from things at school when you were a kid — things you liked — on the grounds that you would never get a job doing that: ‘Don’t do music, you’re not going to be a musician. Don’t do art, you won’t be an artist.’ Benign advice — now, profoundly mistaken.” –Ken Robinson

El Anatsui–exhibit at the Brooklyn Museum  (click on this link and watch the video of them putting up the pieces–reminds me of hanging a quilt show.  Sort of)

El Anatsui is a Ghanian artist working in Nigeria and is a master at using materials at hand to create his art.  These squares are all bottle tops, bent and shaped and then put together to create massive “quilts” of color and form and shape.  In a video at the exhibition, he used the word “patchwork” to describe his work of creating pieces and put them together.  There are a lot of similarities to what we quilters do, only ours are cloth, not liquor bottle tops. 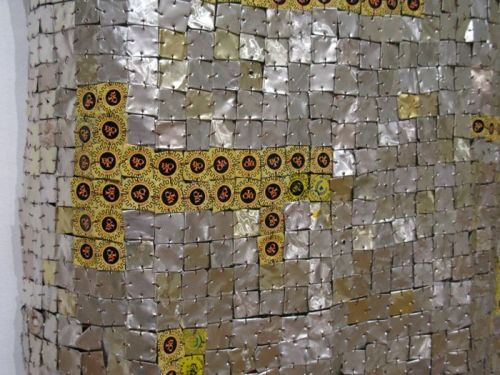 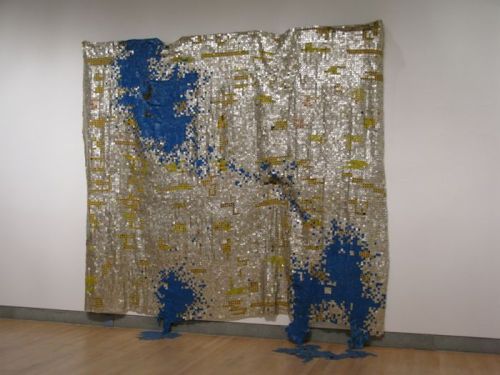 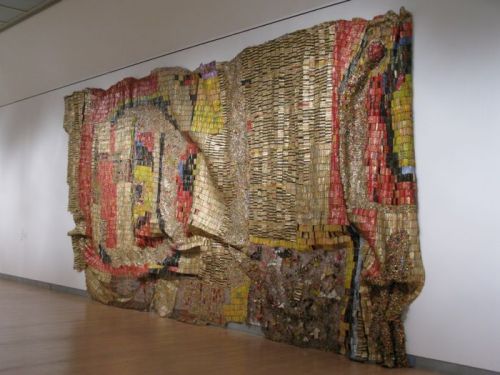 My sister had gone the week before and said it was an amazing exhibit.  Be sure to watch the video on the Brooklyn Museum’s website about how they installed these pieces.  Although they are huge, they look as light as air. Takeaway: explore all kinds of colors, materials, shapes and forms.  Don’t be afraid to reshape or move things around to get a different result.

“Human life is inherently creative. It’s why we all have different résumés. … It’s why human culture is so interesting and diverse and dynamic.” –Ken Robinson

Punk: Chaos to Culture–showing at the Metropolitan Museum of Art

Like the above street art, I am not drawn to punk naturally, but this exhibit at the Met I thought was brilliant, because it talked about the influence of punk fashion on the greater world of fashion–and it brought together some of the things I’d been seeing this week in my touristing. [All photos are from the internet.]  To get a fuller perspective on the show, watch the video, narrated by Andrew Bolton, the curator.

This gallery, titled Bricolage, was where the culmination of recycling trash to treasure was noted, and I loved what what used in the skirt and shirt below:

Bottle Tops!  Couldn’t believe it. They also had dresses that had graffiti sprayed on them, and how graffiti can be incorporated into T-shirt and dresses.  I thought of the current obsession we have with text on cloth, and wondered if we were also feeling a wave of punk influence, in a more refined way.

“If you’re not prepared to be wrong, you’ll never come up with anything original.” –Ken Robinson

I won’t show you any more of that exhibit, as it was punk-ish, after all, better seen in context, as is all art.  But I will leave you with one more picture: 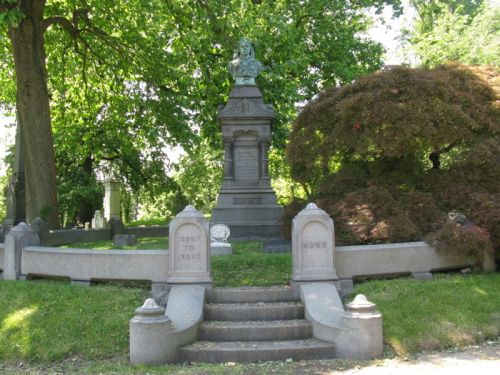 This is the grave of Elias Howe in the Green-Wood Cemetary in Brooklyn (hey–it was Memorial Day, after all), in the who we all owe a great debt, as he was the inventor of the modern sewing machine.  Apparently the biggest sticking point was where the eye of the needle should go, and this account from a family story, tells how he came to invent this (from Wikipedia):

“He almost beggared himself before he discovered where the eye of the needle of the sewing machine should be located. It is probable that there are very few persons who know how it came about. His original idea was to follow the model of the ordinary needle, and have the eye at the heel. It never occurred to him that it should be placed near the point, and he might have failed altogether if he had not dreamed he was building a sewing machine for a savage king in a strange country. Just as in his actual working experience, he was perplexed about the needle’s eye. He thought the king gave him twenty-four hours in which to complete the machine and make it sew. If not finished in that time death was to be the punishment. Howe worked and worked, and puzzled, and finally gave it up. Then he thought he was taken out to be executed. He noticed that the warriors carried spears that were pierced near the head. Instantly came the solution of the difficulty, and while the inventor was begging for time, he awoke. It was 4 o’clock in the morning. He jumped out of bed, ran to his workshop, and by 9, a needle with an eye at the point had been rudely modeled.”

Wikipedia also notes that “Howe received a patent in 1851 for an “Automatic, Continuous Clothing Closure.” Perhaps because of the success of his sewing machine, he did not try to seriously market it, missing recognition he might otherwise have received.”  In other words, he invented the zipper, too.

Sorry for the long post, but sometimes it’s interesting to note where we get “refilled” when we’ve run out of ideas, or are tired, or have too many UFO’s lurking in the closet and have lost our creative mojo. (Plus, we had a great time in The Big Apple.)

Quotes are from Ken Robinson, who has given many TED talks on creativity and our educational system.

9 thoughts on “Punching the Creative Buttons”