How do I make nearly 60 wonky, improv-y hearts and not go crazy? Now there’s a challenge.

I started here, with a rough pattern of how big I wanted my “improv” wonky heart to be. The free PDF file is available for download.  It finishes roughly at 5 1/2″ wide by 7 1/2″ tall. 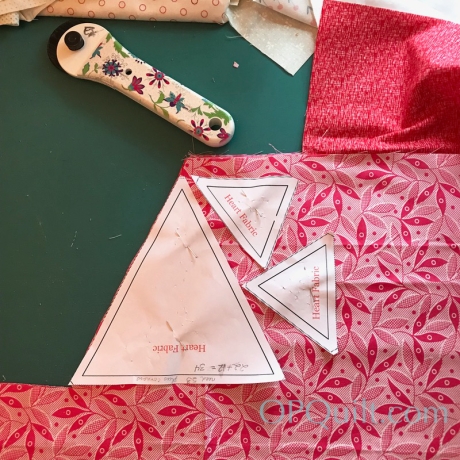 I started with the heart pieces. I layered up seven pieces of different pink and red fabrics, pinned on the heart pieces and placing my ruler along their outer edge, I cut around them with a rotary cutter: it wouldn’t really matter if I was hyper-accurate…close enough would do.  I repeated this nine times.

Then I did the same thing with the background pieces, but was careful with my directional fabrics: I kept the pieces oriented as they would sew into the heart block.

I shuffled the fabrics so no two fabrics would be together, and made a sample heart (at the top of the post). I pinned it next to the quilt of words I’d been working on, closed up the machine, turned off the iron, and enjoyed the sunset: 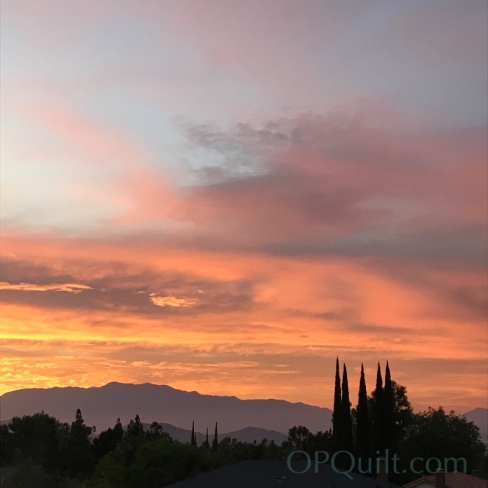 When I woke up in the morning, I decided to try a digital mock-up of the quilt with the hearts as a border, as I wondered if the hearts were too big.  I sent the photo to my two of my quilting buddies and they gave me two thumbs’ up.  I’ll probably try to sneak in a narrow red/pink border between the quilt center and the outer border of hearts.

I’ve become braver about being wonky and improv-like, skewing seams, overlapping, cutting off points, generally going at it easy, instead of pristine.

This is one of two long-term UFOs that haunt me in my dreams.  The other one is Small World, which I keep in parts in a basket in my shelves.  I do have hopes on finishing that one, too.  I signed up for a Jen Kingwell class at Road to California in January; I suppose one goal would be to have it finished so she could sign it?  Right.

In other sewing news, I finished July’s Gridster Bee blocks for my beemate Linda and sent them off.

And I’m trying this new type of tomato, developed for scorching temperatures.  This year we were almost chilly and foggy until June, then the temps shot up high.  I haven’t had good luck with my garden in three years, after a stunning first year of beginner’s luck.  But hope is a thing with feathers, said Emily Dickensen, or my case, tomatoes. 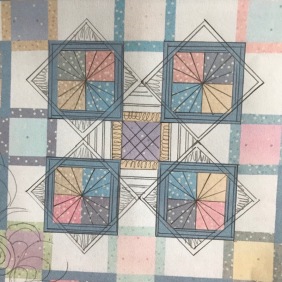 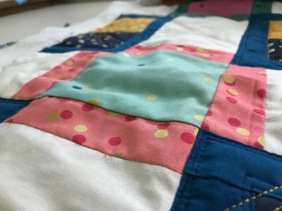 I’ve also started quilting City Streets, a quilt of my own design.

I’d picked up this Magnifico-cousin (same type of thread) when I visited Superior Threads last time.  It’s color 101, and it looks like a gold thread, but isn’t a metallic thread: 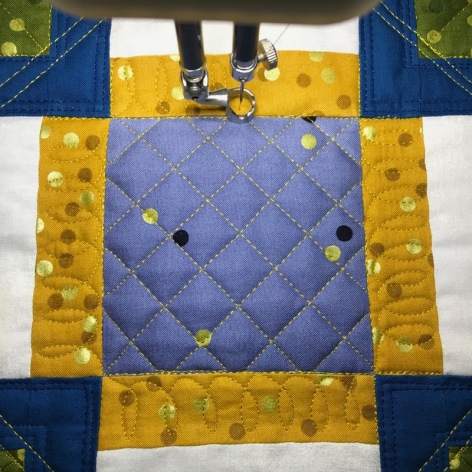 I hope I don’t run out before I finish this quilt.

Finally, in my discussion about how the internet irritated me, I read a ton of blogs, some of which I can’t quite remember.  But I did take a screen shot of this gem, a featured quilter on a truly dedicated quilter’s blog. (Given what he says about his favorite fabric color, I don’t think he would like my gold thread.)  However, I leave you with the hope that you, too, have started quilting several times, as well as the ability to make the quilts in your head.