Made and quilted by Elizabeth Eastmond,
for the Four-in-Art Quilt Group 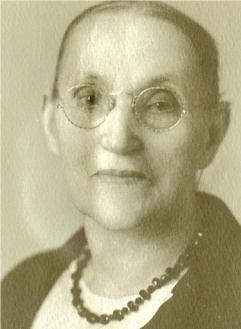 Elizabeth Frances Fellow Critchlow, a lass born in England in 1855, in the county of Staffordshire, surely did love her garden.  She is my great-grandmother and I am named for her.

When Rachel announced the theme of Queen Anne’s lace for our first Four-in-Art quilt, my mind immediately thought of my great-grandmother and her gardens.  I looked up the origin of the name of this flower, and most sources believed it had origins in British royalty references, which reinforced that I’d be working with my English Elizabeth, as I came to think of her.  A dedicated Anglophile, she listened to major speeches by the King on her wireless set, tuning in from her home in the mountains of Utah.  My mother tells me that she loved to garden, and her gardens were renowned, with even the local university coming over to study some of her plants and trees.  Although she lived most of her adult life here in the United States (she arrived here at age eleven), I often wonder if she spoke with a British accent here and there on some words.

I chose to work with this picture, because of her smile–just barely there—but a warm welcoming face.  My mother says she likes this picture, but also remembers her grandmother out in her gardens, her straw hat on her head.

And then I thought back to the most recent wedding in our house, that of my son Peter to his bride Megan, and they chose a rendition of Queen Anne’s lace for their announcements as well.  I love how you don’t “see” a flower, and then suddenly it’s everywhere.

Betty lives in Virginia, and unless you’ve been under a rock this week, you know about Frankenstorm, the combination of weather patterns that spelled disaster, weather-wise, for the East Coast.  Sunday night, before the storm was to hit, Betty emailed me her photos and artist’s statement, just in case her power and internet should go out.  I’m pleased as punch to present to you her Queen Anne’s Lace quilt.

“This Four in Art challenge, our first, was an opportunity for me to stretch – to stop, for a moment, the churn of easy quilts and do something new.  When the theme – Nature:  Queen Anne’s Lace – was revealed, I sighed.  Love the flower, although it isn’t as highly regarded on the east coast as apparently it is on the west coast, but I drew a blank when coming up with a setting.  So, I took a practical approach:  just love the Union Jack and decided to use that as my backdrop.  I planned to paint my flag, but could not get the red and blue faded enough so decided to go the fabric route.  I was excited to use the crown and copying that onto Kona Ash was a first; one of my favorite details in this piece is the silver metallic stitched onto the crown (which did not come through in the photos).    I had hoped to actually stencil the lace to form the flower, but that didn’t work well so I opted for real lace with pearl cotton accents.  The flower is my least favorite feature of this little quilt, but it is holding its head up boldly and doing its part and I am, overall, pleased.

“The backing is, appropriately, a simple flower piece and I loved making the label.  It is bound in simple navy Kona – had tried to overcast the edges with silver metallic, but that did not work well.

“This was fun and without boundaries (except for the size) and provided we do it again, I will find other new methods to try and apply!”

Here are some more photos: 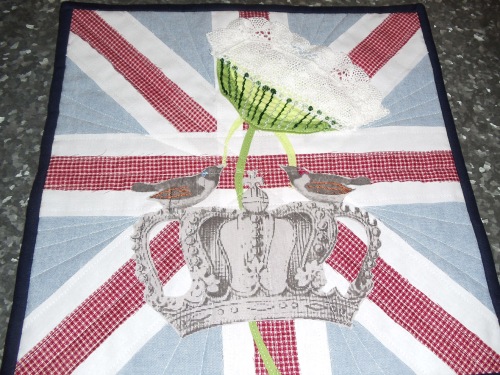 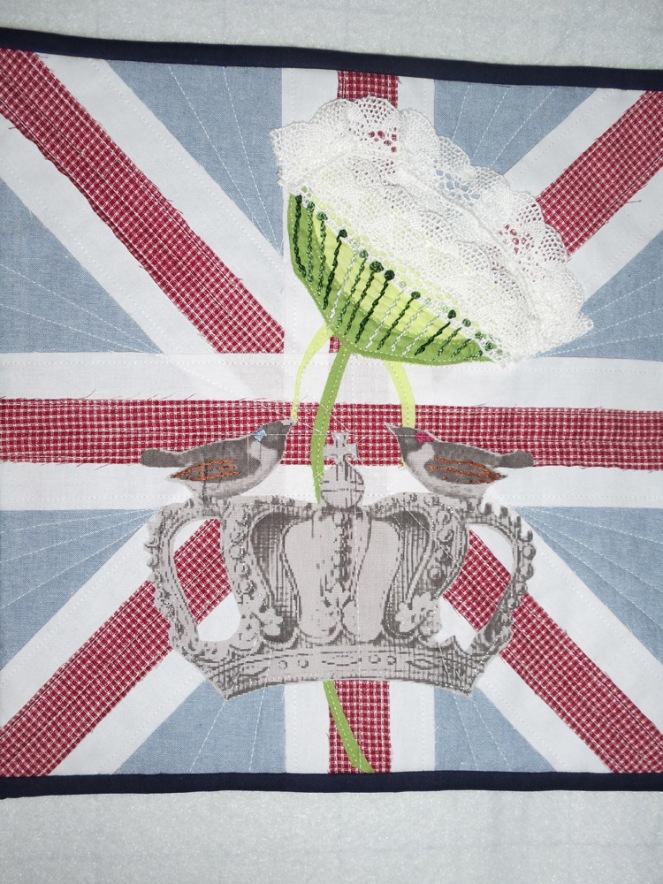 Label from Betty’s quilt. We hope that all will be okay on the East Coast soon.  Betty usually publishes on Flickr.

Check out Leanne, of She Can Quilt, and Rachel of The Life of Riley to see their Four-In-Art Quilts.

And tomorrow, a new theme is revealed!