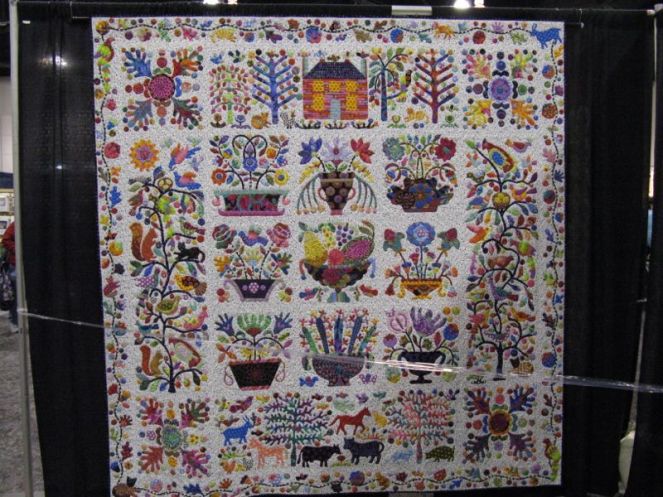 To start off this post, I thought the Baltimores would be a good thing, and since we already know from past posts that the person that hangs this show groups everything in a clump (Hello?  Have you heard about habituation?) it’s easy to find them. Oh, yes.  I get that I’m doing habituation too.  (Life’s little irony.)

The Bizzy Bird Farm is made and quilted by Julie Prose of Ottumwa, Iowa.  She writes that she did a lot of fussy cutting from Kaffe Fassett fabrics.  It’s a variation of  Kim McLean Roseville Album pattern, but Prose notes that she changed the borders.  Sorry about the mediocre picture–those shiny lines are the plastic tape they use to keep up from the quilts.

Detail.  I love the background fabric she used. 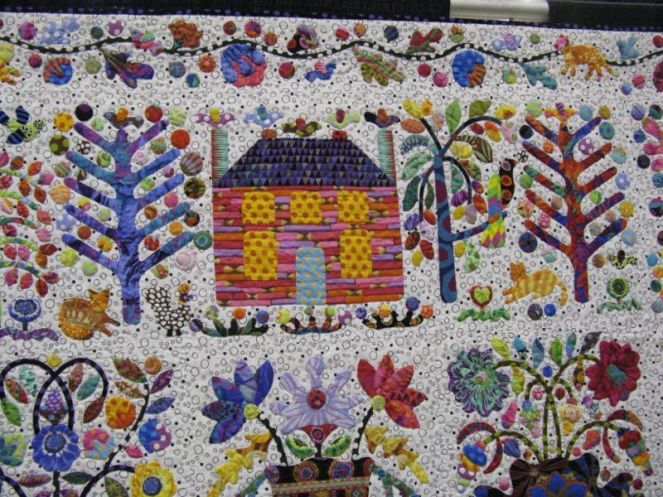 I’m a fan of the “pencil” fabric from Kaffe Fassett, used here for the logs in her log cabin. 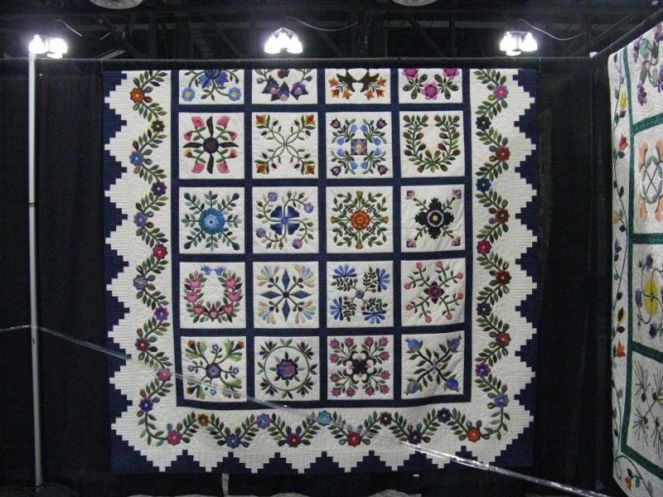 Several members of the  Shadow Mountain Quilters, a guild from Pahrump Nevada, got together to made this quilt, titled American Tradition. While it looks like the borders are a free-floating zig-zag, the quilt is actually rectangle, with deep navy blue edging on the outside of the white vine border.  It was a beautiful quilt. 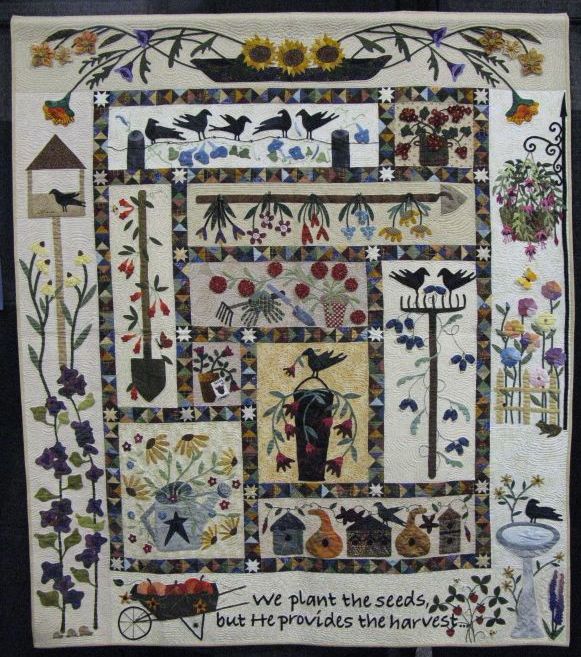 A little less traditional Baltimore Album quilt is this one, titled Our Garden, His and Mine.  It’s made by Judith Ledford, of Oceanside, California and quilted by Shawn York of Elfin Forest, California.  It took her nearly thirteen months, working every day to complete this. 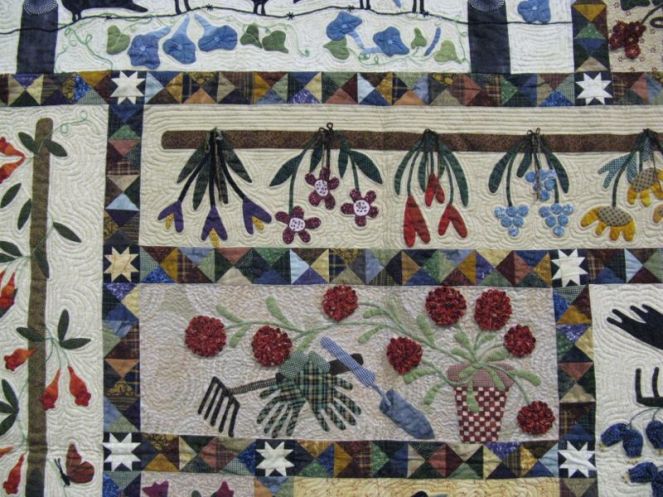 Detail, showing the garden rake, trowel and plaid gloves by a pot of blooming red flowers.  I also love those blue morning glories, dangling down near her pieced triangle sashing. 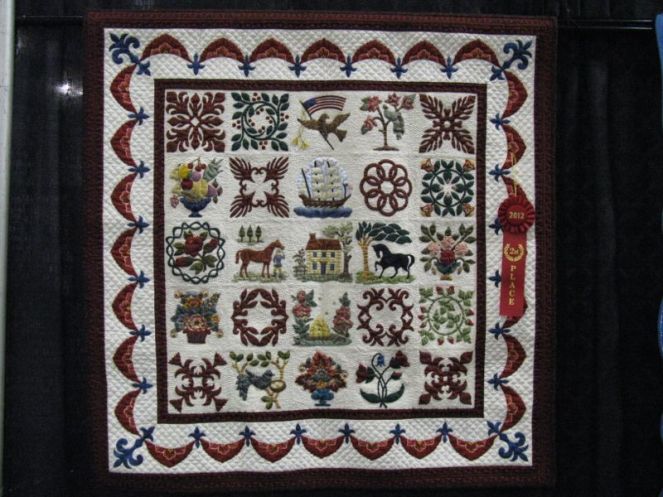 Susie Wimer of Ranson, West Viriginia didn’t want to make a quilt like everyone else’s, so she went miniature in Mon Petit Baltimore.  She began by making one small block, then another, and another, using fabric left from other projects.  She used themes from antique albums and other 19th century genres.  She writes “For the cutouts, I just put scissors to paper and experimented.” 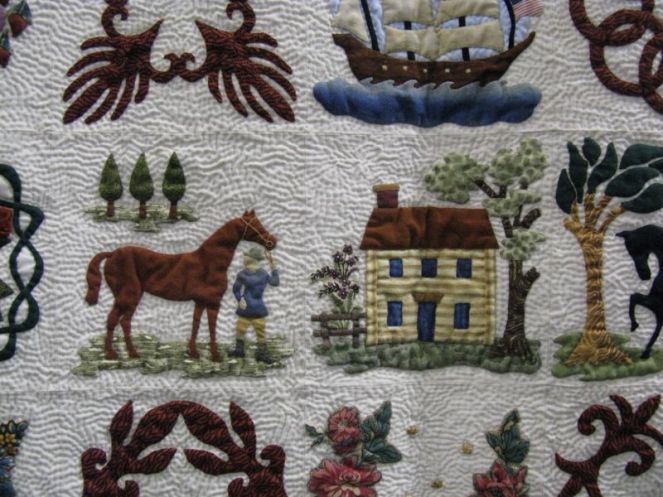 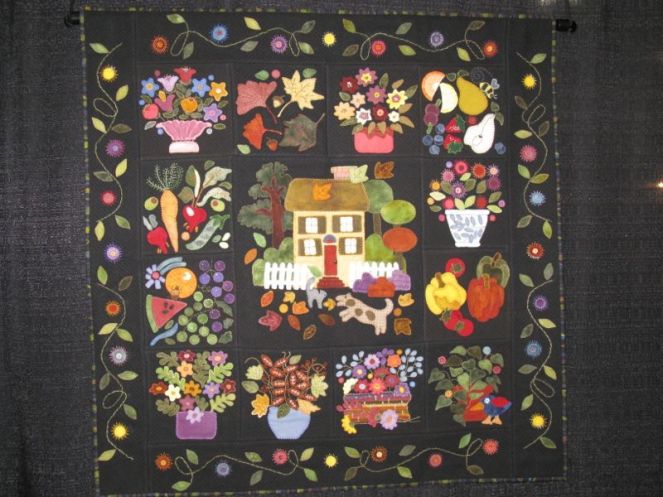 I think this is a type of Baltimore, although it doesn’t have the traditional white background.  Instead, Denise Nelms of Irvine California, chose to work her magic using wool instead of cottons on a black background. 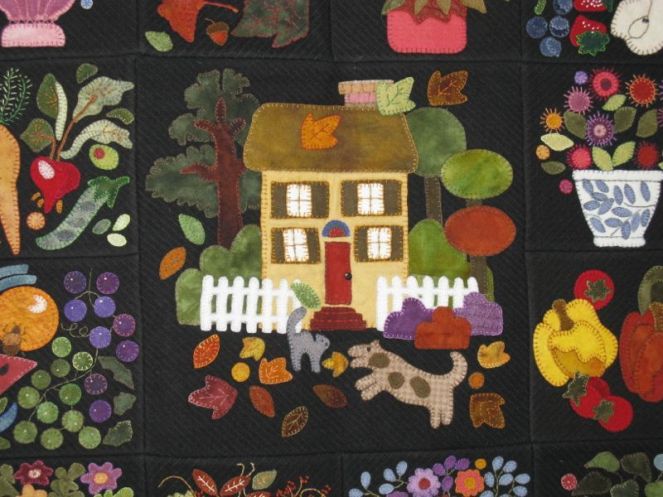 The title of this beauty is Home and Harvest.  When you look closely, you can see the blanket stitches around each piece.  This is her second quilt using wool. 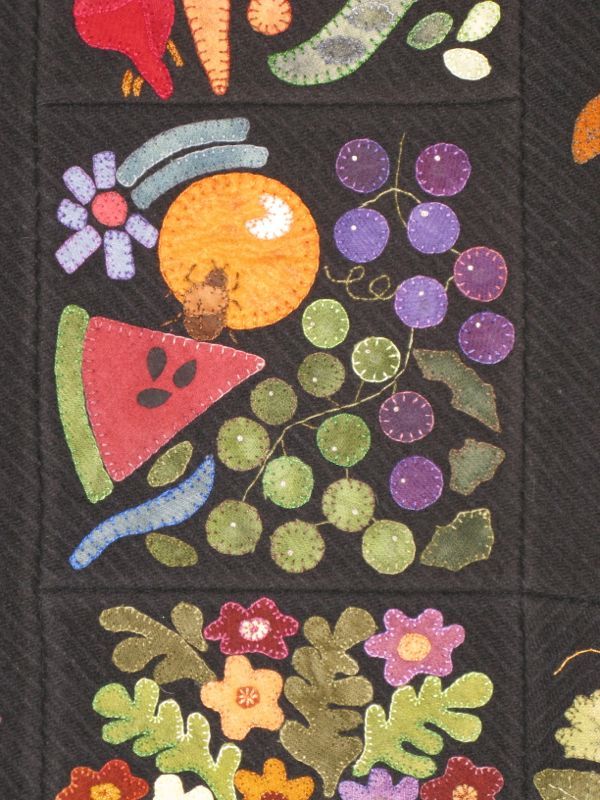 I took about three pictures of this block, trying to replicate the rich black background and the vibrant colors, but the massive overhead lights distorts everything.  You just have to know it was beautiful.

Mary Kay Davis’ quilt, A Sprinkling of Stardust, was made for a McCall’s quilting challenge and uses only two blocks: Delectable Mountains and Lone Star.  It positively glowed. 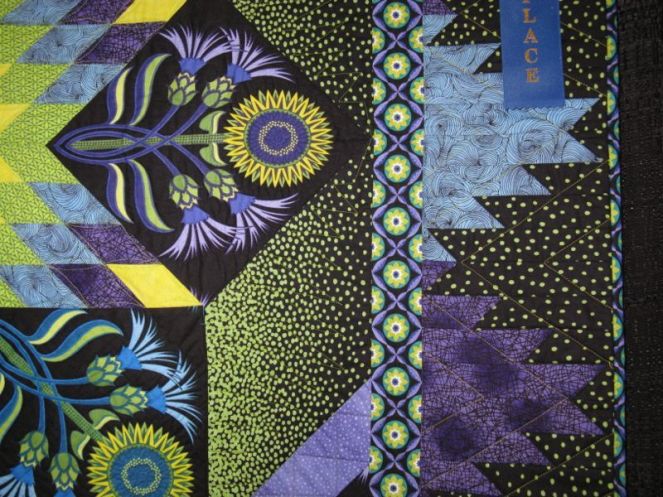 She made good use of Jane Sassaman fabrics. 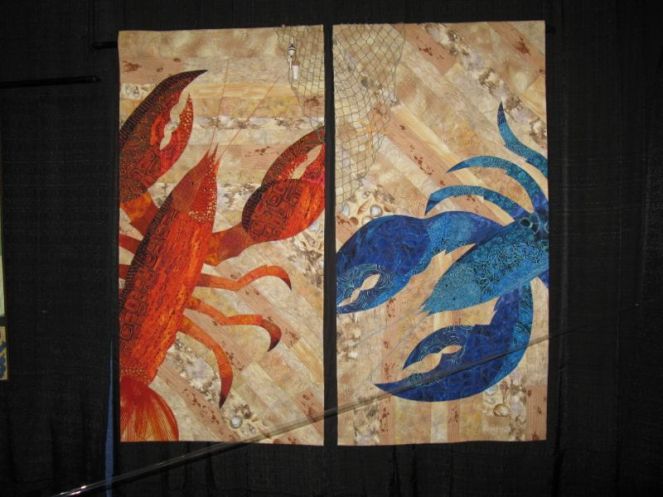 Rare Catch is made and quilted by Diane Steffan of Lake Ozark, Missori.  She writes: “Blue lobsters are very rare genetic anomalies, a one in five million occurrence.”  This is both machine pieced and quilted. 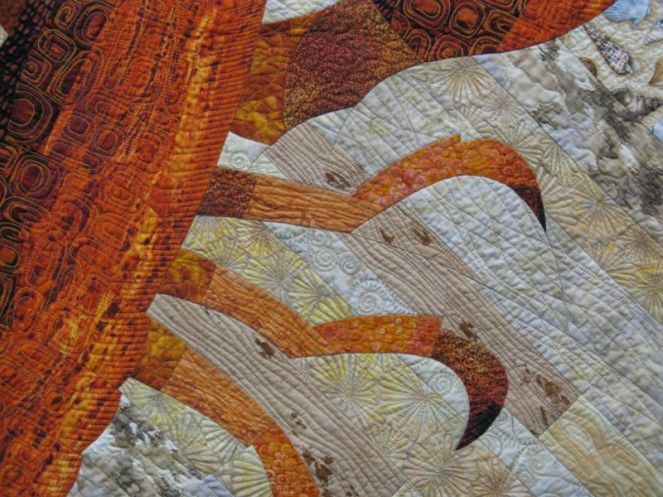 I snapped a close-up to see the interesting variety of stitches used in the quilting.  These quilts, a pair, were some of my favorites. 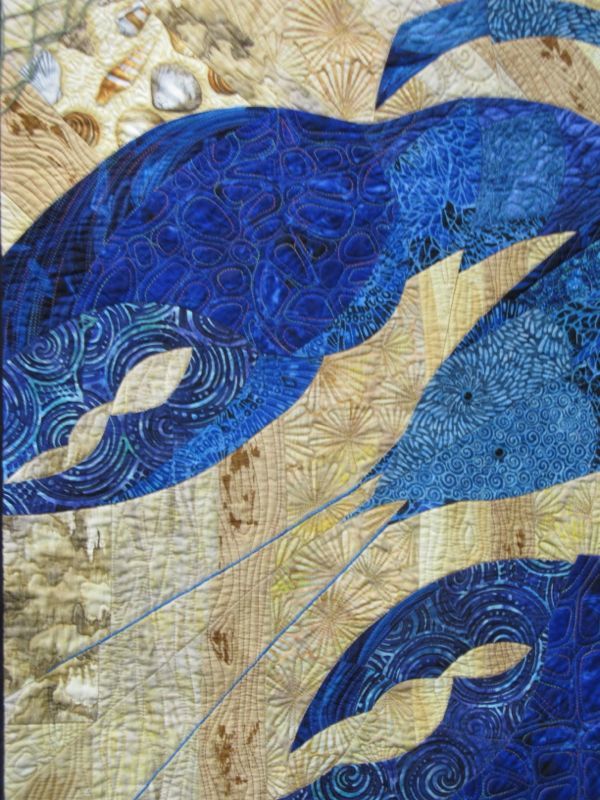 Such a good use of fabric and quilting.  And because I am not a judge, I may not know what I’m talking about but to me a good quilt makes good use of both the medium and the way its used.  This quilt qualifies. 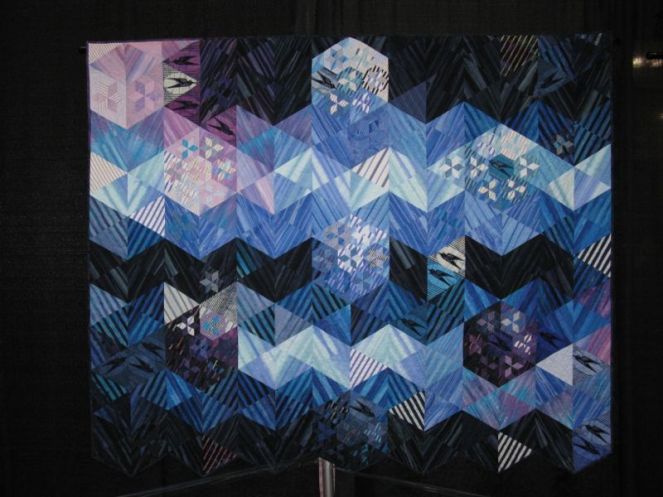 Ann B. Feitelson depicted the Ice on the Sawmill River with her pieced quilt.  This was another little gem of a quilt, tucked away without fanfare or ribbons that was beautifully executed.  She used different colors to represent snow, ice and water, and over-dyed African fabrics (the birds) to represent “what remains animated despite frigid temperatures.” 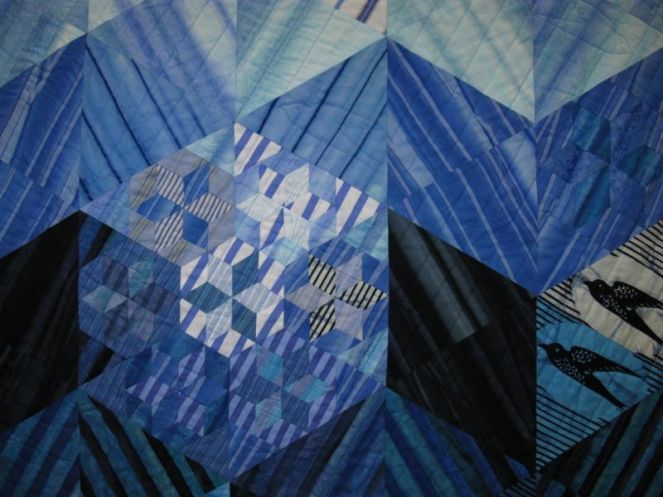 Detail, both of piecing and of the over-dyed bird fabrics.  Her use of stripes was masterful. 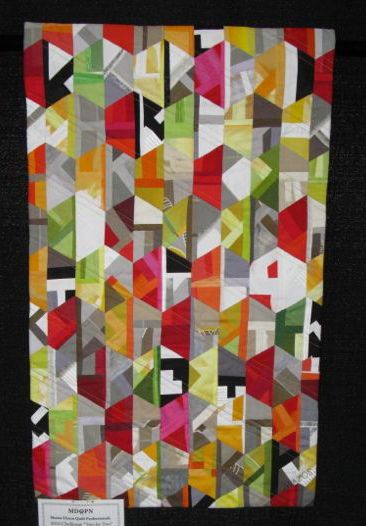 I can’t read the sign on this exquisite little pieced quilt of hexagons and free-form piecing.  It’s probably 2 feet high by about 18″ wide, and I loved it. [UPDATE: it is “Peace by Piece” by Violet Cavazos.]  It was hanging in the hallway near the back of the show along with what we called the Cow Quilts. 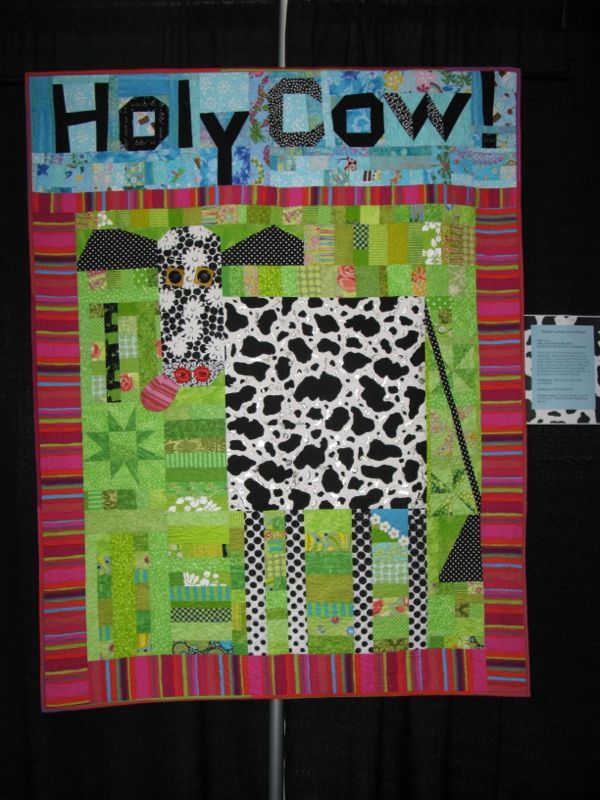 Holy Cow! by Melody B. Macfarland; quilted by Pam Dransfeldt. 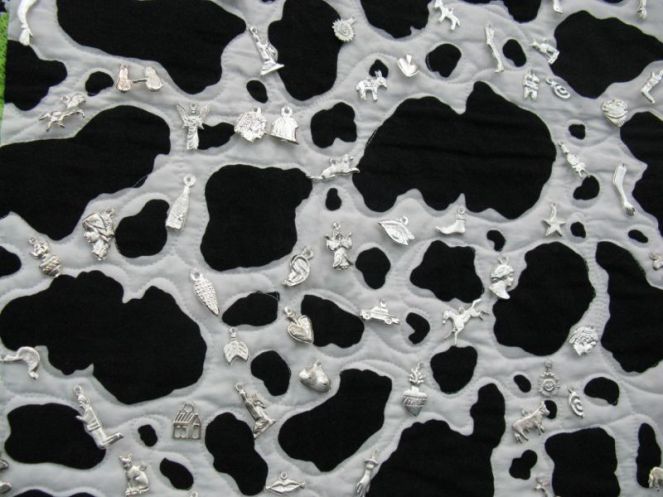 To go along with the theme of “holy” she had sewn milagros in among the cow’s spots. 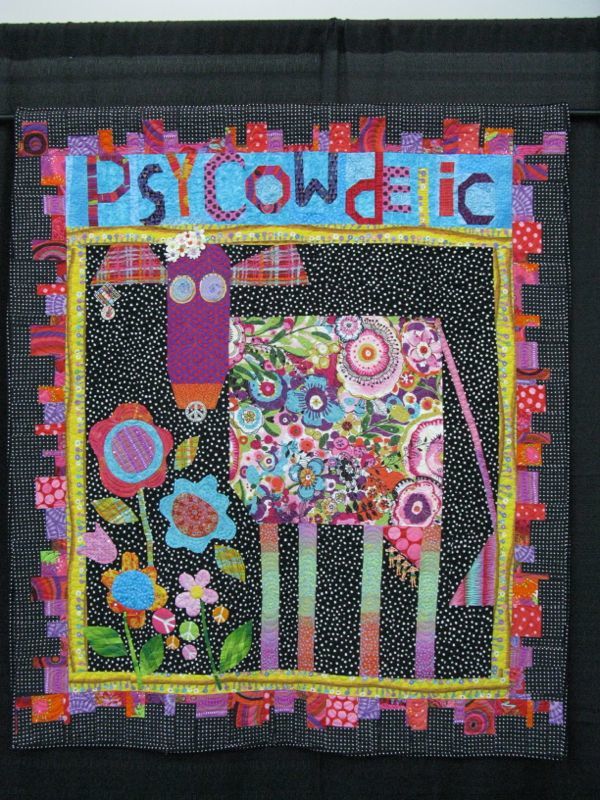 Apparently these are all from a book by Mary Lou Weidman, and her cow quilt, above is titled Psy-COW-delic.  It was quilted by Kathy Woods. 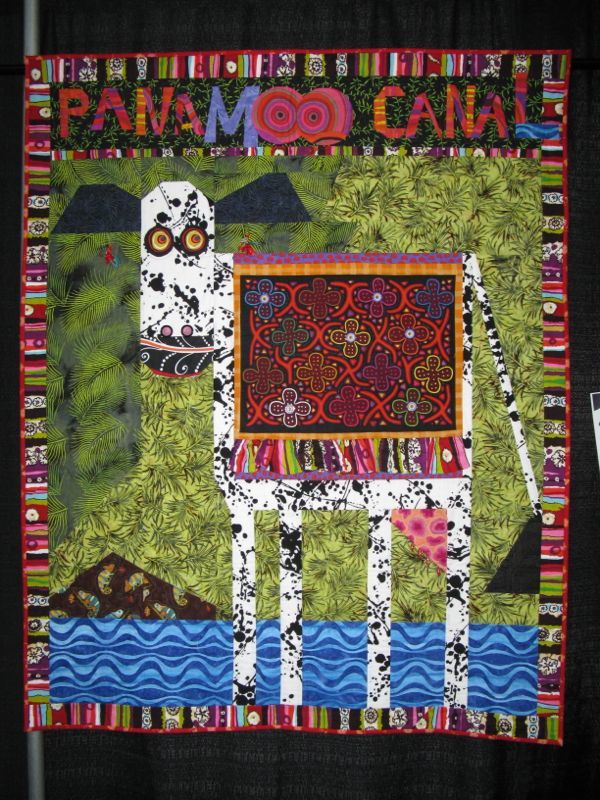 Pana-Moo-Canal, made and quilted by Susan Typpi, was inspired by a quilting cruise she took with Mary Lou Wiedman and all the mola (fabrics) she purchased while on the cruise.

Veggie Cow, made and quilted by Kathy Collins. 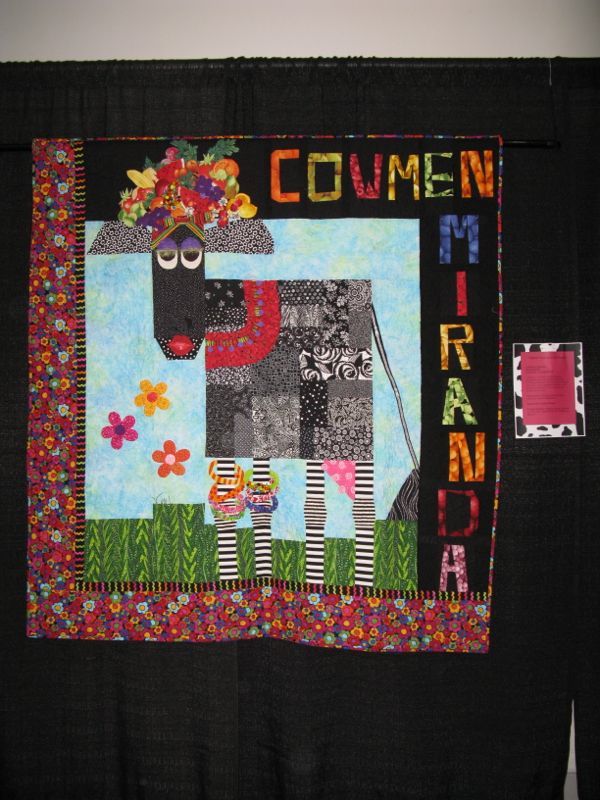 5 thoughts on “Road to California–part 3”