Yep, it’s Looky! Part II.  Applique is all done (obviously by the gap between posts, it’s evident that I’m not a quick appliquer), and I’m ready to attach the two side borders.  One of the difficulties of this quilt–with all due respect to its fabulous designers–is that the instructions are majorly confusing.  REALLY confusing.  And I don’t think I’m that dim of a bulb, either.

So while you may cut the borders according to the dimensions listed, that won’t be the finished width.  No, you now have to cut them down.  This is a problem if you have leaves and flowers that go near the edge.  I had puzzled over these directions before, and decided I would cut the borders closer to their finished width inititially, leaving a little extra.  So, I fudged on the instructions, not cutting the inner border as narrow as they called for (I was NOT keen about unpicking leaves and flowers).  In the photo above, I’ve folded back the leaves. 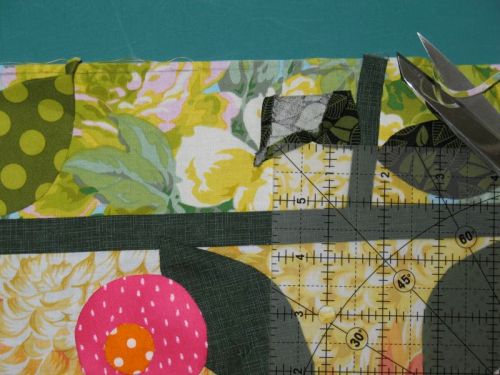 I’ve drawn the line and am trimming down the border. 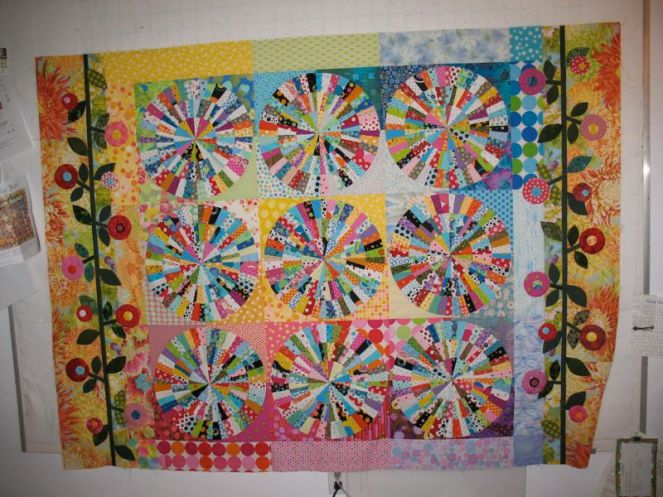 The two side borders, attached, and the extra blossoms and portions of leaves stitched down.  Thank you, Netflix and Downton Abbey, for keeping my brain engaged while I did more applique. 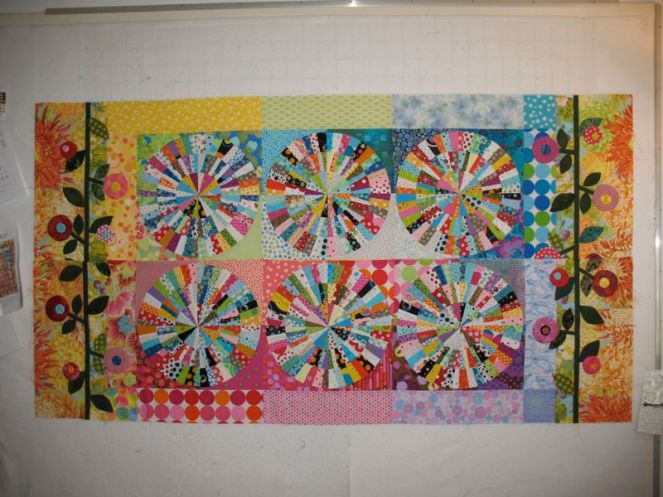 I had already determined that my pin wall wasn’t big enough to accommodate the next task: putting on the top and bottom borders.  So I “pleated” the quilt in half, and pinned it up.

Borders being tried out.  I’ve run out of the chrysanthemum fabric, but now know that there’s no need to obsess over those outer borders.  Just get the fabric up there, and get it sewn on.  So I tried to match the fabric in terms of value (light-to-dark) and hue (color).  I think I did okay.  Another reason why it’s taken me a while was because I was interrupted here and there by having to go to work (imagine!) and grade papers.  I should be doing that right now, but I wanted to get these photos up. It’ll be a late night.

Tomorrow after teaching, I’ll pin them on with my teensy applique pins and start stitching again.

It’s nice to be at this point (reprise).