My daughter and her children came last weekend, and then we had a big family party on Saturday.  But early that morning, before we even had to wash off the patio chairs, Barbara (my daughter) and I snuck out to a garage sale.  I’d heard about it the night before, at Quilt Night, and wanted to see it for myself.

Box after box after box after box of fabric.  Most had been purchased from a now-defunct dime store, and most were in pieces less than 1/2 yard.  Some was substandard fabric–cheap gauzy stuff with garish prints.  But a lot of it was worth looking through.

They’d dragged out their ping-pong tables, some sheets of plywood and set out a few stacks of fabrics to entice us.  I found a stack of ginghams.  More for my stash.  There were a few interesting vintage pillowcases/sheets.  I got a few of those.  Actually I turned one of the pillowcases into a bag in case I needed to pick up more. 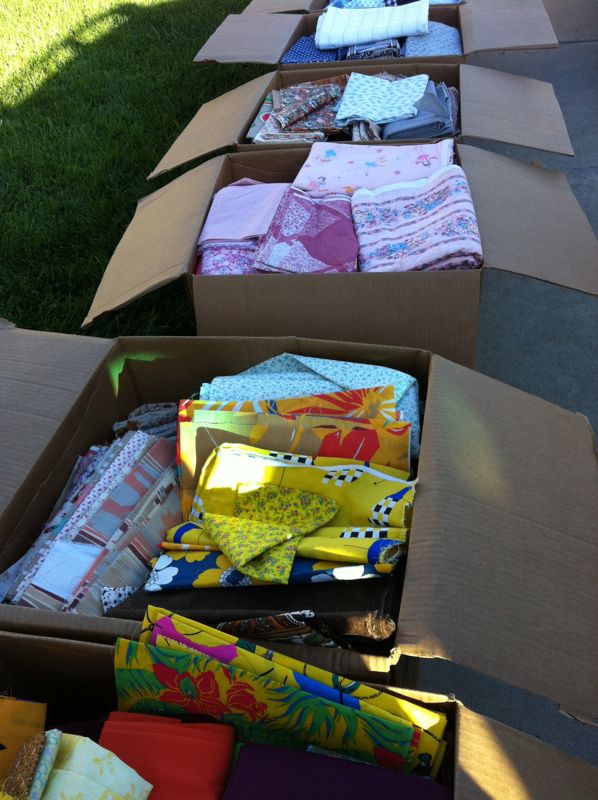 Can you believe all this?  Turns out the owner of this house didn’t collect it all.  He’s a realtor and to get the listing for a house he was pitching, they made him agree to clean out the old woman’s collection of fabric and books.  He called in a used book salesman and they took a slew. Then he dumped the rest of the books — 3 dumpsters full — which about broke my heart, because I’m a book lover. 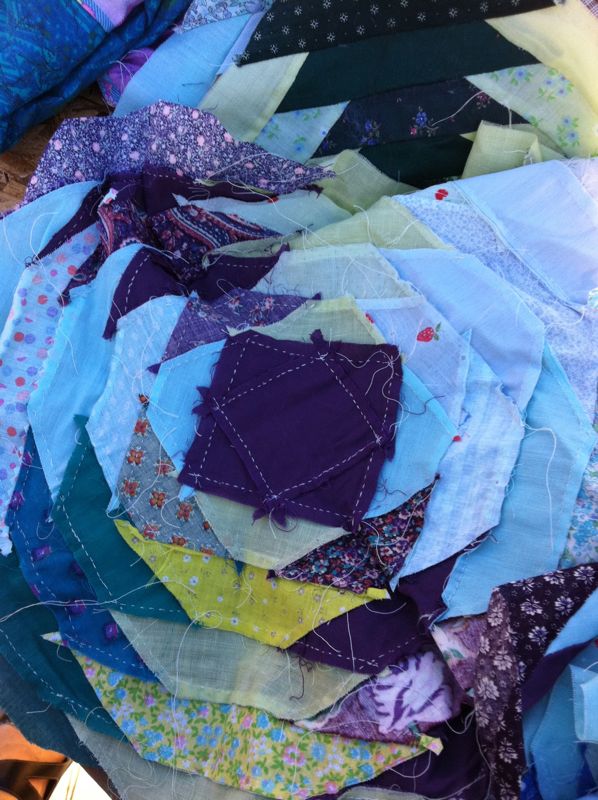 There were even some hand-pieced pineapple blocks, but I didn’t pick them up because I want to make my own pineapple quilt, and the combination of fabrics ranged from sheet batiste to a heavy twill.  And strange color combinations, as you can see.  By this time, as I was lugging my pillowcase of ginghams and sheets, the jokes started among the quilters that were there.  Can you see our daughters having to do this when we all kick off?  Poor Barbara, her friend Shawnie said.  Poor you, Barbara said.  Your mom’s a quilter, too.

I had tried to look through some of the boxes, because it was all just HERE waiting for us quilters to collect it.  But I’m used to the high-quality cottons from my local quilt shops and I remembered my husband home with all of Barbara’s kids and at some point, it all became just too much.  So I paid for my fabrics and threw the lumpy pillowcase into the back of the car.

I walked back and found what few books there were, and selected some to go.  Three of a four-book series on 1000 patchwork blocks.  It reminds me of my Encyclopedia of Quilt Pattern by Barbara Bachman, but a lot more home grown.  I’ve had fun looking through them.

So, I left most of the fabric there.  Be real.  Given the paltry amount in my pillowcase, I left all of it there, comparatively speaking. Lately I’ve been trying to shop my stash and to rediscover some of my earlier plans, so I was okay to leave all those possibilities there on the realtor’s driveway.  So noble. Such restraint.

Can’t say I didn’t think about it for the rest of the day, though.