This has a billion pictures, so get ready to scroll.  I need to wrap this up and bring my head back to what I’m doing in real life.  This is the final post of my visit to the European Patchwork Meeting in the Alsace region of France, this past September.  I have a main page that lists all the posts, in case you come at this from a side street on the web.

This quilt show, or meeting, was held in four different towns in France, and I’ll wrap up the first town, Sainte Marie Aux Mines, then move to St. Croix Aux Mines, and finally Liepvre.  We didn’t make it to the last town, Rombach le Franc, but Jodie Zolliger, who lives in Europe, has written several great posts about what she saw, including the Amish exhibit.  If you are interested, feel free to click over to her blog to catch more.

The Amish exhibit was beautifully laid out in this venue, and as I mentioned, Jodie wrote a great post about it, with better titles and information than I gathered.

We walked down to the Temple Reforme, where the Val Patch Association, the local guild, had an exhibit titled “La Maison,” or Home.  All of the quilts in that exhibit centered around the theme of home, showing slices of daily life.

I took a panoramic of the colorful quilts across one side of the church. 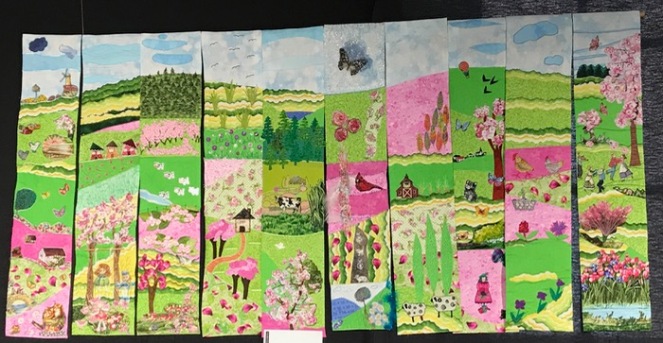 But fell in love with these panels, made by several members.  Jodie has a great post on this one, too.

Off we go to the next town.

I selected to head to the Espace Expositions first, to see the Beauville Company’s exhibition of prints from their archives, but was entranced by the skilled and exquisite use of log cabin construction by Andrew Leblanc in her quilts.   I am listing the sizes of the quilts in centimeters, as noted on their title signs.  (100 centimeters is roughly equal to 39 inches.)

It was pretty amazing to me how she’s used the width of the strips to create her portraits and pictures.  Again, the lighting was superb.

I laughed at this one, because my husband is a professor (but he doesn’t look like someone out of 10th century Russia, or what I thought this man looked like).  Detail of the glasses, below.

While this isn’t a figurative portrait, the use of these fabrics was so interesting–not ones you’d associate with creating a design of any kind.  Detail, below. 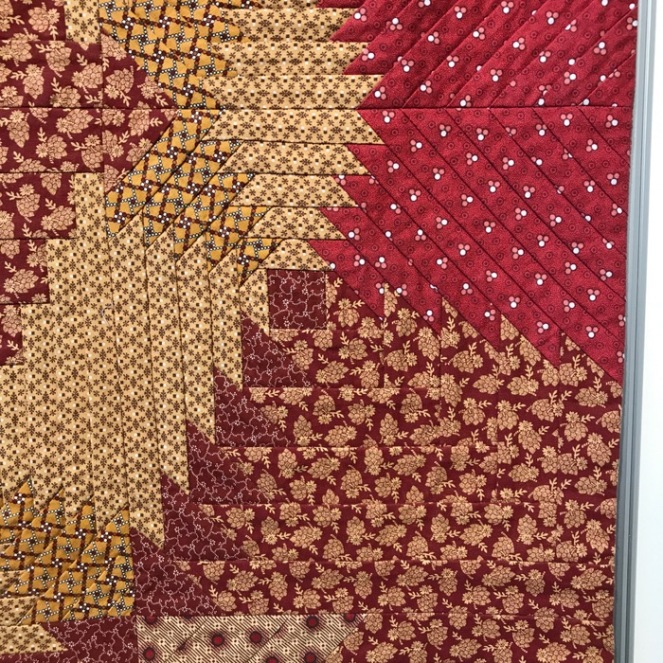 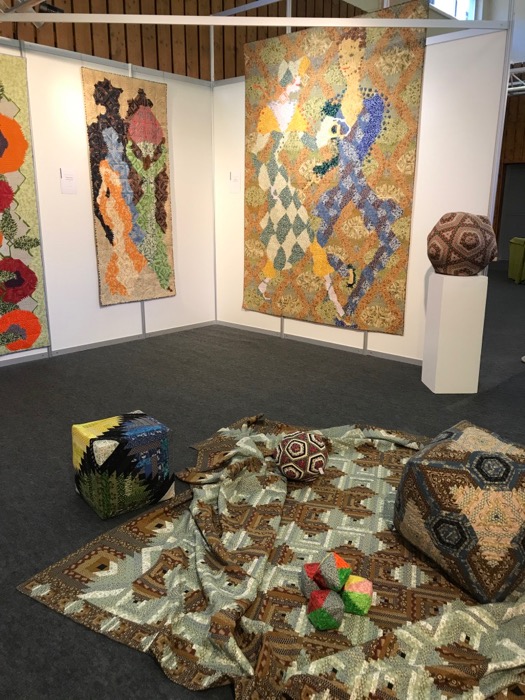 I like how they’d put other constructions of hers in a tableau on the floor.  She had many quilts there. 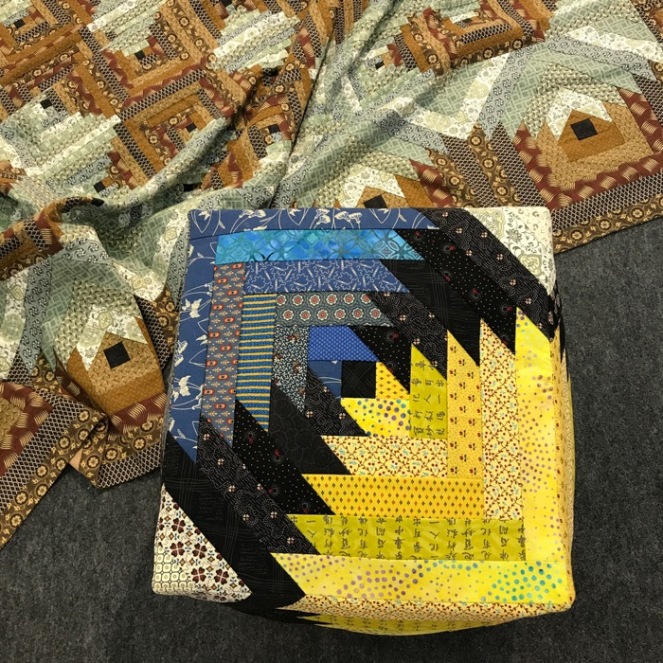 She was always busy talking to people at her table, so I could only get this sideways shot of her.  Her website shows many different parts of her creativity.

We headed down the road, again, to Liepvre (and try as I might, I cannot get my blogging program to allow the accents over their words, so I apologize–it keeps kicking them out when it spellchecks), to the Eglise de l’Assomption where an exhibit of Hildegard Muller (Germany) was hung.  The lighting was very “contrasty” so I did a little photoshopping on these to render them closer to what I saw. 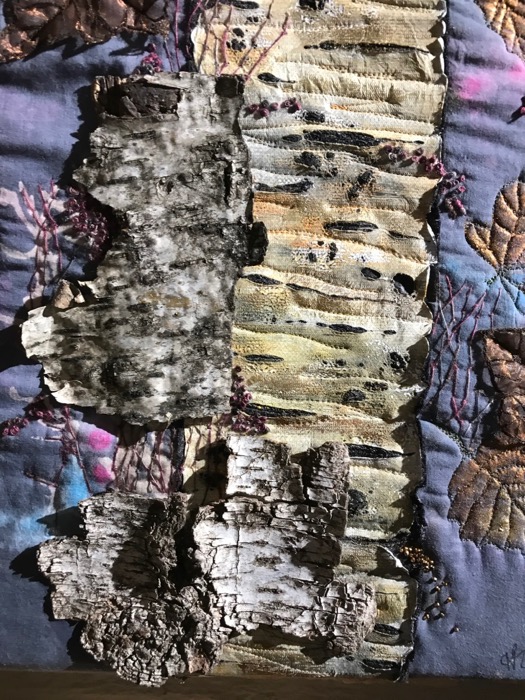 Detail.  She hand-dyed her fabrics and then let her mind find the scene that was in the cloth, or so she told me later, when I asked.  However, other times, she had an idea in mind when she was dying the cloth, and made it that way. 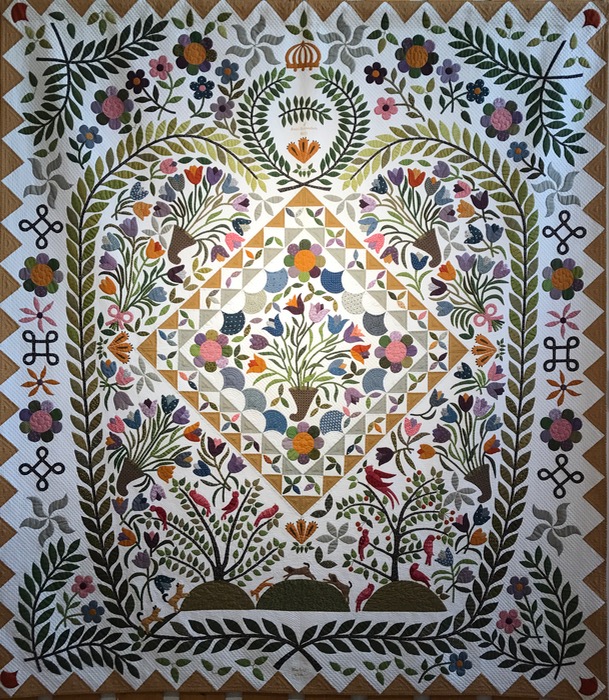 We walked from their to the Exhibition Hall to catch a couple of exhibits; we had to choose as we didn’t have time to see them all. So many of the quilts in this building were perfectly done, all Best-of-Show-type quilts.  The one above took my breath away, so I have a few details shots of it.  I loved that it was an imitation of one in the Shelbourne Museum — another way our patchwork influence crosses the ocean.  The title of the quilt was Marie-Henriette, and was made by Martine Crabe-Lanux. 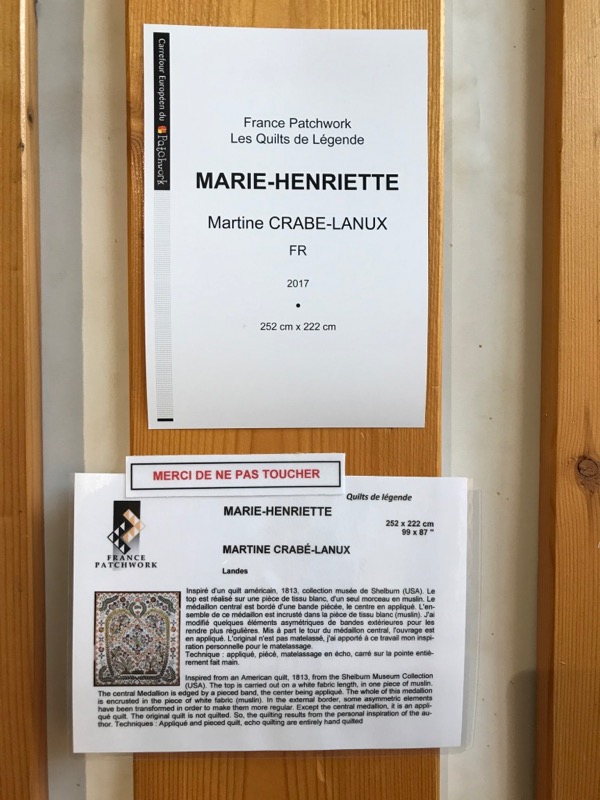 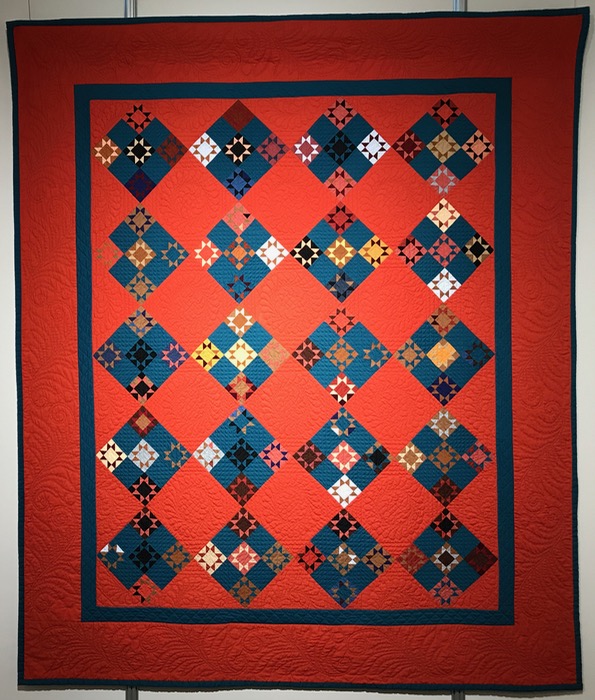 The Twinkle-Stars Remake Quilt by Helga Huisman Hildebrand was also in the “France Patchwork” association section.  There were several countries represented in this hall.

Another France Patchwork quilt, titled Bleus, and made by Maria Vuilleumier.

She also had one done in gray, black and white strips, but that one was called Insomnie, or Insomnia.  (Because I’m trying to wrap this up, I’ve heavily edited what I’m posting.)

Last section, last group of quilts is from the Patchwork Gilde of Germany.  These quilts blew me away.  Every year they have an exhibition and members are asked to enter what they’ve been working on (more info on the placard, below).  This grouping was titled “From Tradition to Modernity 21.”  Because your scrolling fingers are probably worn out at this point, I’ll post the title and the maker on the quilt; some titles are in German.

Okay, as near as Google could translate it, I think this means “Men’s Jewelry in Women’s Hand,” which I thought was really clever given that these are neckties.

Discarded, rearranged is how Google Translate interprets this title.

I was told that she teaches art at the local university.  This was stunning.

I talked for a few short minutes to the Uta Lenk, who was the International Representative of the German Patchwork Guild, and she said they would welcome the chance to exhibit at American shows.  I know our local show, Road to California, often has exhibits come from other places, and I would love to see these there.  I almost joined the German guild, but realized that all their materials would be in German, and alas, I wouldn’t be able to read them, but I did buy a pin.

All in all, going to the European Patchwork Meeting taught me that while we Americans fanned the flames of patchwork, the idea of three layers held together somehow, has taken wings, and taken off.  If I were to go again, I’d leave at least two days for the show, and perhaps stay somewhere closer (we stayed the first night in Mulhouse, about an hour away) and in Turckheim the second night (35 minutes away).  It’s near Colmar, and there is much to see in that town, as well.  And…bring an empty suitcase!