So, I really have to get serious about my Chuck Nohara quilt borders, because it’s acting like New Jersey’s Bridgegate: closing down my creative roads.

So here it is where I left it.  I think it looks really fabulous, but as I said, it’s beginning to haunt me.  So I’ve tried about four different versions of borders, but here’s just two so you get the idea of how hard this is:

So, now I’m thinking: pieced border.  I went back to the Chuck Nohara book and found a block that I think will work, but I took off the center circle.  Here’s my sample: 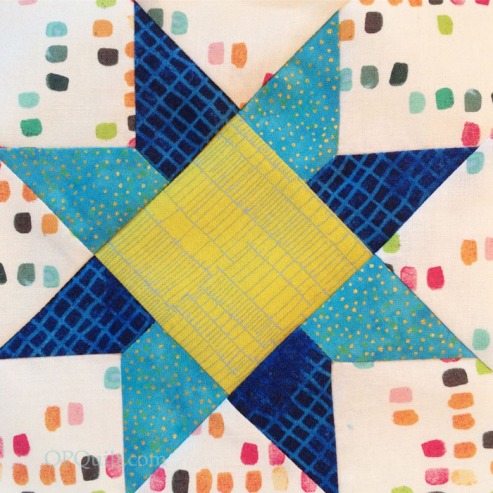 I decided also to make all the background in this one different from what I have in the center of the quilt, as this quilt — an idea I scoped out from looking at “Partnership Charity Blocks” from Japan:

In fact, after looking at all these (found here on my Pinterest Board), I wondered if the Chuck Nohara blocks were an outgrowth of these quilts made by quilters in Japan (or did her work come first, and then the quilts?).  Those who want to participate all make small six-inch blocks, submit them to the chairperson, who organizes then to be sewn into quilts which are then auctioned off for charity.

In her quilt in her book, Chuck Nohara sashed with small plus blocks, and I followed her lead.  But I liked, how in the quilt above, hexagon circle blocks (which look like signature blocks) created a border. 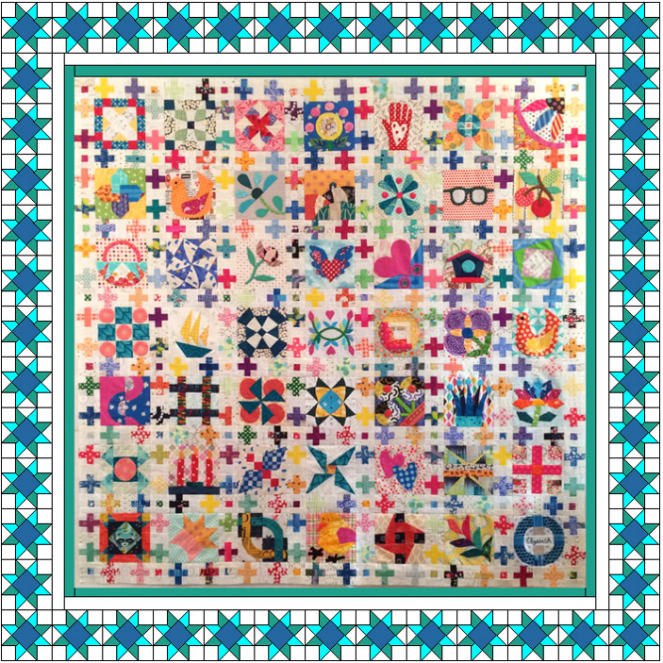 So I borrowed that idea of using a single block all around in the border.  Here’s my mock-up, done in my Quilt Pro quilt drawing software.  I had to include two smaller inner borders to get the right dimensions, but that’s okay, too.  It will help stabilize all that piecing.  (The back is as fun to look at as is the front.)

I cut a lot of pieces, but since those star points are alternating and directional (and I wrongly cut some fabrics back-to-back) I’ll have a lot of “extras.”  Oops.  Maybe I’ll make some more stars for another project.

Here are the blocks I’ve finished, residing next to the “quilt middle” on my design wall.  I decided to try and do a ombre-style effect with the block middle, moving from yellow to yellow-green to green to yellow-green back to yellow as it goes around the edge.  We’ll see if I can pull it off. 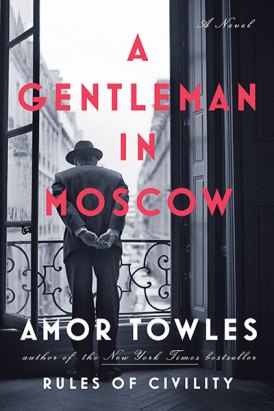 I’m listening to this, as I stitch away.  It took me a bit to get into it, but now I’m in the groove.  We could use a few more gentlemen and gentlewomen in the world these days; guess I’d better start with myself, learning how to seat people at dinner parties.

I can think about this as I make my 48 blocks.