Early this month, I got up at very early in the morning and drove an hour to the Palm Springs Convention Center (well, really, the hotel next door) as I was scheduled to take a class with Joe Cunningham during the recent Quiltfest Oasis Palm Springs, with its emphasis on Modern Quilts.  Libs Elliot was also teaching, but I was interested in Joe because of a video I’d watched about him and his quilting long ago.  He was on Craft in America, a series on PBS, and as he was the only quilter in the series at that time, I was amazed that he was teaching within an hour from my house.  I think I registered for QuiltFest on the first day, I was so excited.  To explain the video above: it was a lovely quirky thing, but he brought his guitar and sang and played for us.  Now I wish every conference class had live music like this: classic tunes, played on the guitar.  He even took my request and played  Blackbird (by the Beatles).  It was lovely.

To get our class started, he talked about how he approached quilts: “I think of something I want to “do” and then see how it looks.  The reason I’m making it is to find out what it looks like.”  He has a strict process, including the idea that since we are making chaos in our cutting and sewing, and it would be good to limit our fabrics to control the chaos.

So what was the class?  Basically it was the stripped down version of that joke we quilters all make: we cut fabric apart and sewed it back together.  However, first we had to choose our fabrics.  He’d told us to bring four 1 yard pieces of fabric; I brought six or seven, but really it was a relief not to haul my stash to a class (the usual).  He went around the room, and by what he said as helped us choose, I noticed the following ideas:

He then gave us a handout with a specific way of cutting and sewing the pieces back together.  I got to work.

We all sewed all morning, and before I left to get my lunch, I had the stack of blocks (above) all finished.

Lunch was at Sherman’s Deli, which was just around the corner from where we were working.  Three of us went over and got salads, then sat out on the pool deck at the hotel, enjoying the beautiful day.  Then it was back to work.

Basically it was to put all the blocks up on the wall, and make them work together.  Well, at first I felt like the story about the classes at QuiltCon 2015 with the Gee’s Bend Quilters.  All of the quilters sat there, expecting the Gee’s Bend Quilters to tell them how to sew.  But after their opening of a hymn and a prayer, they turned to the women in the class and said, “Well, get to sewing!”  (Told to me by someone who was in the class)

I fully expected to just make blocks according to Joe’s directions and have it stop there.  But amazingly, the language of design he was schooling us in started to make sense.  That first picture was just blocks slapped up there.  But then I could see the possibilities in mine, that he’d showed in someone else’s.  And I began to arrange them to some remarkable inner vibe and weirdness. Here are some of the other arrangements happening around the room: 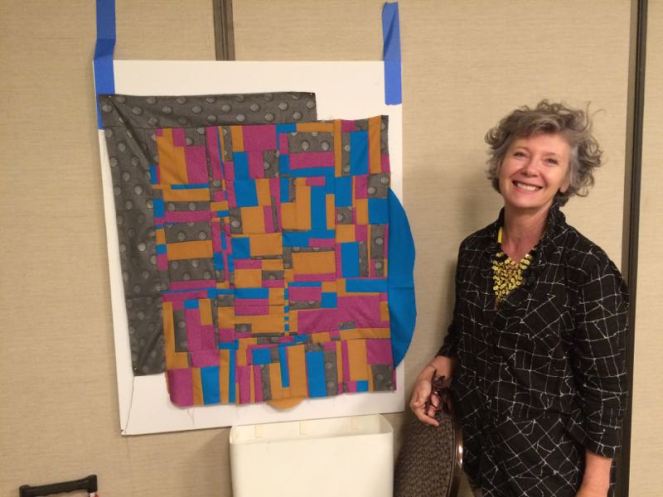 More music, more switching things around.  He was always available for help, but I wanted to try this strange magic all by myself.  After cutting, arranging, sewing, it just wasn’t happening.  Then I took a photo, flipped it 180 degrees and it was like the tumblers in a lock falling into place.

This is where I was at the end of the class, at 4 p.m.  I’m sure you are saying “what???” and I actually sort of agree.  I’m not really an improv person, because frankly I just never got that religion, but this technique of his was actually quite fun, and I didn’t waste the gallons of fabric I usually do when trying to do improv.

Everyone cleared out, but the organizers let me stay and work, since I was signed up for the lecture that night and really had no where to go.  I had a lunch with me so I wasn’t worried about dinner, and just wanted to keep going on the borders.  I had a great piece of greyed circles fabric with me, and I thought I would try to see if it could meld on what I was working on.  So I started by extending blocks of color out from the quilt, and filling in with the circles.  I got to the above right photo and it was five o’clock and I wanted a break before the lecture (plus ice my sore shoulder).

The nice guys at the pool deck bar let me have some ice, and I sat outside watching the gauzy curtains on these poolside bed/canopies float in the slight breeze, while eating my dinner and icing my shoulder.  It was a great break.  This conference was also on the same weekend as Desert Trip, that music festival with all the oldsters playing, and it had decimated the attendance at QuiltFest.  There were only six people in our class (amazing) and it turned out there were only four at the lecture that night (see next post).

So this is where it all ended.  It’s not a huge quilt–maybe 33″ square–but it was a good experience in trying a new method.  I thoroughly enjoyed myself!