Tracy and I headed out early this morning to have our own mini shop-hop, hitting a few stores that she knew about (she knows most all of the quilt shops around here). Click over to the interactive map to see where we went (I’ve also included the two shops I went to last week.)

Why a Google Map for my local fabric shops? When we went to England a couple of years ago, I was searching for information about York, and a local fellow had designed several “walks” that I printed out and we followed as we got to know the town. It was really helpful, and since then I’ve discovered many other helpful public maps on Google.

Is there a public fabric shop map for your town? A public “walks” map? We don’t have those kinds here in Southern California–our culture is car culture, whether it’s the best thing or not (it’s not).

The French fabrics have arrived and they are beautiful.

But this was yesterday’s work: cutting 250-plus 6″ blue squares (5 1/2″ finished).  Of course, I was delayed in the forward progress by running off to a couple of quilt shops to see if they had something to add to this melange.  That’s something I used to do a lot before Professoring and before the Internet.  I used to make the rounds, collecting colors, shades, patterns and I have to say it was a thoroughly enjoyable process.  There’s something unique about being involved with the tactile when selecting fabrics–the feel of the cloth, the hand, whether they are a rough texturey linen or a smoothly woven cotton.  Heading to a fabric store is also about the hunt: what will I find?  In yesterday’s case, not much.  That makes me glad that the internet exists, as in the case of the ability to find–and purchase–the French fabrics.

We have our region’s Quilters Run next weekend and both stores were slicked up in their Sunday Best, ready for the hordes.  All the bolts were lined up, edges folded in, notions arranged, with a variety of quilts on the wall or artfully draped over the displays.  In one corner of one store was a display of Featherweight machines of all kinds, as well as some vintage toy Singer sewing machines. 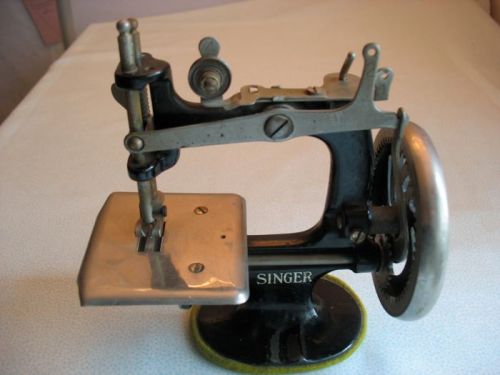 It reminded me of the toy Singer Sewing Machine machine that my mother used to play with and which she gave it to me a long time ago.  This one’s not as shiny or gussied up as the ones in the store but it has nice quality that those don’t others don’t: a remembrance of my mother.

But I did catch a look at the price they wanted for theirs: $145.00.  A non-toy Featherweight Singer sewing machine like the one I have (which I purchased at a garage sale) now goes for $495.00.  I told Dave that it’s nice to know that some of my treasures accrue in value without me doing anything but hanging out, living, and getting older.  I’m going to resist any gags about how they’re gaining in value as opposed to what’s happening to me, as I hang out, live and get older.

So what am I working on while I let Provence stew a little while on the pin wall?  The above photo is our bedroom, really the only room in the house that I consider nearly fully “decorated.”  Nothing else in my house looks like this, I can assure you.  See where the small darker blue quilt is folded up on the bottom of the bed?  This place needs its own quilt.

Luckily, I’ve been planning for this for a while, as witnessed by the array above.  Many of these you’ll recognize as Amy Butler prints from two cycles ago–yep, I’m usually that far behind on things.  I loved the pale grayed-down bluey-green of that line, if that is indeed some kind of description.  I”ve added a piece from her Love line on the right, as well as that fabulous geranium print from Rowan Fabrics (Is that a Martha Negley? The selvage doesn’t reveal it.)

After breaking my brain on the last couple of quilts, I want this one to be all about the fabric–so I’m planning just a random assortment of 5″ or 6″ blocks.  Yep.  A one-patch.

This could be the title for about the next million posts, I think.  I pulled everything off but the center and some pieces around the edge.  I talked with a couple of people I admire (Tracy and my husband) and they just weren’t with me on the green borders.  I tried to figure out why, and my husband noted the pieces that jumped out at him–the bright kelly greens. Time to listen a bit, I think.

I like the greens idea–of letting there be another border there, but my advisors were right: the greens that I was using were fighting the rest of the design.  So what’s a quilter to do?  BUY MORE FABRIC!  Of course!

But where to find such specialized fabric?  Like I mentioned before, it’s not like it’s at the corner quilt shop.  I remembered that I’d purchased the last lot at our local quilt show Road to California, and found French Connections, from North Carolina, on the vendor page of the quilt show website.  Success.  I wanted just about everything, but it can get pretty pricey if you get it all.  Their prices are very reasonable, considering what I’d seen in Lyon, France when I was there.  American quilt fabric in France was about $20 per yard; French fabric in America is about the same.

I sent in my order, and chatted with them this morning; the fabric should be here by the weekend, or the beginning of next week.  She also told me she’ll be at Long Beach, as well as Road to California 2011.  Two cross-country drives!  I appreciate the dedication of these quilt shop owners to help people like me get what they need to finish the green borders on a quilt.  Plus. . . a little brainstorm occurred when looking at her selection of fabrics–a little twist of an idea that’s typically Provence-ian.  Stay tuned for what I’ve got planned. 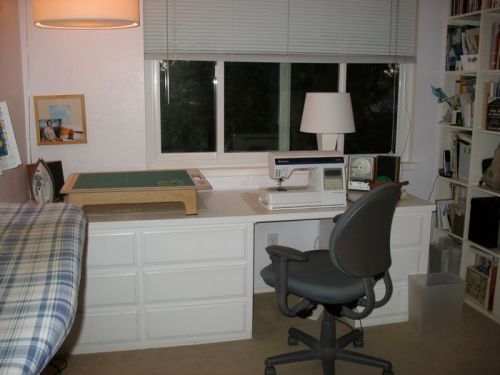 One bright spot about no fabric and being at a resting place: I cleaned up my sewing desk (and cleaned out three sewing drawers).  You may not see it this clean again until the end of summer.

I couldn’t resist this photo, especially with the naming of the bobbin “arc reactor.”

Having taught in various classes both in the community, for friends and at church, one of the dreaded experiences for a teacher is when  student brings in a machine that either a) barely functions, or b) they have no idea how to make the thing sew.  There’s a real temptation to stop the forward momentum of a class to help that person get their bobbin case untangled, or help the person figure out why the machine is eating their fabric.  I’ve found, though, that it’s better to press on, so as not to shortchange the others who are there, and instead, send vibes of sympathy to the struggling sewer.  A good machine–used or new–makes all the difference.

Still working on the Take Two of the Provence fabrics quilt. Still.

I cut out a bunch of golden yellow squares, and had to piece one of them back together from the previous quilt. Red squares distributed–thanks to my friend Tracy, I had just the right kind and color. 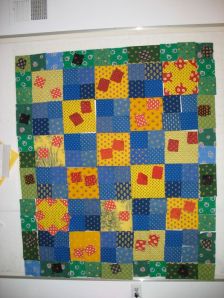 I’d found another similar quilt online, and freaked out that mine might be considered a derivative of that one, so I reworked the borders to make it really mine. I probably shouldn’t freak out, as I long ago realized that ofttimes there is a certain zeitgeist in the universe and creative and intellectual projects often overlap. Here’s that quilt; it does look like we stared up at the ceiling in Lyon’s Carolingan church and came away with the similar ideas.

My friend Tracy told me about an experience her sister had about someone apparently trying to claim a Dresden Plate idea as her own. It’s about as silly as Pioneer Woman claiming Texas Sheet Cake for her own (in a post on my cooking blog). So what is new? What qualifies as something truly different and profoundly unique? Once I heard that if an idea was 10% new it was pretty “out there,” and may not even be accepted by the public. Perhaps that’s why retro designs appeal to us–they are new without being new.

Sewing is a slow process, as there is a lot of figuring out of which red square/black square goes where, and the drawing of the line, sewing, cutting, pressing, up-and-down, up-and-down. Another challenge for this quilt was that I was bound by my desire to only use the French fabrics, and there was just no running out to the little shop in Aix-en-Provence in the south of France to pick up something that would work better. (That’s why Tracy’s gift was so opportune.) 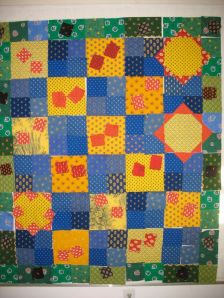 But the fun thing is “opening up” the reds around the yellow square.