Finished the first batch of English papers, so could get back to the Kaffe Fassett quilt I’d been working on. Today, I attached the inner pink border, then the wide grey-blue jungle print that I fell in love with at the Quilt Show.

I don’t have a name for it, but we keep saying “It’s pretty wild,” around our house. I’ll have to go and look in my Victorian Quote book for something blowsy, overblown and suitable.

At first, I wasn’t so sure about all these fabrics thrown together, but it’s grown on me.

Yesterday’s Washington Post had an article about the effort to place well-made quilts with wounded soldiers. Here are the photos from the article.

I’ve also pasted in the article below, if the link won’t work.

I belong to a guild in Virginia (Quilters Unlimited) which has contributed many quilts to this effort, so it feels very personal to me. 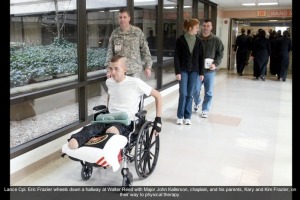 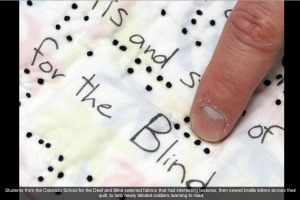 With Gratitude In Every Stitch
At Walter Reed, Wounded Troops Find Comfort in Donated Quilts

The carefully packed boxes stack up daily in the chaplain’s quarters at Walter Reed Army Medical Center, about 50 a week. The instructions read simply: “Please give this to a soldier.” Chaplain John L. Kallerson, an Army major, gently opens each one and places the contents around his windowless office. Then he lays his big hands on the piles and says a blessing.

His is the ministry of the quilts.

A phone call to the chaplain four years ago has created a national movement to say thank you to soldiers wounded in the war on terror.

More than 7,900 “comfort quilts,” each carefully stitched with love and gratitude, have been sent through the Quilts of Valor Foundation to the wounded soldiers at Walter Reed and 70 other U.S. military medical centers. Kallerson prays over and hands out quilts from church groups, schoolchildren, quilting bees. Quilts made from accomplished artists whose designs sell for thousands. Quilts with bears, fish, basketballs. Quilts with hot-pink flowers for wounded women.

Amish and Mennonites have sent them anonymously. Children at the Colorado School for the Deaf and the Blind have created Braille quilts for soldiers who have lost their sight. Some donors, such as Native Americans who sent quilts bearing warrior symbols, have requested that their quilts be given to kindred spirits. Many have special messages: “You are our hero.” “You are very brave.”

Some arrive with letters, tapes or prayers.

“This is a gift from the heartland,” Kallerson said. “Soldiers get CD players and iPods and DVDs, but this is the greatest gift of all. It comes from people’s hearts. This is a simple thank you for your service.”

Deborah Francisco, a defense contractor from St. Leonard, spent a year making one with the black and gold Army 1st Cavalry logo. “I hope the soldier who got it feels like someone is thinking of him,” Francisco said.

This is how it got started: An accomplished Delaware quilter, Catherine Roberts, contacted Kallerson. She wanted to sew a blue and white Ohio Star quilt and donate it to a wounded service member. For every soldier killed, she knew there were 10 wounded.

“I had this vision in my head of a soldier waking up with horrible flashbacks,” said Roberts, 57, a midwife and a quilter for 25 years. “I saw him wrapping himself up in a quilt.”

Kallerson talks to a lot of people who want to donate things, but the hospital doesn’t have the space or staff to handle them. Still, he was intrigued by Roberts’s offer. He had someone in mind, an amputee from Minnesota, who was experiencing phantom pain. He gratefully received the quilt.

Then Roberts realized that she needed to reach more soldiers. “I got all my quilting people together and told them we had to start making quilts for all the wounded. Plenty of people were sending goggles and rat traps and things like that to the soldiers in the war, and there were programs for the families of our fallen heroes. But I didn’t see anything targeting service members who had been wounded.”

She put out the word online to the 19 million-strong quilting community. E-mails started flooding back. “Many quilters remembered Vietnam days,” said Roberts, whose son, Nathanael Vinbury, served a year with the Army in Iraq. “They didn’t want our troops coming back to that kind of reception.”

Today, comfort quilts are part of the fabric of life at Walter Reed, helping to humanize the 308 government-issue beds, overlit hallways and hushed visitors lounges. As soldiers are wheeled to physical therapy or the endless tests, there is a rush of color from hand-stitched covers as they roll by. Many of the 600 wounded who come in daily for outpatient treatment have quilts folded under their legs or tucked around their bodies. Soldiers clutching the quilts have turned up at inaugural balls and Army-Navy football games.

Daniel Peters, 22, an Army combat engineer from Goffstown, N.H., received his red, white and blue quilt three months ago. It rarely leaves his side. “I use it every day to prop up my foot,” he said. All the toes on his right foot were severed in Afghanistan when the Taliban shot a rocket under his Humvee; he has had surgery to reattach them.

“It brought him a lot of comfort,” said his mother, Beverly Peters. “It showed him that someone cared.”

Quilting has been part of wartime America since the early 19th century. “It’s always been in the nature of quilters to have the urge to make something to cover soldiers, warm them and give them comfort,” said Karey Bresenhan, a nationally known quilting expert and co-founder of the Alliance for American Quilts.

During the Civil War, soldiers used quilts as bedrolls. Supporters of the Union Army banded together to send quilts to their men, and Southern women cut up their dresses to make quilts for Confederate soldiers. The Smithsonian’s National Museum of American History has 400 quilts in its collection, including one made in 1863 by Mrs. Gilbert Pullan’s Sunday school in Augusta, Maine, for Union soldiers in Washington hospitals. The Maine quilt is inscribed with Bible quotations, recipes for medicines and jokes.

In World War I, the Red Cross sold quilts, and in World War II quilts were sent to Europe to be given out to the wounded.

Today, soldiers aren’t taking quilts to war as much as using them during recovery. Kallerson conducts his wartime ministry from a cart. He loads it up and wheels it down Walter Reed’s halls. If men are skeptical about receiving a quilt, he approaches their wives or mothers. Many soldiers ask if the quilt is free. “They are shocked that someone has gone to the trouble of making this for them,” he said.

Eric Frazier, 20, of Altamont, Tenn., a Marine lance corporal, doesn’t even remember choosing a quilt because he was on morphine. He was wounded in October in Fallujah and lost both legs, one above the knee and one below, and suffered a head injury. “He could have chosen a pink one, he was so out of it,” said his father, Kary Frazier. Eric’s quilt is waiting for him at home, on his bed.

One person sent a Purple Heart quilt. Kallerson handed it to a decorated double amputee. “He told me he wasn’t sure he deserved it,” Kallerson recalled. “I thought if you don’t deserve a quilt, then I don’t know who does.”

Some of the quilts are becoming family heirlooms to be passed down to future generations.

Quilting groups across the country have used Roberts’s Web site — http://www.qovf.org&#8211; as a clearinghouse for information on comfort quilts. Roberts has made it possible for the groups that piece together quilt tops to connect with longarmers, people who own large machines that efficiently stitch the tops to batting and a backing. Hand quilters can take hours and hours to do this; by machine it takes three to 20 hours, depending on the design.

Lisa Langlais, a longarmer from Springfield, said she has donated her services for more than 60 quilts, including 30 she pieced herself. Longarmers can make $75 to $400 for machine-finishing a quilt.

Langlais has never met any of the service members who have received her quilts.

“This is an anonymous project,” she said. “I don’t expect a thank-you card. I just put all of my good, positive thoughts in the quilt.”

Kallerson has personally distributed 3,069 quilts. “One father brought me to tears,” he said. “He brought a quilt back to me because his son did not survive.”

Kallerson placed the quilt back into the father’s hands.